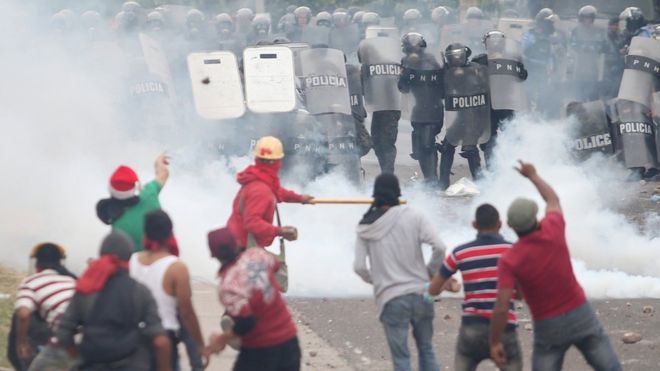 Tegucigalpa, May 24 (Prensa Latina) What many shouted loudly in Honduras seems to be true. Electoral fraud took Juan Orlando Hernández back to the Presidency, according to local press, politicians and personalities.

An article published by the BBC News World about Archimedes Group, indicates that this Israeli company had an impact on the last elections of 2017.

According to the report entitled “How Archimedes Group Operated”, the Israeli company has been blocked by Facebook and accused of interfering in the election of Mexico, Panama and Honduras, the group “put all their artillery at the service of disinformation in Honduras with the creation of fake news portals”.

In the case of Latin American countries and in particular of Honduras, a nation with one of the highest rates of violence in the world and experiencing a democratic crisis since the coup of 2009, it sought to irritate and polarize opinion.

One of the pages removed by Facebook was “My President JOH (Juan Orlando Hernández)”, with explicit support for Hernández’s policies.

Hernandez is the first president reelected in this country in a questioned election, a result that provoked a wave of protests with blockades in the main streets of Tegucigalpa and San Pedro Sula.

The Israeli group promoted its website until last Thursday, May 16, when Facebook blocked this Israeli company and its subsidiaries for “repeatedly violating the policy against misrepresentation, among others, and viralizing fictitious behavior”.

Archimedes Group, together with 65 accounts, 161 pages, 23 groups, 12 events and four Instagram profiles that coordinated to disseminate biased content about Latin American, African and South Asian politics, were removed from Facebook.

The group itself, a few hours after its ban, began to erase from its site blocks of text in which it admitted “using all available tools and advantages to change reality according to the wishes of its customers”.

One of the pages eliminated by Facebook corresponds to a profile dedicated to attacking former President Manuel Zelaya (2006-2009), and another in direct support of Hernández.

“This is how the international mafia operates that the DICTATORSHIP of JOH imposed on us for the benefit of big capital and its lackeys in HONDURAS,” wrote Zelaya (2006-2009) in his Twitter account.