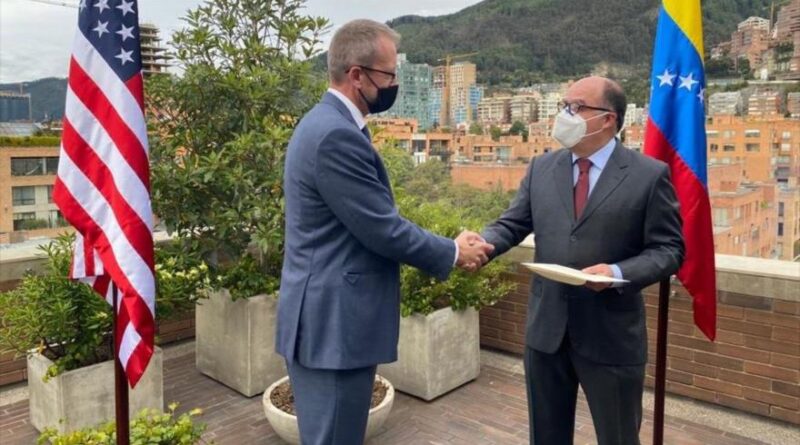 Venezuela scoffed at the presentation of credentials by the person in charge of the US “virtual embassy” in Colombia, pointing out that his office in Caracas awaits him.

James Story, assigned as the supposed US ambassador to Venezuela, delivered his credentials to the fugitive Venezuelan opposition politician Julio Borges, “envoy” of the self-proclaimed president of Venezuela, coup leader Juan Guaidó, on Monday in Bogotá, the Colombian capital, reflecting the White House’s commitment to the opposition and to regime change in Venezuela.

The Venezuelan Foreign Minister, Jorge Arreaza, in a message written on his Twitter account today, questioned the legitimacy of this action, and the hostility of the current administration of outgoing US President Donald Trump.

“I reiterate: when the new US Administration decides to respect the sovereignty of Venezuela and international law, your office in Caracas awaits you. Cheers!” wrote Arreaza.

Arreaza issued the message after Story invited the president of the South American country, Nicolás Maduro, and his foreign minister to “leave your questions or comments” on his FB Live program, broadcasted on Thursday on the Facebook platform. In this regard, the top diplomat of the South American country reminded Story to fully read the message he had sent about this media show on social networks.

In the framework of its pressure campaign to depose Maduro’s government, Washington recognized self-proclaimed Guaidó in January 2019 as the “president in charge” of Venezuela.

According to international analyst Amauri Chamorro, the recognition of any political figure as president of Venezuela without having been democratically elected shows that the hegemonic powers, including some countries of the European Union (EU) and the United States, are willing to constantly trample international law in order to forcefully implement their narrative on the world, and subordinate those countries that they believe should be under their rule.

Despite US efforts to oust the government of Caracas through incursions, sanctions and attempted coups, Maduro remains in power, thanks to the support of the majority of Venezuelans, in addition to the recognition of the United Nations.