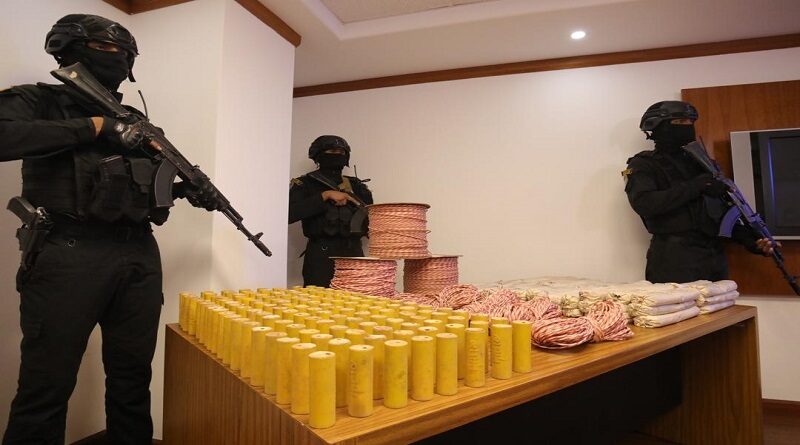 According to the information issued by the vice president, the two suspects were apprehended in Carabobo state, where 47 kilograms of explosive material were also seized, enough to destroy El Palito 47 times over. The two suspects under investigation are in the custody of the Public Ministry .

He explained that in addition to attacking the refinery itself, the explosion was intended to affect the main pipeline that pumps gasoline and other products from El Palito to the city of Yagua, which would not only cause damage to the refinery but could also have destroyed a large part of the city of Puerto Cabello.

He specified that this terrorist incursion was intended to be carried out before the last parliamentary elections of December 6 “to generate a national commotion and the suspension of the electoral process.”

El Aissami held the President of Colombia, Iván Duque, responsible for this criminal attempt, and said that this plan was undertaken by deserters from the Bolivarian National Armed Forces (FANB), who have the protection and support of the Colombian president. Likewise, he assured that the Colombian head of state “directly authorized this frustrated terrorist attack.”

He also pointed out that authorities from the neighboring country facilitated the transfer and irregular entry of the explosive material that would be used in this attack. “We regret that once again Colombia and its government are behind this criminal action,” he added.

1/ Venezuelan Minister @TareckPSUV informs of a new terror plot to blow up the El Palito refinery in Carabobo. Two ground guys were arrested and have confessed – this was obviously orchestrated by others; 47kg of explosive material seized. Again planned in Colombia. pic.twitter.com/RbdRjG5pJ5

The detainees were identified as: Francisco Javier Pérez and Cesar Antonio Guevara Díaz, from whom items of criminal interest were seized which “not only would have destroyed the refinery… but would have blown up half of Puerto Cabello.”

“They confessed everything, the contacts in Colombia, said El Aissami. “How did they contact them? Who called them? How much did they pay them? The second stage of this attack was an incursion by deserters and Colombian officers trained in Cúcuta to carry out this terrorist attack.”

“This attack is part of Iván Duque’s criminal record against the Venezuelan people,” he added. El Aissami called on the international community to repudiate these alleged actions against the people.

PDVSA workers were asked to be at maximum alert, to act quickly if needed, under the “banner of peace.”