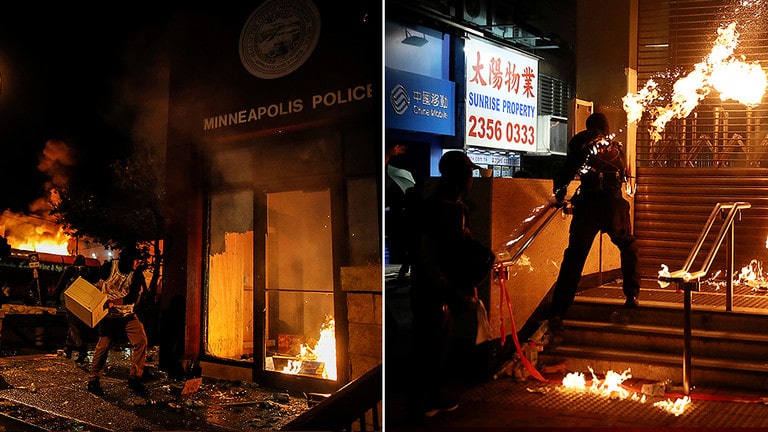 President Donald Trump has threatened to stamp out looting and riots in Minnesota with the military. However, his administration’s support for rioters in Hong Kong has drawn criticism from China’s most influential newspaper.

The death of an unarmed black man at the hands of two police officers in Minneapolis sparked a wave of rioting in the Minnesota city when a video of the incident was made public this week. Now, after three days of violence, looting and arson, President Trump has threatened to send in the military, warning the “thugs” involved that “when the looting starts, the shooting starts.”

Hu Xijin, editor-in-chief of China’s state-owned Global Times newspaper, trolled Trump on Friday for his apparent hypocrisy. As protests and riots consumed the semi-autonomous city of Hong Kong last winter, Trump signed an act mandating a yearly review of the city’s autonomy and allowing Washington to sanction Chinese officials it claimed had unfairly cracked down on the protests.

Just three days after unrest broke out in Minnesota, Trump threatened the use of "shooting" and announced the army supports the governor. I strongly condemn such threats. Please protect the people of Minnesota, just like you sympathize with Hong Kong thugs. pic.twitter.com/iemDDFTGMP

“Just three days after unrest broke out in Minnesota, Trump threatened the use of ‘shooting’ and announced the army supports the governor,” Xijin tweeted. “I strongly condemn such threats. Please protect the people of Minnesota, just like you sympathize with Hong Kong thugs.”

“Secretary Pompeo, please stand with the angry people of Minneapolis, just like you did with people of Hong Kong,” he tweeted.

Xijin’s opinion is widely considered to align with that of the Chinese Communist Party. As such, he is not the first Chinese official to criticize Trump for his government’s support of the Hong Kong protesters. Beijing has repeatedly called the policing of these protesters an internal matter, warning the US off “meddling” in Chinese affairs. The Chinese Foreign Ministry said last week that no country would let “separatists endanger security,” a prophetic statement given what transpired in Minneapolis just days later.

Racially charged rioting is nothing new in the US. Even the choking to death of George Floyd bore a striking resemblance to the death in 2014 of Eric Garner at the hands of an NYPD officer. Garner’s final utterance – “I can’t breathe” – became a rallying cry for anti-police protests across the country, and his death also triggered weeks of nationwide riots.

However, the violence in Minneapolis has thus far seen a police station burned to the ground and several retail outlets smashed, looted, and ram-raided. As rioters continued to ransack the city with apparent impunity on Thursday night, one of Trump’s “thugs”told a cameraman that the crowd of vandals were planning on “coming to the suburbs” next.

Xijin’s accusations of hypocrisy will likely fall on deaf ears. Not only does the Global Times represent a state that’s rapidly becoming a new Cold War-style adversary of the US, but Trump has always been an outspoken advocate of law enforcement and will not want to be seen as ‘weak’ on crime. With the streets of Minneapolis looking more like a foreign battlefield than an American city, Hong Kong will likely be the last thing on Trump’s mind.