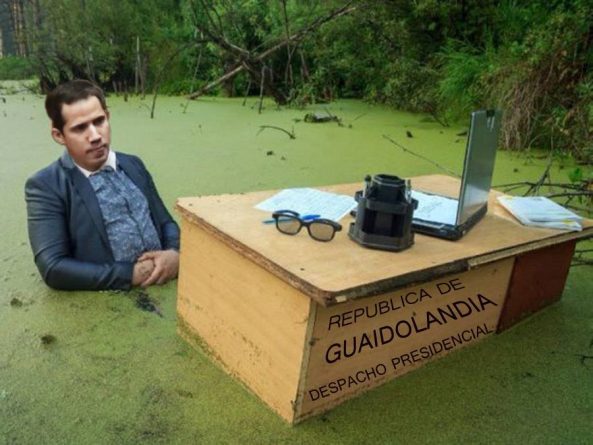 Ureña, Venezuela.- It’s the manager’s loneliness. Bogota, Colombia, has become the seat of government of the self-proclaimed president of Venezuela, Juan Guaidó. He does not command the army of his country. He is protected by the troops of a neighboring nation.

He has no control of any territory. His orders are not obeyed by any authority. Even his former opposition allies do not put their hands in the fire for him. At the worst moment of the February 23 crisis, almost none of them opened their mouths to encourage him. They chose to pay him with the same token that he used with them. His only significant internal support is his boss Leopoldo López.

Failed is his insurrectional intent, in which, under the pretext of forcing humanitarian aid intended to take territorial control of a border strip with Colombia, to install there headquarters of his administration, ended up establishing a ghostly government in exile .

But the only real support he has is the diplomatic one, on the part of the United States, Colombia and some other nations. He also has some supporters that are with him inside Venezuela. But they chew the bitter taste of defeat. They told them that Nicolás Maduro was leaving last weekend and he is still there.

However, although dressed in the guise of human rights, democracy and humanitarian aid, the support of Donald Trump is far from being disinterested. On page 136 of Andrew McCabe’s book, in which he reconstructs a meeting in the White House Oval Office in 2017, the former acting director of the FBI recalls: “Then the president spoke of Venezuela. It is the country with which we should go to war, he said. They have all that oil and they are right in our backyard .”

It does not seem like bravado. A senior Russian security official Tuesday accused the United States of deploying forces in Puerto Rico and Colombia in preparation for a military intervention in Venezuela to overthrow President Nicolás Maduro.

The transfer of US special operations forces to Puerto Rico, the landing of US forces in Colombia and other events indicate that the Pentagon is strengthening its troops in the region to use them in an operation to get Maduro out of power , Nikolai Pátrushev said, secretary of the Security Council of Russia, in an interview with the weekly Argumenty i Fakty .

Little by little, the cities bordering on Colombia begin to take on their traditional dynamic of life. As normal as it can be in a border region with intense commercial exchange when the passage of goods and people is closed. Shops open their doors (not all), people take to the streets and parents think about whether it is time to take their children to school or not.

The size of the normality can be appreciated, too, in that, on the Colombian side of the Simón Bolívar bridge, a group of Venezuelan guarimberos (rioters) asked the police of Venezuela to allow them to return to Venezuela. They complained that their leaders had summoned them and then left them hanging.

The stampede follows the defeat. Just last Monday, the police removed the container blocking the bridge, using tear gas and plastic shields. The young rioters who used it as a defense ran out to take refuge on the Colombian side of the border. When they realized that there they would no longer be protected, they put their feet back into the dust.

Ureña is an industrial city severely affected by economic strangulation and the closing of borders. It is also the territory of operation of the Colombian paramilitaries.

On the Francisco de Paula Santander international bridge that connects that city with Colombia, fierce confrontations took place on February 23. When you get there, you can see how the smoking remains of the humanitarian aid lie on the platforms of two huge trailers that were set on fire. The ground is covered with ashes, the remains of soda and beer bottles that served as Molotov cocktails, stones and metal artifacts.

Next to cans of tuna and crackers that survived the fire for some reason that only an experienced chemist can explain, there are rolls of wire and more rolls of wire, nails, nail clippers, whistles, locks, gel to lower the temperature. The indispensable kit of the “guarimbero” (rioter) . They are concentrated, above all, in the front of the truck’s platform.

The two trucks entered the Ureña bridge early in the morning on February 23. In the back of the second truck, under in the awning, there were groups of young rioters with their faces covered and heavy sheets of metal fencing from the Venezuelan aduana as shields. As Madeleine Garcia, of Telesur, reported, when a policeman took the key to the first vehicle preventing the caravan from following its lead on the bridge, the hooded men threw Molotov cocktails to set fire to the merchandise. They fanned the fire by throwing gasoline that they’d transported in plastic drums.

Simultaneously, in the rear of the position of the command of area No. 21 Táchira, Detachment No. 212, 3rd Company Ureña, groups of guarimberos took passenger buses, removing some of them by force from the school where they were parked. They broke the glass, they flattened their tires and set them on fire. In a pincer operation (operacion tenaza), the opponents surrounded the military and began to attack them with firecrackers fired from PVC bazookas, stones, sticks and Molotov cocktails. Some of the anti-Chavista fighters from Ureña came from outside the city. In this “pincer” operation, about 3 thousand people participated.

And while the Venezuelan political forces are preparing for a new phase of confrontation, the Jorge Ramos affair received significant media coverage in the Spanish-language press.

The Mexican Univision journalist and his team were expelled from Venezuela on Tuesday. From their hotel to the airport they were accompanied by diplomatic officials from the embassies of Mexico and the United States.

According to the journalist’s version, on Monday he interviewed President Nicolás Maduro at the Miraflores Palace, and after 17 minutes, the president suspended the session when Ramos showed him a video in which a group of young people eating from a garbage truck appear. The journalist and his Univision team were held there for two hours, interrogated and their equipment confiscated.

Before leaving Caracas, Ramos told Carmen Aristegui: I have suffered the dictatorship in my own flesh . And, upon arriving in Miami, he declared: what happened is an act of repression, a violation of international law, a violation of our right as journalists to ask any question. The bottom line is that our job is to keep asking uncomfortable questions to those in power. If we do not ask those uncomfortable questions, we are not doing journalism.

US journalist Max Blumenthal, editor of the Grayzone Project , asked Ramos at the airport if, now that he is back in Miami, he has plans to confront Marco Rubio for calling to assassinate Nicolás Maduro. The Univision journalist refused to answer the question. He just told him that many people in the United States are supporting what he did. Marco Rubio, Vice President Mike Pence and many others were supporting what we were doing .

Jorge Rodríguez, Minister of Communications of Chavismo, denied the journalist’s version. He assured that it was not true that they were detained. He said that, during the interview, Jorge Ramos called Maduro murderer and dictator several times.

“Through Miraflores have passed hundreds of journalists who have received the decent treatment that we habitually impart to those who come to fulfill their journalistic tasks, and have published the result of that work. We do not lend ourselves to cheap shows ,” said Rodriguez. He added: “At the same time that @ABC publishes an interview with the president @NicolasMaduro , the State Department (of the US) invents a new false positive with a show and a montage”.