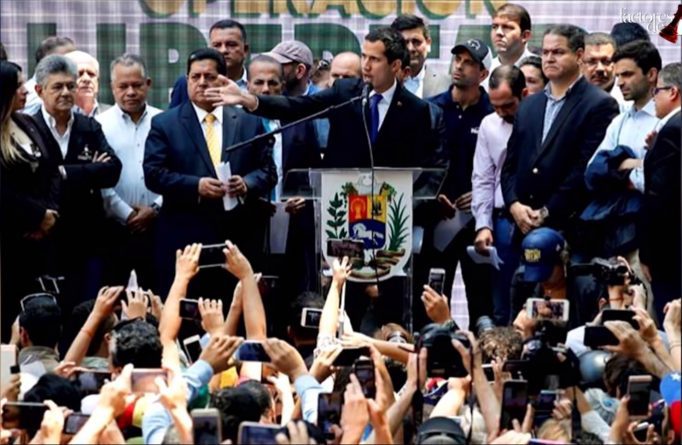 In the midst of a small group of supporters, the parliamentarian has asked his followers for “accompaniment” for his next call.

The head of Parliament, Juan Guaidó, self-proclaimed “president in charge” of Venezuela, announced a sixth “decisive date” to try to depose the government of the constitutional president, Nicolás Maduro, amid diminished support within the opposition’s own ranks in the South American country and the loss of support on an international scale.

“I stop here to ask for accompaniment,” Guaidó said Wednesday in front of a small group of supporters gathered at the headquarters of the Democratic Action (AD) party in Caracas, where he promised that on April 6 the “first actions” of ‘Operation Freedom’, as he has called his plan to march to the Miraflores Palace, seat of the national government.

Trump confirms that “all options” are on the table
While Guaidó declared, his wife, Fabiana Rosales, met with the US president, Donald Trump, who confirmed that the “options” on Venezuela are still on the table.

Trump made the statement at a press conference in which he also noted that “Russia has to leave” Venezuela, in reference to the presence in Caracas of Russian specialists who arrived in the capital, as part of the existing treaty of technical-military collaboration signed in 2001.

In response, the spokeswoman of the Ministry of Foreign Affairs of Russia, Maria Zakhárova, said that “before suggesting someone has to leave from somewhere, the US must implement its own exit concept, in particular from Syria.” “It’s been a month and I’d like to clarify, did they leave or not?” she said.

But beyond the support of the White House for Guaidó, the new street actions announced by the opposition deputy take place after a new setback: Germany announced that it will not recognize the ‘diplomatic ambassador’ Otto Gebauer, appointed by the head of Parliament, because the 30-day deadline to call presidential elections, according to the Constitution of the South American country, has expired.

New frictions
There was also a new friction within the opposition ranks. The deputy Gilber Caro, of the Voluntad Popular party, the same party where the head of Parliament serves, rejected the possibility of a foreign “intervention”, because he does not want to be “liberated by the US ” nor by “any foreign actor”.

Caro’s declaration caused a stir on social networks, especially in the opposition ranks. Most of the users rejected the deputy’s words for questioning the military way to depose President Maduro, an option that Guaidó did not rule out to solve the Venezuelan crisis.

The position of the deputy of Popular Will coincides with sectors of the so-called “democratic ” opposition , which repudiate the military route as an alternative to solve the political situation in Venezuela.

Last week, in an interview with RT, opposition leader Enrique Ochoa Antich questioned ‘Operation Libertad’, and said that seeking the clash of forces with Chavismo is “inciting a civil war.”

Similarly, he criticized Guaidó’s politics of ultimatum because it has not met the stated objectives: “It happened on January 10, on January 23, on February 12, on February 23, passed the “yes or yes” of humanitarian aid and there were no results, time goes by, an illusion was created for the population, this is what [opposition leader] Claudio Fermín calls a ‘deceptive offer’ and people start to realize it,” he said.