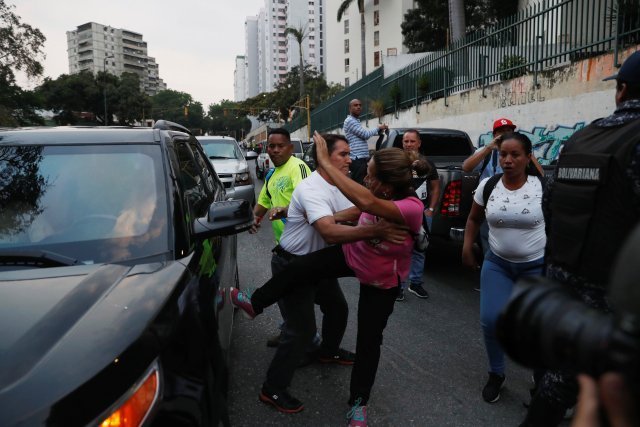 30/Mar/2019.- Yesterday the “Self-Proclaimed” planed a public meeting in a very combative working class neighborhood of Caracas -El Valle- in preparation for the demonstration the right-wingers organized for today to “take the Miraflores Palace”.

An angry mob formed of housewives, old people and all kind of Chavistas fed-up with the circus led by the US government using this despicable Venezuelan “politician”, try to attack the cars’s caravan of Guaido and -as can be seen in the video- his security was pretty aggressive and threaten to use weapons.

“We the chavista people are getting fed of the submissive speech of Guaido and the arrogance of the US government pretending to dictate us what to do, but we have been told by our Revolutionary leadership to avoid violence and that is exactly what happened yesterday when the “Policia Nacional Bolivariana” protected Guaido’s caravan. But the truth is that the regular Venezuelan is getting tire of seeing him walking freely allover Venezuela when everyone knows he is a criminal and a cup plotter”, told to OT a chavista activist.