See also Part I: “How a Colombian Ex-President Went to Bat for Trump in Florida”

The previous piece in this series explored how key right-wing Colombian political figures, namely President Iván Duque, ex-president Álvaro Uribe, and several senators from the ruling Centro Democrático Party, acted to influence the US elections in Florida last year in favor of Donald Trump and the GOP. Just months after this interference in the US elections, the same political forces in Colombia are now attempting to affect the outcome of Ecuador’s presidential contest, which will be decided by a runoff scheduled for April 11.

This latest example of Colombian political intervention began on January 30, a week before the first round of Ecuador’s presidential and legislative elections. That day, the right-wing Colombian magazine Semana, which is closely aligned with uribismo (the rightwing movement led by former president Uribe) and which models its journalism on Fox News, published an explosive article claiming that the left-wing National Liberation Army (ELN)—a guerrilla movement at war with the Colombian government—donated $80,000 to Andrés Arauz’s presidential campaign. Further, the magazine alleged that the transaction was facilitated by Ecuador’s former president Rafael Correa, who is currently exiled in Belgium. The claims are supposedly based on the private digital files of ELN leader Andrés Felipe Vanegas Londoño, known by the nom de guerre “Uriel,” which the military claims to have obtained in a Colombian military raid on an ELN encampment.

Problems emerged immediately, however, with the account published in Semana. According to the magazine’s sources, the ELN donation to Arauz’s campaign was coordinated during a September 2020 conference hosted by the Progressive International (PI), which counts Arauz and Correa among its council members, along with a number of other well-known left-leaning figures including Brazil’s former foreign minister Celso Amorim, former Greek finance minister Yanis Varoufakis, intellectuals Naomi Klein, Cornel West, Noam Chomsky, and Keeanga-Yamahtta Taylor, and actors Gael García Bernal and John Cusack. The event took place entirely online and can be viewed here. There is no plausible manner in which the alleged donation could have been coordinated during the event, which was at all times live-streamed. PI posted a statement categorically rejecting the allegations and noting that the group has no association of any kind with the ELN and that no ELN members were present at the event.

If any additional proof were needed of the fabricated nature of the ELN funding narrative, a video showing supposed ELN members endorsing Arauz and then firing their weapons in the air was met with heavy skepticism when a bird non-native to Colombia was heard whistling in the video. According to the ornithologist who pointed out the inconsistency, “the video could not have been filmed in Colombia.”

Despite their implausibility, the accusations of ELN funding have been heavily covered in Ecuadorian media, which is generally hostile toward Arauz’s candidacy. Likewise, Ecuador’s current president, Lenín Moreno, who has gone to great lengths to bar both Arauz and Correa from the ballot, recently sought to lend credence to the allegations. While the smears continue to be treated as serious “news” by the Ecuadorian press, even Semana’s director has admitted that they may be false, stating: “I want to make it absolutely clear, I am not saying that this information is absolutely certain.” Meanwhile, some independent media outlets have called attention to the conveniently timed nature of these revelations and pointed out that other left politicians in the region—including Correa—have been accused of connections to Colombian guerrillas based on similarly dubious “seized” computer files. It is conspicuous that, despite the initial media fervor around the Colombian government’s 2008 seizure of what has since been widely referred to as a “magic laptop,” even Correa’s most vociferous detractors in the US never mention the “evidence,” supposedly found in captured computer files, of his alleged connections to Colombian guerillas today.

As in Florida ahead of the 2020 US elections, senior Colombian government officials are inserting themselves in Ecuador’s elections by promoting this smear campaign ahead of the upcoming second-round vote. It’s worth noting, first of all, that the alleged ELN files appear to have been leaked to Semana by Colombian government sources, though we don’t know for sure. What we do know is that Colombian officials quickly played proactive role in the smear campaign against Arauz. Colombia’s attorney general, Francisco Barbosa, traveled to Quito on February 12 to formally deliver “evidence” in the Uriel case to his Ecuadorian counterpart, Diana Salazar. The visit, taking place only days after the first round of Ecuador’s election, was condemned by many as an act of unjustified intervention, including Colombia’s ex-president Ernesto Samper, who called it a case of “foul play.”

Nevertheless, Salazar is conducting an official investigation that could potentially be used as a pretext to prosecute a future president Arauz and remove him from power were he to win the presidency; or perhaps even prevent him from running in the run-off election, despite having far more votes than the runner-up. Salazar’s short tenure as attorney general (she was appointed in April 2019) has been mired in controversy due to her decision to jail two high-profile Moreno opponents on dubious charges of “rebellion,” based on their support for the massive indigenous-led anti-government protests of October 2019. Salazar also led efforts to prosecute former president Rafael Correa, resulting in an eight-year sentence against Correa based on charges of “psychic influence” over an alleged corruption ring.

In spite of her controversial and seemingly politically-driven prosecutorial record, Salazar recently received an “anti-corruption” award from the US State Department. Were Salazar merely to announce charges against Arauz, it could undermine his candidacy, no matter how baseless the charges might be, and regardless of whether they lead to prosecution.

Ecuador’s elections have also been rocked by allegations of fraud from the first round’s third-place finisher, Indigenous leader and Pachakutik party candidate, Yaku Pérez. Pérez, who finished with just 32,000 fewer votes than right-wing banker Guillermo Lasso, has spent weeks pushing for a recount while claiming massive fraud, to little success. Pérez’s allegations appear to stem from the fact that the early count put him in second place, but he finished third later in the vote count. Therefore fraud must have taken place. This argument might sound familiar, and Ecuadorian political cartoonists have made the connection between Pérez’s “stop the steal” campaign and Donald Trump’s. Pérez’s third-place finish behind Lasso was predictable, and predicted, based on the geographic distribution of uncounted ballots following initial returns in the hours after polls closed on February 7. Nevertheless, Pérez has peddled an ill-conceived conspiracy theory that somehow the electoral authority, Arauz, Correa, and Lasso colluded to keep him from participating in the runoff. The CNE ultimately rejected Pérez’s appeal for an additional recount and an electoral court later rejected Pérez’s demand for a recount of 50 percent of the votes, noting that there was insufficient evidence to warrant the demand.

Undeterred, Pérez appears to have endorsed one right-wing commentator’s call for the military to intervene in the elections in order to “prevent the return of Correísmo.” Pérez has shared, on social media, an El Comercio op-ed by Simón Espinosa Cordero, a member of Ecuador’s anti-corruption commission, calling for Ecuador’s armed forces to take control of the electoral process and force an immediate ruling on the alleged ELN financing of Arauz’s campaign. Espinosa’s op-ed cites the ELN allegation from Colombia as among the prime reasons for the military intervention, a point which Pérez reiterates in his own demands for the armed forces to intervene and force an immediate ruling on the alleged ELN financing. What is now clear is that multiple political forces in Colombia and Ecuador are making use of these smears to try and damage and even block the front-runner in his efforts to win the Ecuadorian presidency. 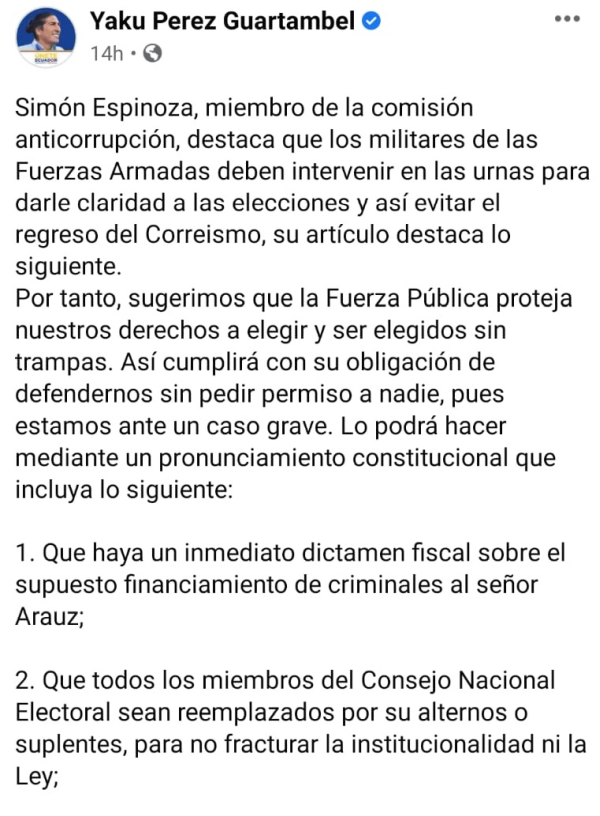 Colombia’s right-wing government has now intervened in both the 2020 US elections and in Ecuador’s 2021 elections, using red-baiting tactics to fear monger about “socialism” in Florida and to wage a smear campaign intended to tank the candidacy of the likely next president of Ecuador. This electoral interference could end up having significant implications for Ecuador’s relations with Colombia, and for the region more widely, which increasingly seems polarized between a resurgent “pink tide” and far-right governments and movements that appear to be continuing to receive support from the US government.