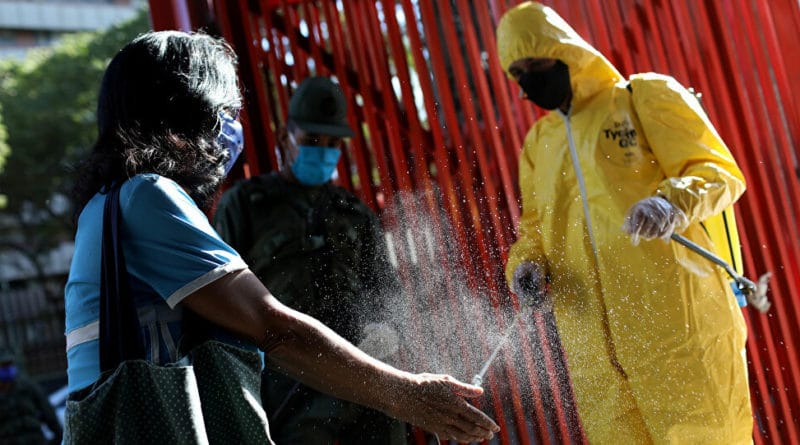 On Friday, March 13, Venezuela and Uruguay confirmed the first cases of coronavirus in their territories, finishing painting the Latin American map of the pandemic. After a month, the southern country of 3.5 million inhabitants is more than twice as infected as the Bolivarian Republic, with a population nine times higher. What happened?

Every day since the mandatory quarantine began on March 17, Venezuelan President Nicolás Maduro speaks on television and radio in the afternoon. So do the vice president, Delcy Rodríguez, and the communication minister, Jorge Rodríguez. It is a part of the situation: new cases of people infected by coronavirus in the country, how it was spread, geographic location, age, and the number of deaths.

The information also covered the evolution of quarantine and its compliance, the arrival of medical supplies from allied countries, such as China, Russia and Cuba, international organizations such as the Pan American Health Organization (PAHO), the situation of the pandemic in Latin America, the world, in order to place the picture of Venezuela in perspective and the evolution of the contagion curve.

The Venezuelan government began the decisive measures to avoid an uncontrolled outbreak of coronavirus very quickly. Those decisions involved millions of people in voluntary quarantine, the closure of cities, a large part of the movement of the economy and, for that reason, a daily pedagogy of the situation, the dangers and the data were launched.

This decision to face the pandemic early is one of the reasons that explain why the contagion curve did not accelerate vertically as in other countries of the world, such as Italy, Spain, the United States, or in the region, such as Ecuador and Brazil. So, on Thursday, April 9, a total of 171 cases were reported in Venezuela, 65 recovered and 9 deceased.

“We have a flattened curve, that is, very few cases come out daily, and therefore we have a care system for these cases,” explains Dr. Héctor Ciavaldini, currently a university professor at the Military Hospital and the Milagro Mission. This reality is due to two central measures that were taken.

Coronavirus in Venezuela: how does it stop?

The Venezuelan government “observed with great responsibility what was happening in the world without taking it lightly and it gave it time to prepare,” explains Ciavaldini. The pandemic, before reaching Latin America, and in particular Venezuela, advanced through different countries, modifying its epicenter of infections.

Upon arriving on the continent and threatening the country, the decision made was to initiate a border closure, the quarantine of seven states and, 24 hours later, what was announced as a total quarantine.

“That is one of the main measures that helped prevent the virus from spreading here, because social isolation breaks the contact chain,” says Dr. Ciavaldini.

The quarantine was accompanied by the use of facemasks in public space. Thus, from one day to the next, the country stopped to a great extent, the streets were almost empty, and all the people circulating began to wear masks bought in pharmacies, manufactured in homes or in community organization centers.

The quarantine decision was then immediate and the response of the majority of society was to respect it, a situation that, predictably, takes on more and more complications, particularly economic ones, as the weeks drag on.

These measures were “very important to prevent the spread of the coronavirus.” At the forefront of these measures was a “special committee to direct everything related to the epidemic,” called the Presidential Committee for the Prevention of Coronavirus, with international advice, mainly from China and Cuba.

The closure of the cities and the country was accompanied by what Maduro called “expanded and personalized screening”. This is the other key aspect highlighted by Dr. Ciavaldini

“We had the possibility of carrying out a large survey at the national level because we have a tool, which is the Patria System —a centralized database by the State— where more than 20 million Venezuelans are registered.”

Through this technological tool, millions of people indicated online if they had possible symptoms of coronavirus. The government, with that information, deployed the process of visiting each case with, if necessary, screening carried out free of charge.

“According to the survey system, and according to a system implemented with comprehensive community medical care supported by Cuban doctors, they are going house to house to investigate those people who are at risk of having acquired the infection.”

Jorge Rodríguez points out that 17,854,850 people have answered the Patria System medical survey, which showed 128,000 individuals with a wide range of symptoms, of whom 124,201 have been visited through the “house-by-house” deployment.

The survey “allowed the government to know the additional risk factors, those suffering from hypertension, diabetes, respiratory diseases, who are susceptible at the time of an epidemic to trigger the complications of the disease.”

This massive and personalized process was combined with the measures taken with those who came and still come from abroad . At first, particularly with people arriving via international flights from the most affected areas worldwide and, at the moment, with those who return by land from nearby countries , mainly Ecuador, Peru and Colombia.

“Cases that come from abroad are placed as possibly infected, their temperature is taken, they undergo a medical examination and they are placed in quarantine, and those who begin to be symptomatic are immediately screened for coronavirus.”

RELATED CONTENT: President Maduro Spoke by Phone with Xi Jinping About the Fight Against Covid-19

On Wednesday April the 8th, more than 90 tons of medical equipment and supplies from the Pan American Health Organization, UNICEF and Russia arrived in Venezuela for the prevention and control of the coronavirus.

International cooperation has been another of the pillars of the response within a comprehensive approach to the pandemic in the case of a country that is, in this context, under an economic blockade sponsored by the United States.

The aid, with the acquisition of equipment, supplies and medicines, has made it possible to strengthen “the preparation of care centers, both public and private, which were made available for care from the first moment of a probable epidemic that was to come to the country “, explains Ciavaldini.

The different levels of health care were strengthened: “Hospitals were placed in service of a probable epidemic, tents were placed in annex to receive symptomatic people, to do a triage before the disease was detected and from there, the respective tests.”

This strengthening also occurred with the comprehensive diagnosis centers (CDI’s), focal points to carry out the coronavirus test free of charge, and to address care for the pandemic in a process of house-to-house visits, articulated with the communal, popular organization.

The set of measures allowed keeping the contagion curve under control, and preparation for a possible scenario of increased cases. Dr. Ciavaldini raises the importance of maintaining quarantine so that the situation remains like this:

“If we were to suspend quarantine, with any number of few cases, which most of the time are asymptomatic, that are there, the epidemic could be unleashed and the curve would increase exponentially as it has happened in various parts of the world.”

Ciavaldini raises another central question: the impossibility of an isolated solution, country by country: “It is very important that the curve be flattened in the countries that surround us and the whole world. Colombia and Brazil currently have a really regrettable projection, and while the epidemic continues its course there, here we cannot claim victory. ”

The prospect of a quarantine exit is uncertain at the moment, both in time and in form. Ciavaldini mentions the possibility of “periodic quarantines” mentioned by Jorge Rodríguez, where “we go out on the street in a monitored system, probably everyone with a mask, a lot of vigilance, and when there is an outbreak, they go back to quarantine.”

The possibility of a definitive solution implies the appearance of a vaccine, or of a “viricide, a medicine that can destroy the virus, which if an infected person presents, can destroy the virus without complications in the health of the individual and does not spread the illness.”

In this regard, the Venezuelan doctor states: “I have heard about two medications, ivermectin, which is an antiparasitic, apparently there is evidence that they have seen in vitro, that is, outside of humans, that has inhibited or killed the virus. And there is another substance, chlorine dioxide, which is very promising. ”

At the moment, what are used are “adjuvant treatments, that is, they are aimed not so much at killing the virus as such, but at the complications of patients who acquire the infection.”

While working on the discovery of a virucidal, or a vaccine – which it has been publicly stated that it could take between 12 and 18 months – the objective is to keep the curve under control, decrease new cases to zero, and recover those who have become ill. This process, a fragile one taking into account the complexity of the epidemic, is what Venezuela seeks to achieve and maintain.