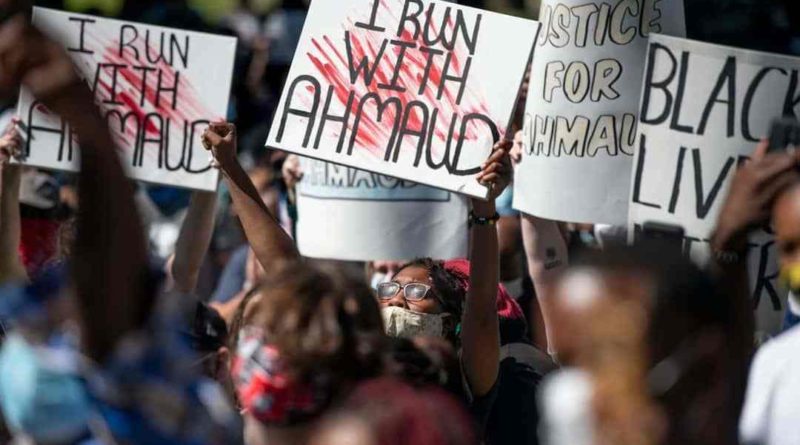 We need to start by understanding the nature of slavery. Slavery is a condition in which one must work for a master, follow his rules, exist within the narrow confines of expression he allows, remain docile and obedient, be grateful for his meager handouts, never organize, never rebel, be kept from education, not share in the fruits of one’s labor, worship his god, speak his language, bend oneself to his comfort.

Black people are a slave class in America. We enjoy none of the same freedoms, rights or safeties afforded to white citizens. Though slavery has morphed in name — chattel, Jim Crowism, forced labor camps, wage slavery, prison-industrial complex — it has not morphed in practice. We eat scraps, bathe in poisoned water, are barred from home and land ownership, denied the right to vote.

Ahmaud Arbery likely felt as close to freedom as he could on the early afternoon of Feb. 23. On an open road, running, seemingly alone, hopefully unbothered. Though we live under the constant threat of white violence, we try to move forward as normally as possible, build our lives, shape our futures.

I have been in Ahmaud’s position too many times. As a competitive runner since age five, I was often out on country roads alone. Cars often wouldn’t come by for hours and I would generally feel free, unburdened — broken only on days an occasional “N*****!” was screeched out of a car window.

It wasn’t until an evening run in my late teens when a cargo van passed me, slowed down, stopped in my path and turned off their lights. In less than moments, I had to make vital decisions. In front of me, home and the van. I would have to pass them, hope they were just trying to scare me or be ready to outrun them if they weren’t. If I turned around to run the other way, it was into nothingness, even further from help. I knew the possibility of guns. No one would even hear me scream.

I kept running forward, feeling propelled to try to make it home. As I closed the meters toward the van, another car drove by in a rare stroke of luck and the van took off. I never ran in the evening again. Later, my younger sister was almost abducted by white supremacists in a truck in broad daylight. When my grandmother tried to reach the police and the FBI, they told her there was nothing they could do.

I cannot stop replaying the thoughts inside Ahmaud’s head. I know what he was living through in that moment the truck cut him off: To turn and be chased into some strange and unfamiliar place, to hope these monsters were just trying to scare him and would back away after they got out their “n******” and “boys,” or to try to run on, to just get home, to hope that there was help on the other side.

RELATED CONTENT: The Coronavirus Was an Emergency Until Trump Found Out Who Was Dying

Ahmaud didn’t have a choice. Gregory McMichael and Travis McMichael had made up their minds. They were out for blood. Ahmaud was their prey. In their minds, he had stepped outside the bounds of their prescribed slavery, had violated them with his very existence, and they were intent on his execution.

They were then celebrated and exalted for their murder. Why were they not held as terrorists? Charged with committing a horrendous hate crime? Because they fulfill the white supremacist corporatocracy agenda.

Just as Dylan Roof was congratulated with a delicate arrest and a Burger King treat, Ahmaud’s murderers were applauded by the police and the corrupt district attorney. These forces that have historically condoned the lynchings of Black people. It is only because of the circulation of the video that there was any accountability. Imagine how many other Black joggers, walkers, skippers, breathers, swimmers, drivers, bus riders, bikers and sunset watchers have been gunned down in cold blood.

This one was on video. It is the only reason there was an arrest. What must his family have gone through? These months, having to fight for justice as well as his legacy. Labeled a thief. And what if he was a thief? Someone’s possessions are worth a life? A slave’s life? Of course. We are property to them, nothing more.

We must look plainly at Ahmaud’s execution, and we must look plainly at our existence. Capitalism was built on slavery and cannot exist without a slave class. Ahmaud was murdered because this system needed him dead or in servitude. His freedom, his run, did not serve the capitalist system and so like any rebellious slave, he was lynched.

Without unity, without mobilization, without the complete eradication of capitalism, we will never be free. We will continue to slave under new masters and exist under the conditions they prescribe to us.

Featured image: Protesters at the Glynn County Courthouse in Brunswick, Ga., where Ahmaud Arbery was shot and killed, May 9.