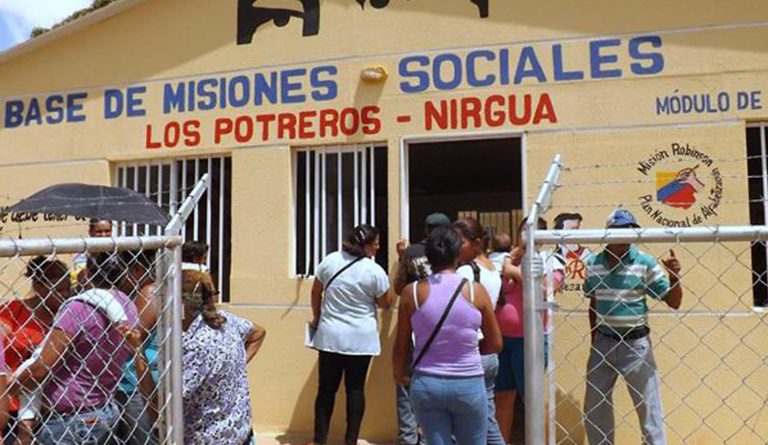 The dimension of the economic war against the Venezuelan people must be seen. It’s been 7 years since transnational and national monopolies have put us in queues and jumping from place to place to get vital goods (food, medicine and hygiene products). Our currency, the Bolivar, has been attacked by 29,862,393,456%: in 2012 the exchange rate was 8.69 BsF / US $, today the criminal portals, without criteria or economic support, only political and of war, mark 2,595,042,000 BsF / US $ (we have erased several zeros in the process) which has caused prices to rise since 2013 without pause.

This war, without historical precedents for its dimensions, began in 1999 and intensified in 2013. The Venezuelan people have not only resisted, they have been, heroically, insurgent. An unexplained phenomenon for Donald Trump and his advisors, to the point that even John Bolton lost his job.

Something we the Venezuelans have been doing that US imperialism fails to decipher.

Lessons from the war. It is a class struggle: what once seemed rhetorical is now lived day by day. It is clear that a class struggle underlies when in the circuit of private markets the relationship wage, price and profit raised by Marx is gross. The accelerated and disproportionate increase in prices, as a result of the attack on the currency and the logic of the capitalist market, plummets the real wage, to the point that the worker fails to cover his material needs. The worker who bakes bread and receives a salary of 40,000 BsS / month, that is, a little more than 1,000 BsS / day, cannot acquire even one of the many tens of loaves he bakes daily. The price of each loaf is 10,000 BsS. The difference (between the price and his salary) is in the (retailer’s) surplus.

The myth of the inefficiency of the State: Imagine that in these times of war we do not have a national public health system that provides service to 85% of the population (beyond the deficiencies that characterize it). Imagine that there was no immunization plan that guarantees, for the public, a vaccination coverage greater than 90%.

Imagine that the only option was to acquire the vaccines for our children in dollars, as requested in private health service providers. In these times of war, where is the “efficient” private sector? How many people are going to private clinics and at what price? And insurers, what amount do they cover? Where is the response to the public coming from? From the public sector or from the private one?

Imagine there were no public schools, high schools and universities that receive 90% of our children and youth. Are private schools and universities those who in these times of war are guaranteeing access to education? Let’s continue with the exercise of imagination and suppose that in these times of war there was no School Feeding Program. Imagine Caracas without Metro. Imagine homes without Clap.

Meanwhile, in terms of industrial and commercial activity, 98.71% and 99.87% belong to the private sector respectively. The public sector does not produce precooked cornmeal, rice, pasta, oil, margarine, toilet paper, toothpaste, or medicines, the private sector does, especially the transnationals, which have been complaining and demanding cheap foreign exchange for seven years from the state to fulfill its responsibility to supply the Venezuelan people.

In this scenario, who are the most efficient, the State that generates 98% of the country’s currencies or private companies that do not export more than 2%? The government that provides health and education services to more than 85% of the population, or large companies that are only waiting for cheap currencies?

The golden opportunity: Only by strengthening the public, collective, state and communal sector will we defeat the economic war. It is time to move forward in the construction of Bolivarian socialism of the 21st century.

Falling into the monetarist trap and definancing the public administration on the grounds that money cannot be issued because it is the cause of inflation is equivalent to joining the enemy’s strategy. In times of war when wages deteriorate as a result of currency attacks, it is essential to strengthen the public and communal sector. It is the only guarantee of access to vital goods by the people and in the process we are building the socialism of the 21st century. In 2003, before the general employer’s strike, Chavez’s strategy was to strengthen the public.

Imagine this war without the missions. Also organized: Despite all attempts by imperialism to destabilize, demoralize and demobilize, the Venezuelan people rise up in this war in a conscious and organized way. In the territory, in commune, we train, inform, communicate, learn, invent, resolve and mobilize. We are organized in the local supply and production committees, in the Bolívar Chávez battle units, in the militia, in the communal councils, in the productive councils of workers, in the health committees, in the missions, in Unamujer, among others.

The wounds of this war are deep and also very painful, but the Venezuelan people have endured and resisted insurgently.

The “failed” socialist model. Opinionists on the right say that the cause of what we Venezuelans live today is the “failed” socialist model. Failed for whom? Between 1980 and 1998 within the framework of a neoliberal capitalist model, the economy grew 52% and extreme poverty increased 132%. Between 1999 and 2015 the economy grew 43% and poverty decreased 56% despite the siege, war and sabotage that Venezuelans have faced since 1999. Venezuela remains the least unequal country in Latin America.