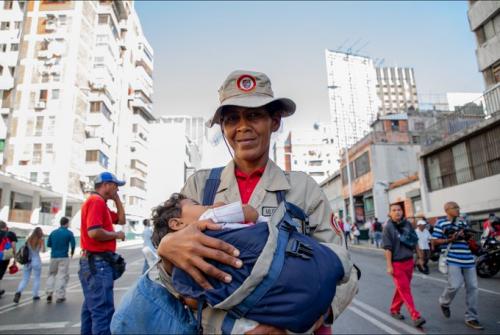 March 8, International Women’s Day, is a date to reflect on Venezuela, on achievements, successes, mistakes, advances, struggles for gender equality, condemn machismo and demand that men and women obtain the same rights and freedoms, as established by the Organic Law on the Rights of Women to a Life Free of Violence. Let us not forget that its purpose is “to guarantee and promote the right of women to a life free of violence, creating conditions to prevent, address, punish and eradicate violence in any of its manifestations and areas, promoting changes in the socio-cultural patterns that support gender inequality and power relations over women, to favor the construction of a just democratic, participatory, peer and leading society”.

This commemoration comes after the tragedy that occurred in 1908, where more than 100 workers were burned to death at the Cotton Textile Factory in Washington Square, New York, for requesting a reduction in working hours, fair wages, an event that had effects and which served as a reference, as it set a precedent.

Given its importance, the gender expert and human rights defender, Judith López Guevara, was interviewed, she said that the date is conducive to highlight that “women have embarked on a long struggle for our rights, an example is in the Declaration of the Rights of Women and the Citizen, written in 1791 by Olympe de Gouges, who fought for equality, against slavery and in favor of women’s rights, who was of a strong revolutionary conviction for the time, and who was guillotined in November 1793 in Paris, after the purge that followed the French Revolution.”

Her son publicly denied her for fear of being arrested. France and the world have buried her for over 250 years. She advocated the abolition of marriage and the establishment of divorce, for the recognition of children born out of wedlock, and proposed a renewable annual contract to be signed by the spouses. Her name should be recalled in these times of feminist struggles.

As part of the interview, López Guevara acknowledged that “it is not enough to say that we are feminists and defenders of rights for gender equality if our practices say otherwise, if we are not able to feel what happens to the other and nor are we in solidarity before difficulties, when we lock ourselves in four walls of an office or get carried away by bureaucracy and begin to act as bureaucrats, without evaluating or measuring the results and advances of gender policies.”

The economist also indicated that “the revolutionaries have the commitment to maintain this process and continue moving towards the communal state. We have fought for decades to make these achievements and advances in gender matters possible, many are no longer here; they gave their lives to achieve a better world, with fairness, respect. It is up to those of us who are to keep moving forward until the transformation of this capitalist society, which divides man and woman, exploits us and turns us into merchandise. We are a little more than half of the world’s population, we must achieve the organization of all for a common goal to eradicate violence.”

She recalled a study conducted by the CAF (Andean Development Bank), which states that, despite significant advances in the fight for gender equity, today women still do not have the same educational and employment opportunities as men, and remain in traditional family roles to a greater extent than in advanced economies. Another very serious scourge is feminicide, which has been galloping by leaps and bounds in the world and Venezuela does not escape it despite all the legal advances that exist so far.

On the other hand, López Guevara said that “it is not enough to change the name of something and make it socialist and say that we have already done the work, if the social relations of production do not change. It is the facts that determine your behavior, I could tell you, for example, that many women have ceased their employment relationship with the National Women’s Institute – INAMUJER – for more than a year and their social benefits have not been paid, this is a violation of their rights, because the Organic Labor Law , created in this revolutionary process, gives priority, as the commander and revolutionary leader, Hugo Chávez, will teach us in his valuable and clear “strike to the helm” [speech]; for that reason, to be revolutionary is not decreed, nor is it to be dressed in red, it is your behavior that determines you”.

As for the socialist processes carried out on an international scale, “there are leaps, all revolutions in any field indicate the new, but a while ago we know that it is not easy, [it isn’t] that suddenly there is light and or everything before was darkness; behind it, there is an experience of struggle, militancy and discipline, some absent and those present passing 50 years of age. On the contrary, as Mao said in the 30s and 40s about the Chinese revolution, the flame of the revolution is created and kept alive by young people, adults and the elderly, wrestlers and fighters, acting and learning together”, acknowledged López Guevara.

Lucía Berbeo is a Venezuelan journalist, political analyst and collaborator of Alainet .