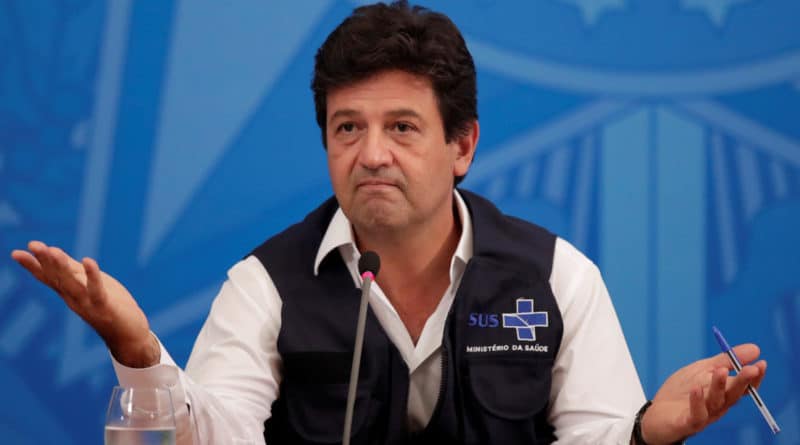 The President of Brazil, Jair Bolsonaro, kicked out his Health Minister, Luiz Henrique Mandetta, with whom the president had been fighting for several weeks. Bolsonaro announced oncologist Nelson Teich as Mandetta’s replacement.

The measure was expected but involves enormous health and political risks since the country is expected to enter the most acute moment of the coronavirus pandemic shortly.

The dismissal was confirmed by the Health Minister himself. “I just heard from President Jair Bolsonaro the notice of my dismissal from the Ministry of Health. I want to give my thanks for the opportunity that was given to me,” said Mandetta on the social network Twitter.

The announcement of Mandetta’s departure from office sparked immediate protests in different neighborhoods in different cities in Brazil. Mandetta also had the support of a good part of the population, the majority of Congress, and the recognition of Supreme Court judges.

The minister was in favor of generalized measures of social distancing, which Bolsonaro opposes despite the spread of the Covid-19 that Brazil is experiencing.

Like many ministers and high officials, like Bolsonaro himself, Mandetta is a retired military man, as well as a right-wing deputy. The 55-year-old Health Minister worked as an army doctor, which granted him extra immunity among the military circle that surrounds Bolsonaro in the Planalto palace, who advised the president to keep him in office when Mandetta, a week ago, even emptied the drawers of his desk before the imminent dismissal.

A divided population
A constant tug of war between the head of state and his minister has the population divided between two completely contradictory positions. And that has caused some to go out to show their outrage with daily cacelorazos from the balconies, while others begin to relax the confinement recommended in the vast majority of states, where in many cases the closure of schools and shops was decreed.

Mandetta himself acknowledged this last Sunday in an interview with Globo TV and that, in his words, has caused his position to be threatened again. In it, the minister affirmed that the Brazilians do not know whether to listen to him or Bolsonaro. He also criticized those who violate isolation.

“When you see people entering a bakery, in a supermarket, approaching each other, touching each other, people picnicking in parks, crowds, that is clearly wrong,” he said. A statement [that was] considered an indirect criticism of Bolsonaro, since in recent weeks he starred in at least two controversial outings, one of them to a bakery where he talked and photographed himself with the workers.

The last episode in this story took place on Wednesday when Mandetta’s number two, epidemiologist Wanderson de Oliveira, resigned and the minister did not accept his resignation.

“We enter together, we are together and we will leave the ministry together,” said Mandetta, who, according to Folha de Sao Paulo, on Tuesday warned his team that the [administration] was looking for a substitute.

The highest rated minister
Although last week the now former minister even emptied the drawers of his desk, he is determined to resist to the end. “I will remain until they find a person to take my place,” he commented in another interview to Veja magazine, in which he made it clear that he will not remain in the government.

“I have been in this battle for 60 days. That tires anyone! 60 days of measuring words. You speak today, the person understands, says he agrees, then changes his mind and says everything differently. You go, you talk, it seems that everything is fixed and then the speech changes again. Enough, right? We have helped already,” he concluded.

The Datafolha poll from the beginning of April places Mandetta as the government’s highest-rated minister, with 76% support. “I think Mandetta has played a very important role in the coronavirus crisis, because unlike other members of the government, he has had a very calm dialogue with society, which has allowed people to understand the seriousness of the situation,” says the analyst and professor Creomar de Souza, founder of Dharma Political Risk and Strategy.

“We are facing a worrying situation for the future because the president is probably going to replace the most popular of his ministers, ” he added.