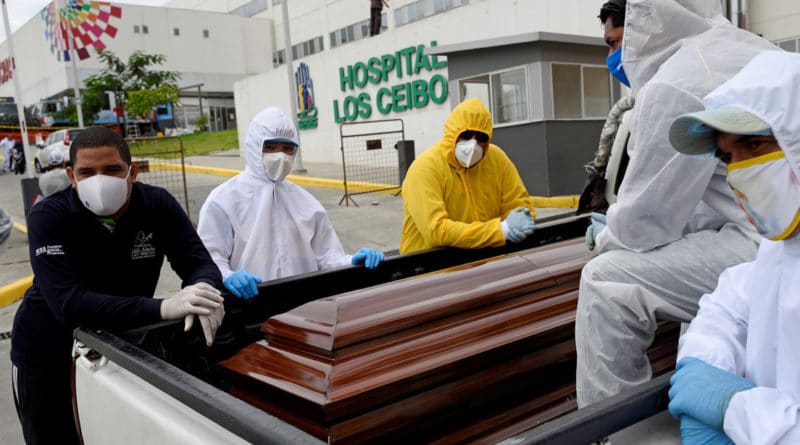 Some 6,703 people died in the first 15 days of April 2020 in Guayas, the Ecuadorian province hardest hit by the coronavirus pandemic, reported Jorge Wated, president of BanEcuador and designated leader of the Joint Task Force for the management of those deceased in Guayaquil, capital of this province. Wated stated that the average number of monthly deaths in this province is 2,000; that is, approximately 1,000 deaths in 15 days, so there was an increase of around 5,700 deaths.

According to the official, these deaths “involve different causes: Covid-19, alleged Covid-19 and natural deaths.”

“We hope that in the next few days these figures will decrease,” Wated said.

According to the Thursday, April 16 report on the status of the pandemic in Ecuador, out of 8,225 positive cases, there are 403 confirmed deaths by coronavirus in the entire country and 632 “probable deaths”, that is to say, 1,035 fatalities by Covid-19.

To date, in Guayas, according to these official figures, only 187 people have died from coronavirus.

700 corpses to bury
Wated also reported that the Joint Task Force that he directs, which is focused on Guayaquil, still has the burial of almost 700 dead pending. “We hope to bury them between this week and maximum the next one, we are doing it little by little,” he said.

Faced with the allegations of mass graves opened in Guayaquil to meet the demand of the deceased, Wated emphasized that “one-person, fully identified burials are being and will be carried out.” In addition to Guayas, Wated expressed his concern for the province of Santa Elena, also on the coast of Ecuador, where, without specifying data, he said that “the number of deaths has increased a little.”

In the midst of such shocking news, the official offered what he called “hopeful” criteria, referring to the fact that “within the 24 provinces (of the country) there is a stabilization, including a decrease in the death curve, including Guayas,” according to the data provided by the cemeteries and the Civil Registry. He added that they have observed that “the deaths in hospitals are decreasing,” which he considered “encouraging”.

Although he spoke of hundreds of deaths pending burial, he specified that “the cemeteries are conducting burials daily,” in the case of Guayaquil, this after relatives have been made to wait a lengthy time to bury their deceased, which generated a funeral crisis in the city.

This week, the mayor of Guayaquil, Cynthia Viteri, pointed out that in the city “there was and is no space for the living or the dead.” She stated that the death toll provided by the national authorities is not real. “Patients die without ever having had a test, and there is no space, time or resources to carry out subsequent examinations and to know whether or not a person died of coronavirus,” explained the mayor, noting that in March “there were 1,500 more deaths” than in the same period of 2019.