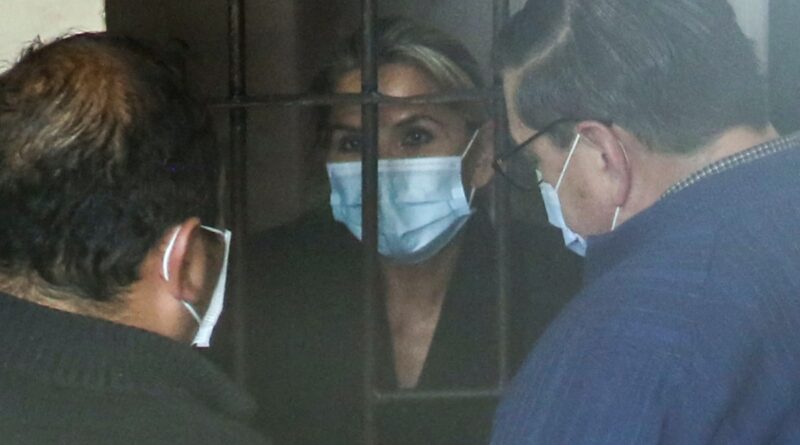 Jeanine Áñez, one of the most visible faces of the coup in Bolivia against Evo Morales in 2019, and who took charge as the de facto president of Bolivia in the guise of a constitutional succession after ousting the elected president, has been detained by order of the Bolivian prosecutor’s office.

She is charged with crimes of sedition, conspiracy and terrorism.

Among other events, Áñez is being investigated for the killing of 37 Bolivians in the towns of Senkata, Sacaba, Montero, Betanzos, Ovejuyo and El Pedregal, where police forces under her command brutally repressed the popular demonstrations against the coup.

According to a report presented by the Bolivian Ombudsman’s Office entitled “State Crisis, Violation of Human Rights in Bolivia, October-December 2019,” what happened in the Andean country were crimes against humanity.

Áñez was arrested this Saturday, March 13 at dawn, and was transferred to the office of the Special Force to Fight Crime (FELCC), in La Paz, where her statement in the case of the 2019 coup d’état will be recorded.

In regards to the demands for justice by social and human rights organizations in Bolivia in the cases of massacres directed by the de facto government of Jeanine Áñez during the last quarter of 2019 to the end of 2020, the arrest and prosecution of the political leader and her closest collaborators would be a first step to redress the impunity.

RELATED CONTENT: Paraguay: In the Midst of a Political Crisis, Social Unrest, and a Health Catastrophe

Responsible for the coup against Evo

According to the Bolivian Ombudsman’s report, the judicial measure has been adopted against Áñez, five of her former ministers and four military personnel for their responsibility in the coup. In this sense, two of her former ministers, Álvaro Coimbra and Rodrigo Guzmán, were arrested shortly after the decision of the prosecutor assigned for the events of October-November 2019 was made public. It is to be noted here that the aforementioned events led to the forced resignation of Evo as well as a series of criminal incidents carried out by the State that resulted in two massacres, 37 deaths, hundreds of wounded and thousands of detainees.

After hearing the news of the arrest of Áñez, Evo Morales applauded the action and urged the courts to continue investigating the perpetrators of the “dictatorship” that caused, in addition to a social disaster, the looting and destruction of the national economy.

It should be remembered that the illegality and illegitimacy of Jeanine Áñez’s mandate was orchestrated and supported by the Organization of American States (OAS) and the United States government. The regional body issued a baseless and evidence-free report of rigging in the elections won by Evo Morales in October 2019.

It was not until November 2020 that democracy returned to the South American nation, when Luis Arce, the candidate for Evo’s political party, Movimiento al Socialismo (MAS), assumed the presidency after winning the 2020 elections.

Featured image: Former de facto ruler of Bolivia finally in jail after her repressive regime committed human rights violations with the support of the OAS and the United States. File photo.