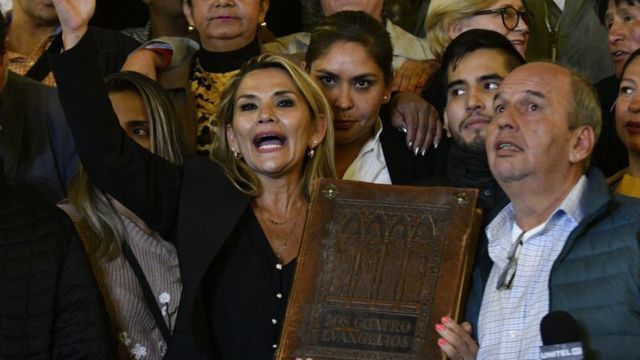 Bolivian state media reported that the Attorney General of the Plurinational State of Bolivia issued an arrest warrant this Friday, March 12, for former de facto ruler Jeanine Áñez and several of her ministers, due to their participation in the “coup d’état case” against President Evo Morales.

The judicial measure applies to Áñez, five of her former ministers and four military officers, for their direct role in the coup, according to the resolution. Two of Áñez’s former ministers, Álvaro Coimbra and Rodrigo Guzmán, were arrested shortly after the decision was reported.

Those named in the court decision were accused of committing the crimes of “terrorism, sedition, and conspiracy” in the events of October and November 2019. This included the chain of events that led to the resignation of Evo Morales and two massacres committed during the de facto regime resulting in 37 deaths, dozens of injured, and thousands detained during demonstrations.

After the decision of the Bolivian prosecutor’s office, hundreds of people gathered around the building where Añez is currently residing, in expectation of the serving of the warrant, reported TeleSur’s Freddy Morales.

Recall that the illegality and illegitimacy of Jeanine Áñez’s mandate was orchestrated and supported by the Organization of American States (OAS) let by Luis Almagro. The regional electoral monitoring organization issued a rigged report following elections won by Evo Morales in October 2019, alleging that a fraud had taken place. These OAS claims were never substantiated or proven, but had the backing of the United States government.

It was not until November 2020, when the candidate for Morales’ political party Movement for Socialism (MAS), Luis Arce, assumed the presidency following a resounding electoral victory, that democracy returned to Bolivia.