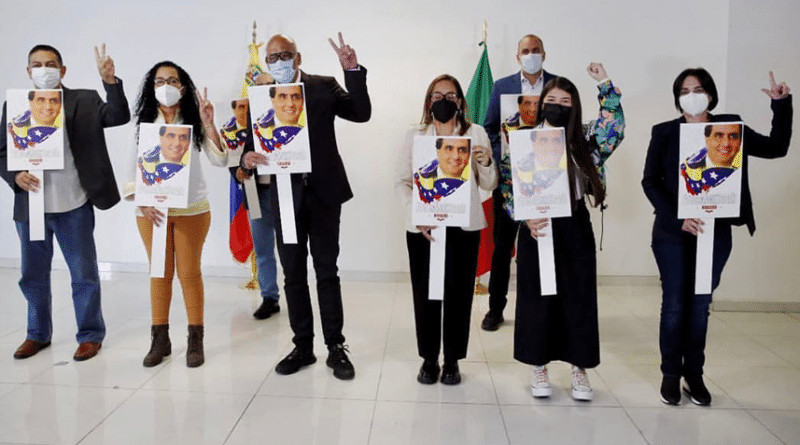 After receiving a letter from the diplomat Alex Saab, the head of the Venezuelan government delegation in the Mexico Talks, Jorge Rodríguez, expressed outrage at the atrocities committed against this representative of Venezuelan diplomacy.

In a post on his Twitter account, Rodríguez wrote: “This letter from our special envoy Alex Saab was received this morning by the members of the Venezuelan government delegation. His message moved us, and at the same time we felt deep indignation at the atrocities committed against our diplomat. Truth and life will prevail!”

In the letter, Saab denounced his subjection to torture in Cape Verde, including psychologically torment. For example, authorities had deprived him of water for days, wrote Saab, “because according to them they must pass the transparent bottles through the x-ray, and the machine is always damaged.”

Below is the full text of the letter sent by diplomat Alex Saab:

• Dear Jorge, members of the dialogue table, government officials, and opposition representatives, I send you my greeting and I hope you are all well.

• To my government and our delegation, they do not know how it has moved me to hear of the gesture towards me that you made when you arrived in Mexico.

• I can’t see photos, but I felt full of strength and pride for the country when they told me about it.

• I am and will always be eternally grateful to the entire delegation and to our government for the honor they gave me.

• That is the country that I love.

• The Patria that defends just causes.

• The Patria that seeks the welfare of the people every day.

• I was kidnapped by Trump, his henchmen, and his failed policy 473 days ago. They have physically tortured me in Cape Verde until they got tired.

• They continue to torture and provoke me psychologically each day until today.

• I have been denied medical attention among so many other basic human rights.

• Sometimes they even leave me without water for days, because according to them they have to pass the transparent bottles through x-rays and the machines are always “damaged.”

• I have been threatened with death in a US prison almost every day since I was vilely kidnapped.

• They threatened my family’s life.

• I have been slandered, reviled, mistreated and, according to them, humiliated. But the soul of a warrior does not break. Only the one who kneels sees his enemy as a giant.

• They sanctioned me in 2019—not only me but my two eldest children, who were almost minors, about to graduate from university, and who have nothing to do with this political conflict.

• My children had to interrupt their studies and go into exile, again, barely having reached adulthood.

• Their accusations against me are so ridiculous and politically motivated that they have not been able to find a single piece of evidence against me.

• Even Switzerland trashed the case of judicial overreach by investigating me for three years and NOT finding in 3,000 pages a single operation even suspected of being something illegal.

• The same has happened in other countries that have investigated me, always prompted by the disinformation networks that Elliott Abrams himself publicly confessed to using.

• However, the US in its impotence constantly threatens me, even threatening to accuse my children without good reason, if I do not give in to their demands to stop serving my country and to falsely denigrate my government.

• The US was infuriated because, among other things, food and medicine continued to arrive [in Venezuela] despite the blockade. According to them, it was a sign that they were failing in their “plan” which they disrespectfully call “regime change.”

• They literally wanted the people to rise up due to hunger.

• They even brazenly asked me via my lawyers to stop helping my country for 120 days, leaving it without food or medicine, in exchange for “amnesty.” For them [the US] 120 days of hunger would be enough. Did it imagine it would make me responsible for a genocide?

• I never gave up and I ALWAYS communicated it to my superiors.

• I lived through the death of my father and my mother during this abduction, alone, without saying goodbye to them. This was not the fault of COVID-19 but due to its tyranny.

• They separated me from my family, my wife, my five children, the youngest five months old. I still feel the last kiss I gave my baby.

• My family has been abducted for the same 473 days as me, because the abduction is experienced by the family even worse than by the one who is abducted.

• And what have they achieved in these 473 days? Nothing. Every time I have been able, the only thing I send are messages of strength to the brave Chavista people to surround [protect] our President.

Featured image: Jorge Rodríguez alongside the rest of the Venezuelan government delegation to the Mexico Talks, all holding an image of the Venezuelan diplomat Alex Saab, who was kidnapped by the Cape Verdean government following an unsubstantiated extradition request from the United States. Photo courtesy of Twitter/@jorgepsuv.