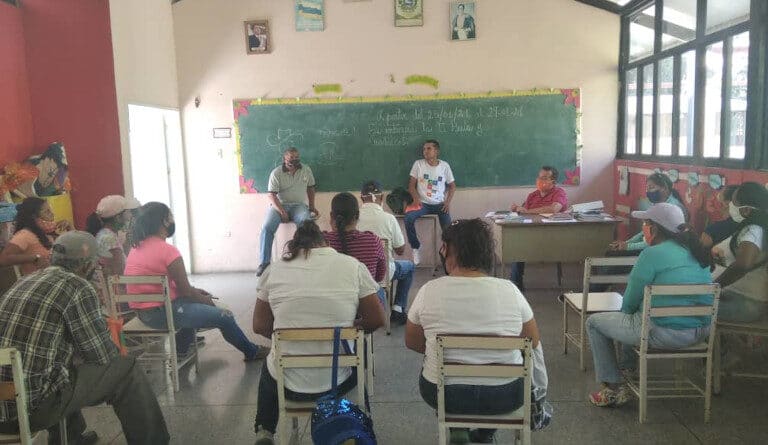 In Lara, Venezuela, the renewal of the spokespeople of communal councils continues through the Communal Offensive plan to update self-government towards the construction of communal cities, June Mejías reported, spokesperson for the National Communal Parliament of the state.

In the nine municipalities of Lara state, assemblies are being held to promote sponsorship of communal self-governance practices.

This January 20, one of these meetings was held with the socialist commune Valles del Turbio of the Concepción parish in the Iribarren municipality (Barquisimeto), as part of the plan suggested by President Nicolás Maduro, which seeks to define the organization, installation and deployment of 200 communal cities throughout the national territory. This was highlighted by María Rodríguez, custodian in the Ministry of Communes and Social Movements for Lara in the Concepción parish (Iribarren), and for the town of Jiménez (Quíbor).

Rodríguez stressed that in the aforementioned town, community movements supported the success of the plan that they began with the formation of 23 organizers put forth by the communes, in the farm school of Cuara.

It should be noted that during the three days of socialization and debate, communes were in charge of the logistics of the workshop. “From there, the success of the community movement in the Jiménez municipality began,” said Rodríguez.

In Jiménez territory there are 324 communal councils, of which 254 belong to 29 registered communes.

The plan for the Communal Cities began last Friday, January 15, in the Juan Bautista Rodríguez parish, where there are nine communes. On Monday, the 18th, Cabo José Bernardo Dorante parish was served, with four communes and 50 communal councils.

In the tourist parish of Tintorero, the activity was carried out on Tuesday, January 19, with the participation of three communes made up of 22 community councils.

Rodríguez reported that 80 percent of the Community Councils have been renewed. She then announced that it was time to begin to renew self-government in the communes and that “only the four communes that go to Ciudad Comunal have been updated in this period,” and that, during the course of this year, four additional communes will be promoted in Jiménez.

Featured image: Meetings are carried out in the 9 municipalities of Lara. Photo courtesy of Ultimas Noticias.