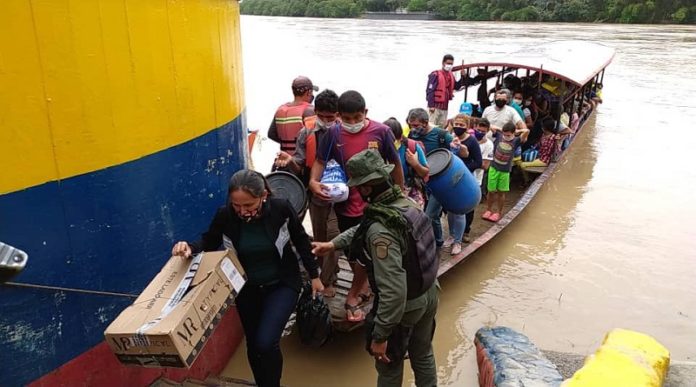 Inhabitants of El Ripial town in Apure state, who were displaced due to clashes between the Venezuelan military and Colombian paramilitary gangs over the last few days, are returning home with support from the Bolivarian National Armed Force (FANB) deployment protecting the border zones. El Ripial is one of the localities from which the Venezuelan military has expelled Colombian armed narco-paramilitary gangs. This follows violent actions committed by the said criminal groups, reported from multiple locations close to the Colombia-Venezuela border in Apure.

Last week, facing violence from the Colombian narco-terrorists, many families of El Ripial left their homes and fled to the other side of the border that lies between the Rómulo Gallegos municipality (Venezuela) and the department of Arauca (Colombia). Now, as normality is being restored to the region, the displaced families are returning to their homes. Inhabitants of another Apure locality, La Victoria, who were also displaced by the violent clashes that began on March 21, are also returning home.

The latest official report of the FANB confirmed the death of at least nine terrorists in the clashes. Apart from that, 32 more are under arrest and remain at the order of competent penal authorities. Lamentably, four members of the Venezuelan military were also killed in the operations.

FANB deployment remains stationed
Units of the Bolivarian National Armed Force (FANB) remain stationed in the border regions, and are continuing their search and tracking operations. The aim is to expel the last of the Colombian paramilitaries from the Venezuelan frontier zones and consolidate peace for the communities of border towns like La Victoria and El Ripial.

Materiel and explosives related to criminal activities were reportedly found in some houses in these localities. According to Venezuelan officials, this proves that the narco-traffickers had infiltrated the civilian population, who were forced by blackmail and extortion to accommodate the criminals.

With each passing day, more evidence is being uncovered regarding how the terrorist groups were working in El Ripial, inside Venezuelan territory. This included manufacturing land mines that they implanted in residential areas of the town and especially in the agricultural zones where most of the people living in these regions work.

At present, the people of La Victoria and El Ripial are under protection of the Venezuelan military. FANB spokespersons have reported that the towns are now totally ready to receive the residents who have not yet returned to their homes.