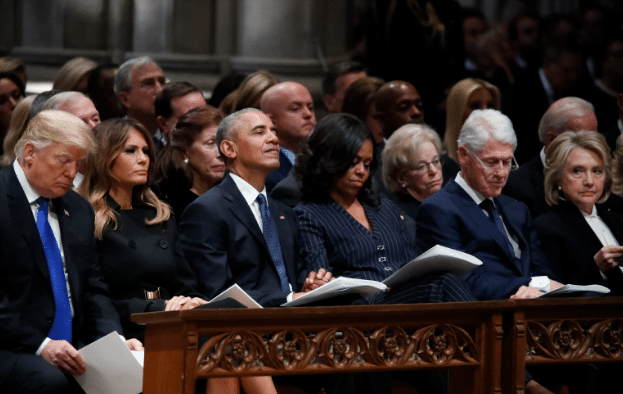 As someone from Pennsylvania, I think the overwhelming emphasis on cultural explanations for  the rise of Trump is just more evidence of an out of touch liberal-cosmopolitan elite who simply  can’t wrap their minds around why the peons and plebs would vote for anyone besides the  oligarchic HRC, not to say that Trump is not also an oligarch. Some commentators even went as far as saying that Trump’s victory was a white cultural backlash to eight years of a Black presidency. To  unpack this question we have to ask ourselves: was the Obama presidency more Black and thus  any different from the presidencies of Bush or Clinton? Police impunity of murder continued, the  supremacy of Wall Street was continued, wages continued to fall, bankruptcies from the inability  to pay for medical care continued, unionization did not see a comeback, homelessness remained the same or grew. My answer would be that no, there was no electoral backlash simply because  the Obama presidency was not different enough to elicit such a response.

RELATED CONTENT: Social Democrats are Fooling Themselves: We Can’t Vote our way out of Neoliberalism

When Obama was  elected, much of the population truly felt that change was coming, a new social contract that  would finally include the downtrodden, the workers, the poor. States that used to be industrial  centers, which have lost a lot because of neoliberalism and predatory globalization, voted for  Obama, as well as swing states. States like Michigan, Pennsylvania, Wisconsin, Indiana, Florida, and Iowa all went for Obama in the 2008 election, no doubt they voted for “change” even if  Obama offered none. A May 2017 analysis by Global Strategy Group estimated that Obama Trump voters accounted for more than two-thirds of Hillary Clinton’s loss.

I whole-heartedly  concur with Cristina Kirchner’s analysis of the situation; “In the United States, someone who represents the crisis of political representation as a result of the implementation of neoliberal  policies won. What the people of the United States are looking for is someone who breaks with  the economic establishment, the only thing it has caused is poverty, loss of work, loss of their homes, “said Cristina. She also went on to say that it is foolish to chalk the entire win by Trump up to racism, because many of the same people who voted for Trump, voted for Obama. I completely agree; I think it is very convenient for the ruling class and their pundits to simply call so many of these people nothing more than racist bigots, but the true causes and effects are indeed more complicated and also an indictment of the capitalist and neoliberal system.

When  people see their jobs, their livelihoods, their incomes, their homes, and the safety of their  families disappear, they tend to vote for someone who will give them the answers as to why this happened.  While Clinton called many of these people deplorable and made no effort to reach out to non-lifetime Democrat voters, Trump gave answers to their questions: he blamed immigrants, Muslims, Mexico, and many others who had nothing to do with the suffering being felt by tens of millions of people in the United States. Trump’s analysis of the situation was 90 percent incorrect, and 10 percent correct. He said he wanted to make the Republican party a “workers party”, he said he  wanted to end wasteful and deadly wars, said he wanted to stop free trade deals which have  overwhelmingly negatively affected workers in all countries. He saw that there was animosity with the establishment status quo, while Clinton in her infinite arrogance convinced herself that  everything was fine, that the plebeian voters wouldn’t dare touch her ruling class-bestowed neoliberal crown. He appealed to that anger, telling the people lies, while there was no left that sought to redirect this anger at the people who deserve it: the bankers, warmongers, and career politicians who are in the pockets of capital, robber barons, cartels, and arrogant cosmopolitan liberals who condemned all who couldn’t name all 1,241,422,453 sexualities to the camp of bigoted deplorables who deserve all the ill effects of capitalism, neoliberalism, and imperialism.

No doubt there are terrible racist people in this country, no doubt that no matter who is president, the system itself is inherently racist to its core and continues its proliferation on the backs of all  who aren’t wealthy and even more so those who aren’t white. Obama was as much the head of a white supremacist nation as Trump is. Millions of people who lost their jobs, have seen loved ones lost to the opioid epidemic, and have seen their life expectancy fall in the wealthiest country on earth voted for change, voted to show that they were fed up with the status quo, the ruling elites. This is based on economic logic, evermore so because it is impossible to separate the economic from the political. To this day many people are absolutely stunned that Clinton lost, but their shock reveals more of their ignorance and arrogance.