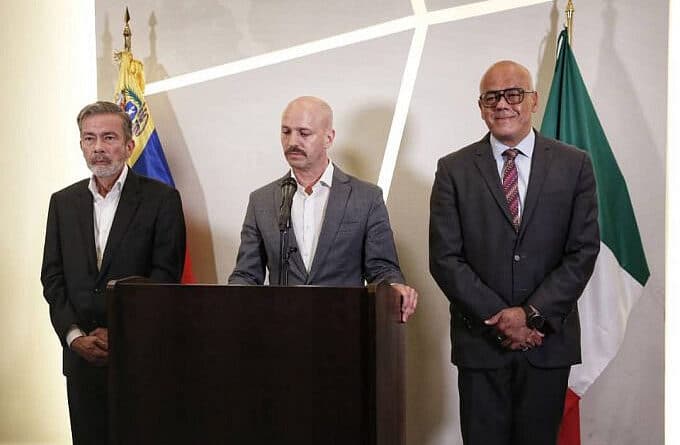 Both the Venezuelan government and opposition delegations jointly condemned the xenophobic acts perpetrated against Venezuelan migrants in Chile this weekend. This was announced on Monday, September 27, by Dag Nylander, spokesperson of the facilitator team of the Kingdom of Norway, at the end of the third phase of the Venezuelan dialogue held in Mexico City. Both delegations expressed their absolute condemnation for the acts of xenophobia and violence against Venezuelan families that occurred this Saturday in the Chilean city of Iquique, denouncing the acts as a very serious violation of human rights. The delegations also deplored the hate campaigns against Venezuelans in many countries.

Nylander also reported that the delegations held joint meetings where consensus positions were adopted in search for solutions to the social, economic and political challenges in Venezuela. Moreover, both delegations agreed on the need to include a focus on gender in the negotiations, and also in the agreements that have been reached or those that may be signed in future.

The involved dialogue parties worked on the creation of consultation mechanisms that could be applied to the diverse political and social actors that are influential in Venezuela.

The delegations hence agreed to immediately hold several consultation sessions with various national and international political and social actors, so that an efficient consultation and participation mechanism could be established as soon as possible.

The final joint statement presented by the two delegations also expressed gratitude for the mediation provided by the Kingdom of Norway and the support of the Kingdom of Netherlands, the Russian Federation, and the host country, Mexico.

A translation of the joint statement is presented below:

Joint Statement No. 3
The Dialogue and Negotiation Table on Venezuela, installed in accordance with the Memorandum of Understanding signed on August 13, 2021, met in Mexico City, Mexico, from September 25 to 27, 2021.

The involved parties met and began by discussing important points on the agreed agenda. The various working groups also held joint meetings where consensus positions were approached in search for solutions to social, economic and political challenges.

The delegations agreed on the need to ensure a gender approach in the development of further dialogues and negotiations, as well as in the agreements reached.

Finally, the delegations are grateful for the facilitation provided by the Kingdom of Norway and the support of the Kingdom of Netherlands, the Russian Federation and the host country, Mexico.