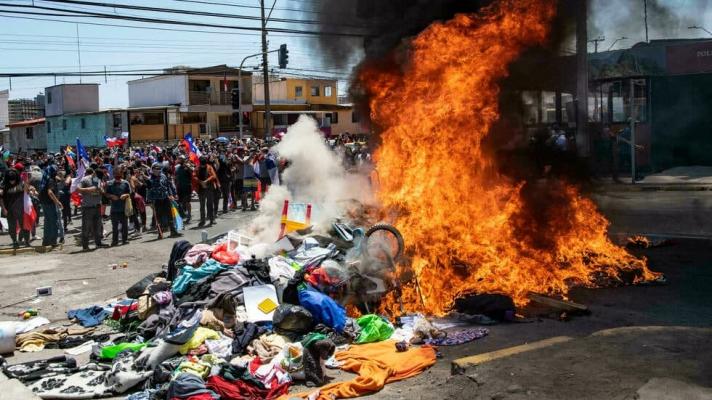 Police forces of Chile’s Sebastian Piñera evicted around 150 families of undocumented Venezuelan immigrants from makeshift camps in the city of Iquique in northern Chile. The next day a crowd of at least 3,000 people joined the eviction with posters and xenophobic insults, while the most radical elements burned the belongings of these Venezuelans migrants in vulnerable conditions.

The Chilean Interior Minister, Rodrigo Delgado, expressed his rejection of the violence of the protest, but assured that the Chilean government will continue “with the evictions in all the public spaces that are required” and also “with the expulsion plan” of undocumented immigrants.

For its part, the Chilean Prosecutor’s Office announced on Sunday that it will open an investigation into the attack.

Through her Twitter account, Prosecutor Jócelyn Pacheco of the city of Iquique reported that she had ordered the investigation of the events “that ended with the burning of the belongings of migrant families.” She added that protection measures were put in place for the affected Venezuelans, who after the attacks were forced to flee and hide in the streets and beaches of the city, according to the testimony of an AFP journalist.

The government of Venezuela, through a statement by Vice President Delcy Rodríguez, rejected the attacks, and demanded that the Chilean authorities respect the physical and psychological integrity of the victims of xenophobia.

Rodríguez reported that President Nicolás Maduro ordered the activation of the Vuelta a la Patria plan so that the Venezuelans attacked in Chile could return to Venezuela on flights provided for free by the Venezuelan government.

Featured image: People burn tents, clothes and other belongings of Venezuelan migrants during an anti-immigration march, in Iquique, Chile, on September 25, 2021 (Photo: EFE).