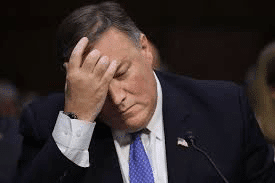 The US will withdraw all remaining diplomatic staff from Venezuela this week, US Secretary of State Mike Pompeo posted Monday night on his twitter account.

The U.S. will withdraw all remaining personnel from @usembassyve this week. This decision reflects the deteriorating situation in #Venezuela as well as the conclusion that the presence of U.S. diplomatic staff at the embassy has become a constraint on U.S. policy.

RELATED CONTENT: Venezuelan FM Blasts US for ‘Celebrating’ Amid Power Outage in Venezuela

It is worth remembering that President Maduro broke relations with the US government after they recognized in a synchronized operation with Juan Guaido the self-proclamation circus performed by the Venezuelan deputy in a square in Caracas.

Later the US government requested the opening of an interest office according to the Viena Convention and a deadline of 30 days was granted by Maduro’s government for the remaining very reduced US staff in Caracas. That deadline was extended again a couple of weeks back for a few additional days.

RELATED CONTENT: Elliott Abrams Lied Again to the US Congress

Elliot Abrams during his last hearing at the US Congress affirmed that the US was not having conversations with the Venezuelan government in relation to the opening of an Office of Interest, but latter that day President Maduro reported meetings held by Chancellor Arreaza and Abrams in New York in relation to this issue.

Chavistas in Venezuela will celebrate this day as a national holiday, a political analyst said to OT. “This is also clear evidence of the erratic US foreign policy under Pompeo’s direction and also shows the political defeat that Maduro’s government is imposing on the Trumps administration”, he said.