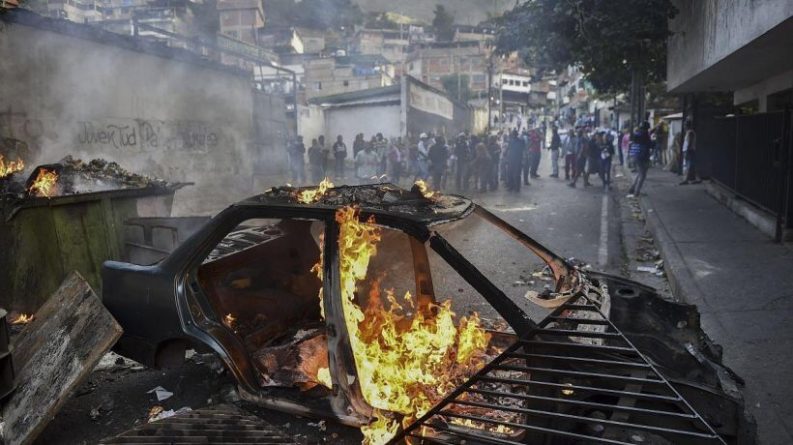 At 9:18 am on Monday, January 21, the president of the National Assembly in contempt (AN), Juan Guaidó, said from his account in twitter that the events in the command of the Guard Bolivarian National (GNB) of Cotiza, Caracas, are “a sample of the generalized feeling that prevails within the FAN (sic), our military know that the chain of command is broken by the usurpation of the presidential office, so the AN commits to provide all the necessary guarantees to the military that contribute to the restitution of the Constitution.”

He referred to the supposed Amnesty Law issued by the National Assembly so that Venezuelan State officials would not recognize President Nicolás Maduro, and they would comply with his call to recognize as the country’s highest authority the Venezuelan parliament, considered in contempt by the Supreme Court of Venezuela (TSJ).

The incident referred by Guaidó started a few hours before (2:50 am) when a small group of soldiers assigned to the Area Command number 43 of the GNB, broke into the post of Police Coordination Macarao in Caracas, then moved to the Security Urban Detachment of the GNB located in Petare, managing to subtract part of the arsenal of arms there, to finish in the northwest of Caracas, where they ended up surrendered and captured in the headquarters of the Special Unit of Security Waraira Repano, in Cotiza, Libertador municipality, also attached to the GNB. Two attacks, a call and a delivery

Timed to be the first news on Monday, this group of soldiers of the GNB issued four videos on social networks, where they declared “be united to restore the constitutional order as requested by the people of Venezuela”, in allusion to the calls to militarily revolt carried out by the board of directors of the AN, antichavista parties, the Lima Group and senior officials of the government of the United States as Secretary of State, Mike Pompeo, and the director of the National Security Council, John Bolton. The histrionic display of the uniformed that speaks before the cameras, shows the intention of projecting an image similar to that of the dejected on January 15 of the year 2018, Óscar Pérez, who in his short but scandalous course tried to create the script in which a group of soldiers with supposed superior capabilities put the Maduro government in jeopardy. Covered in this maneuver, packed for internal and external consumption, Guaidó, together with media such as La Patilla and NTN24, tried to show it as an example of what happens inside the Bolivarian National Armed Forces (FANB).

Fallen the group in disgrace, the traditional operators of the narrative of chaos, proceeded to lengthen the news agenda by posting videos on social networks of “demonstrations in favor of the military”, emulating what they did after the failed assault on Fort Paramacay, in Carabobo, in the year 2017. A repetition of the same spectacular logic that strives to establish a direct link between uprising, armed actions and the supposed popular support that this kind of events lack.

Diosdado Cabello, president of the National Constituent Assembly (ANC), pointed out that the rebels were immediately at the mercy of the State, after their promoters did not comply with the agreement. And that we “did not have to regret the loss of any life, fortunately.” He also said that the phones seized from the bandits reveal that they received calls from abroad hours before the moment of the operation.

The dimension of the events

Who acts as “leader” is the sergeant Alexander Brandes Figueroa, who near dawn said he was locked in Cotiza squadron from where he asked for the uprising of other detachments and the “people of Venezuela.” The language with which he refers to his comrades in arms is not at all innocent, he describes them as “warriors”, terminology identical to the one used by the terrorist group led by Óscar Pérez in the violent events of the year 2017.

Both the message of the videos and their ultra mediatized diffusion in social networks by “influencing” accounts of antichavismo, reflect that beyond the international effect, premeditated, the search focuses on creating a climate of opinion that invites more military bodies to revolt, and the resuscitation of civilian opposition sectors to take to the streets on January 23, who since 2017 are immersed in an atmosphere of apathy, frustration and anger against their leaders for the failure of their latest regime change plots.

Seen from a dispassionate angle, the result of an operation that could well be described as amateur, happened amid the pressure initiated by the AN in contempt and its calls for military rebellion, supported by the statements of the Lima Group and supported by the releases issued by Pompeo, Bolton and company. The result has been an effective maneuver that had as protagonists about 27 low-ranking soldiers who acted as lone wolves moving from one side to another without strategy, or plan, rather than publish some videos on social networks. The comparison is worth noting that when the regime change operations began in Libya and Syria, the military that rose up against Muhamar al-Qadhafi and Bashar al-Assad were high-ranking commanders of important troops who quickly joined the irregular armed groups to go against the two state powers. While in Venezuela, a few days before a similar call, the result of this uprising is the assault on two lightweight security headquarters in the outskirts of the city, and the subsequent surrender of the insurgents after a few hours.

NOTES ABOUT THE DAYS TO COME AND THE LIMITS OF REALITY

It is no secret to anyone that senior officials of the US government took the decision to start an irregular conflict in Venezuela a long time ago, after supporting the irruption of the cell led by Óscar Pérez. And for no one is it a secret that they are now trying to use the AN as a battering ram in contempt to enable the same course, the same path, that leads to a violent exit, either through a conflict or a military coup. The decision is taken, and there is not even an attempt to hide the intentions as they did in the past.

On January 23 will seek to be, again, the spark that ignites a meadow to try to fracture the high civic-military directory of the Bolivarian Revolution, parallel to a possible escalation of the conflict in the international arena.

However, the rapid dismantling of Pérez’s armed cell, like the fleeting uprising described here, demonstrates the limits of this transnational logic of exercising power, which often, when it tries to transfer its intentions to Venezuelan territory, collides with a reality objective that is elusive, and at the same time, alien to their plans.

This signaling, on the other hand, does not hide the current danger, nor minimizes the threat that looms against Venezuela, especially considering that in this type of process, like the one that pretends to initiate antichavism, a large part of the heavy moves downstream and surges of surprise to aggrandize, in appearance, the size of the strength of those who oppose the Venezuelan government.

In each attack, however, they hurt, and a lot, but it is one thing to say that they are going to start a war and quite another to start it.