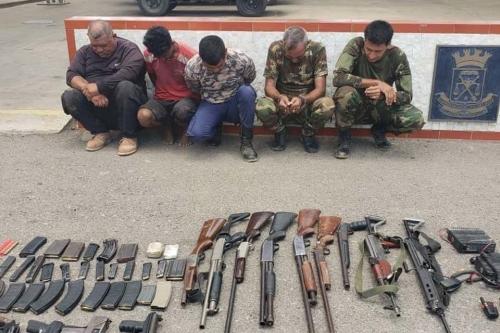 San Juan, May 13, 2020 (NCM) – The disjointed Operation Gideon to overthrow the government of Venezuela, has left loose ends in several Caribbean countries, such as Curaçao, Trinidad-Tobago and Puerto Rico, while US naval reinforcements arrive and a call to action from a (Venezuelan) politician who has been linked to Israel’s MOSSAD was made.

These loose ends of the aborted operation tend to complicate the situation for the United States and for the Netherlands, France and England, which also have Caribbean colonies and have mobilized warships in the area.

In addition, they are configuring a story that recalls past piracy, which begins with the unfortunate arrival of an adventurous soldier on an island, but not on the legendary Bird Island in the 17th century, but on Puerto Rico in 2017.

Washington’s attempt to disassociate itself from what has happened is less effective every day, both because of the confessions – one after another – of participants in the operation, and because of the events that continue to occur. In a story, as is already evident, that is still being written with new revelations and actions in a rather disjointed way.

The recent flight of the RC-135 reconnaissance aircraft along the Venezuelan maritime border is the type of espionage action that is usually carried out in secret.

Likewise, the Fourth Fleet, which since has announced its entry into action in April, had managed to keep a low profile and its ships seemed to avoid the social radars of the Caribbean islands, finally made its appearance with the entry on the scene of the USS Kansas City. A day after the new warship was located between the Cayman Islands and Jamaica, reports circulated on the networks from Venezuela that it was already more than one hundred kilometers south of that second island and that it was preceded by the USS Detroit and others, two ships whose identification managed to be kept in reserve.

If having seen the fleet entering the Caribbean had not been enough, the Venezuelan opposition politician Antonio Ledezma appeared on the scene, convicted in 2015 by Operation Jericho, in which he was allegedly linked to an agent of the MOSSAD from Israel. Beyond the coincidence of Jericho and Gideon as names in that country’s military history, reports began to circulate that the camps in Colombia where the mercenaries were trained had been precisely related to MOSSAD.

Ledezma, who had kept his distance in the first days after the failed landing, yesterday, as soon as the advance of the US naval squad was known, chose to make a call from his electronic account. He said that “it is urgent to intervene with a force capable of defeating the mafias that usurp powers in Venezuela.”

The tendency to disarticulation seems to be an unwritten norm in the vast theater of operations.

The HNLMS ship Karel Doorman, of the Navy of the Kingdom of the Netherlands, which had crossed with the FS Dixmude on April 24 – presumably in Caribbean waters – encountered the Dutch coast guard Jaguar near the island of Curaçao. The photograph of the meeting was released on May 3, just one day before the boats from Colombia attempted to disembark a short distance down the north coast of Venezuela.

In a photograph, the gates of the lifeboats of the Karel Doorman appear raised, as if it was ready to throw them into the sea.

RELATED CONTENT: Colombian Government Admitted its Involvement in Failed Mercenary Operation in Venezuela – Investigating Leakers and Not the Criminals

Several days later, Curaçao’s influential Chronicle newspaper issued a harsh editorial stating that “we have no confidence” that the Netherlands has shipped its largest warship with attack helicopters, tons of war equipment, soldiers and Marines. to help combat COVID-19. In its editorial, the Chronicle stated that a war would be disastrous and called for “Peace between the Netherlands and Venezuela.”

It is not the first time that Curaçao has hindered military movements in its metropolis. In 2019, it reluctantly accepted Holland’s demand to establish a warehouse for supplies for Venezuela, but it refused to allow them to leave as long as there was no agreement on it with Caracas.

Meanwhile, the US issued a statement in which it threatened Trinidad-Tobago that it “reserves the authority” to impose a punishment on its government for a shipment of fuel that supposedly left that nation, arrived on the Dutch island of Aruba, and from there would have been transferred to Venezuela. The situation appears to have caused a political storm.

Complications and misfortunes continue to accumulate every day, such as the Colombian Navy artillery boats that appeared empty and adrift on the Orinoco River, as well as the video of the confession of the deserter captain of the Bolivarian National Guard Antonio José Segura, who commanded one of the boats that attempted the landing on the fourth of May. Captain Segura said that Operation Gideon strategist, mercenary and former sergeant of the US special forces known as green berets, Jordan Goudreau, had shown them his access to the White House by forwarding the announcement to be made about the shipment of a naval force to the Caribbean.

Like so many mercenary adventurers with weapons, Goudreau had obtained, after retiring from the Army, a private guard job in Puerto Rico shortly after Hurricane Maria and was photographed in camouflage with a tent on top of a mountain, He himself recounted how he heard the news of a Florida school massacre and decided to resign and start a company in that state to propose that the parents of students pay him monthly to infiltrate veteran special forces on their campuses.

He did not get a single client and today the Silvercorp building is a dilapidated and abandoned structure. But from there, Goudreau got a contract with Juan Guaido: Operation Gideon.