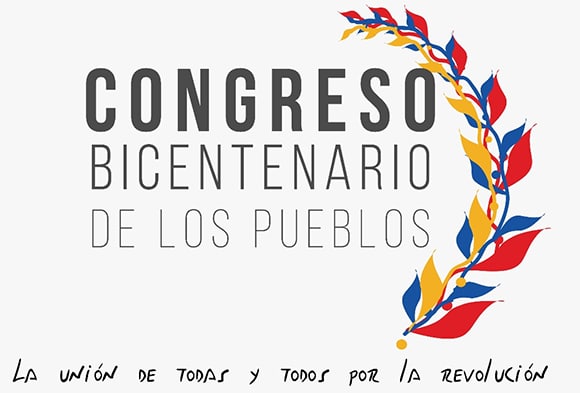 During the last two weeks, a set of preparatory meetings for the Bicentennial Congress of the Peoples of the World were held, an instance convened by fellow president Nicolás Maduro in the framework of the commemoration of the 200 years of the Battle of Carabobo, in the coming month of June.

It is undoubtedly an important international event, which will take place in a year that, as we have pointed out earlier in this column, is loaded with deep symbolism for Bolivarian women and men, who today are firmly facing enormous challenges in defense of the dignity, sovereignty and independence of our country. It is taking place in the midst of a complex situation, characterized by the intensification of the criminal political-diplomatic, economic-financial-commercial and communicational onslaught of imperialism against Venezuela.

We know that this is a consequence of the defeat inflicted by the heroic people of Simón Bolívar and Hugo Chávez to each of the attempts that, throughout these years, have been launched to try to end the project of broad transformations begun by the historical leader of the Bolivarian Revolution in 1999, upon assuming the Presidency of the Republic for the first time.

This is now combined with the great challenges that the terrible COVID-19 pandemic brings to humanity, which, among other things, has exposed the unviability of the capitalist system, with its marked exclusionary and unequal nature.

The lead in these preparatory meetings has been under the responsibility of the Congress organizing committee members, an instance that I am honored to coordinate and is marked by an intense work schedule. The first stage will culminate tomorrow, with an encounter between those who are part of the international promoter committees, formed during the development of said meetings and the Venezuelan Head of State.

During these days, we have been able to interact with personalities and representatives of political, parliamentary, indigenous, peasant, working class, youth, student, and women’s organizations, as well as communicators from around the world, including members of the Afro-descendant movement, for housing and sex-diversity, among other instances of popular power.

With all these companerxs we have shared our reflections on the current national and international situation, and the importance of the invitation that is made to Venezuela to a congress that, in addition to promoting an ever greater understanding of the truth of Venezuela, based on the analysis carried out by each of the invited organizations in relation to the challenges facing our country today, is also proposing to contribute to the strengthening of networking instances of these organizations, under the Bolivarian conception of the “balance of the universe.” This is a conception that reinforced Commander Hugo Chávez’s unwavering determination to build a multi-centered and pluripolar world. To the same end, it sets out to achieve a change in the correlation of forces, that would make possible a new model of relationships between all actors of the planet, based on respect for the most elementary principles of international law, including the sovereignty of nations and the self-determination of peoples.

These issues will continue to be debated in the second stage defined for the development of the Congress, which will take place between the months of April and May of this year, in order to reach the great world meeting in June with the necessary elements to approve a strategic agenda joint action.

It is clear, at the end of this first round of sectoral preparatory meetings for the Bicentennial Congress of the Peoples of the World, that the homeland of Bolívar and Chávez is not alone, and that, despite the intensity of the anti-Bolivarian campaign deployed by US imperialism, with the complicity of global mainstream media, the truth of Venezuela makes its way thanks to the strong will of the Venezuelan men and women to be fully free and to defeat whatever plan is designed and implemented by the United States and its lackey governments. Representatives of these governments have assumed such cynical behavior that they amaze their own citizens, who witness with astonishment the impudence of their authorities. While blocking the Venezuelan economy and appropriating Venezuela’s resources in their eagerness to try to suffocate it to “give up due to hunger,” they shout that it requires “humanitarian aid.”

Thus, despite all the inconveniences that the criminal economic, financial and commercial blockade imposed on the nation brings, Venezuela in 2021 continues to resist and advance, imbued with a deep Bolivarian feeling and following the course set by Commander Hugo Chávez towards a more robust democracy every day. Our people will embrace greater tasks of government, and at each level of public power, it strengthens participation and popular leadership.

Carabobo summons us again and the Venezuelan people are ready, as they were on June 24, 1821, to relive this heroic feat, of which we are celebrating the bicentennial this year. We also celebrate the popular victory of April 13, 2002 over the opposition coup and the epic of May 2020, in the small fishing port of Chuao.

We Venezuelans will continue to demonstrate our warrior lineage and the libertarian blood that runs through our veins. We will to each imperialist aggression with the strengthening of our civic-military unity and the ratification of the commitment to defend, under any circumstances, the legacy of the historical leader of the Bolivarian Revolution. It is a task for the achievement of which we count on the unwavering solidarity of the peoples of the world who, gathered in the Bicentennial Congress, will promote common agendas of struggle from which to continue advancing in our efforts to build a better world for everyone, a more humane and supportive world.

They have not been able and will not be able to defeat us, because united, the peoples of the world will always win!