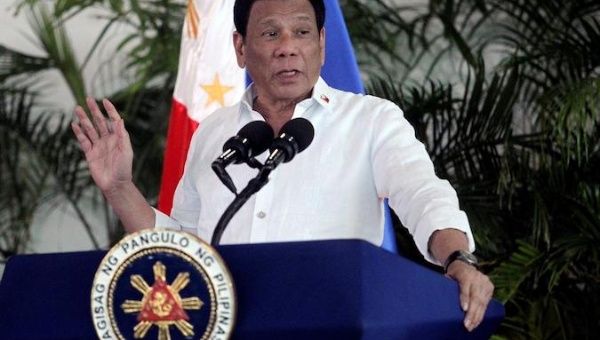 The government and the Communists’ political wing have been in on-again, off-again negotiations since 1986. Previous agreements have fallen apart when the government re-arrested rebels who served as consultants in the talks.

The president of the Philippines has expressed willingness to reopen the peace process with the Communist Party – declared illegal in the country – and its armed wing, the New People’s Army guerrillas, after disbanding his negotiating team in March.

Rodrigo Duterte announced that he will send the government’s chief negotiator, Labor Secretary Silvestre Bello, to speak with Communist Party Founder Joma Sison, who has been living in self-imposed exile in the Netherlands for three decades along with other party leaders.

“This is the first time that I will reveal it, I’m sending Secretary Bello… He should go there, talk to them,” Duterte said overnight at a briefing in Bicol region, the transcript of which was released to the media Friday.

Duterte came to power in 2016 with a campaign promise to reopen talks with the Communists and pushed for negotiations in Oslo. They even agreed on a ceasefire but the process was halted in June 2018.

But the government’s representative then decided to temporarily suspend the meetings to review all the agreements signed by the previous governments, a decision that then pushed the Communists to refuse to take part in any peace process with the Duterte administration.

After months of escalating armed confrontation, Duterte announced in March a definitive end of the peace process with the Communists and disbanded the negotiating team headed by Bello.

“Three times we attempted to talk sense dito (to them) and it has always failed…I cannot stop. Hindi ko sabihin na ayaw ko makipag-usap (‘I cannot say I do not want to talk’), that is not a statement of a leader, of a president,” Duterte said, in the common code-switching between Tagalog and English (known as “Taglish”) often employed by many public officials in Manila.

He added that this was his last opportunity as “my time is running out” in engaging with the National Democratic Front, a coalition of leftist parties, including the Communist Party, negotiating with the government on behalf of the insurgency.

In addition to urging the army to destroy the NPA – Asia’s oldest Communist guerrillas – by 2019, Duterte has begun a legal process to declare it a terrorist group, like the United States and the European Union have already done.