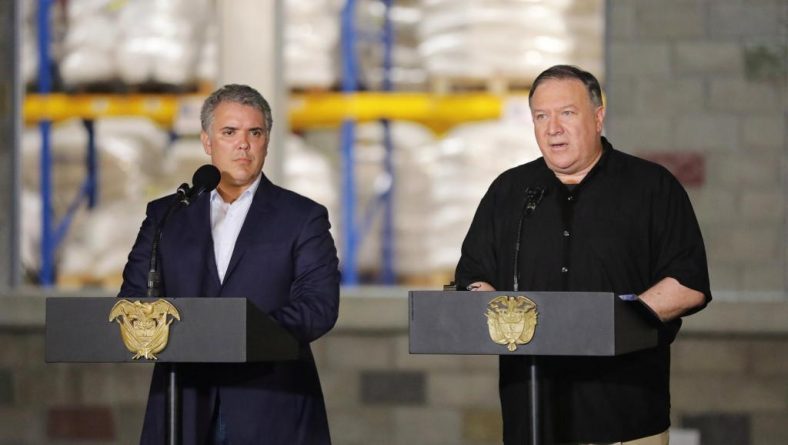 The Latin American tour of the head of US diplomacy Mike Pompeo focuses on seeking support to intensify diplomatic and economic pressure on the Venezuelan government and accelerate an exit from power of Nicolás Maduro.

This Sunday, at the close of his tour of Chile, Paraguay and Peru, Secretary of State Mike Pompeo stopped a few hours in Cucuta, Colombia, to meet with President Ivan Duque and visit the border area between Colombia and Venezuela.

The head of US diplomacy launched a new discharge of criticism and threats against the government of Nicolás Maduro, and asked him to reopen the border with Colombia so that Venezuelans can receive medical and food assistance, but without ceasing in his warning to the Chavista leader to “end the usurpation” and leave power.

“Mr. Maduro: open these bridges, open these borders, you can finish this today,” Pompeo said in a statement to the press, accompanied by Duque. Maduro ordered the closure and blockade of the four bridges that connect Venezuela with Cúcuta on February 22, on the eve of a frustrated operation by the opposition to receive aid donated by the United States.

“Maduro must know that we are watching and our support will not waver, the democratic actors in Venezuela will not be dissuaded,” said Pompeo. Venezuelan Foreign Minister Jorge Arreaza reacted on Twitter to the Secretary of State’s statements:

Pompeo also highlighted the commitment of Washington and its South American allies to attend to the migratory phenomenon generated by the crisis in Venezuela: “The United States has provided more than 213 million dollars in humanitarian assistance since last Friday and Vice President Pence announced approximately 60 millions in additional help,” he said. But he forgot to mention that only in 2019 the US government have seized Venezuelan assets for more than 20 billion dollars.

RELATED CONTENT: Back to the US: IMF Directors Do Not Recognize Juan Guaido

On Monday, the Lima Group, an alliance of 13 Latin American countries plus Canada, meets in Santiago to follow up on the Venezuelan crisis.

A conciliatory message towards Colombia

Mike Pompeo tried on the other hand to appease the criticism launched by President Donald Trump against Duque’s allied government for not having “done anything” to reduce the shipment of drugs to the United States since his arrival in power in August.

“The United States will continue working with you to end the problem of coca production that you inherited, we know what we must do and the United States will do its part to reduce the demand for illegal drugs,” said Pompeo, while Duque defended his actions. government against drug trafficking and emphasized shared responsibility.

In Chile, Pompeo discussed details of the APEC conference in November in Santiago. In Paraguay, he spoke with Paraguayan President Mario Abdo Benítez on how to fight transnational crime. And in Lima, Pompeo praised the anti-drug campaign and welcomed Venezuelan migrants.