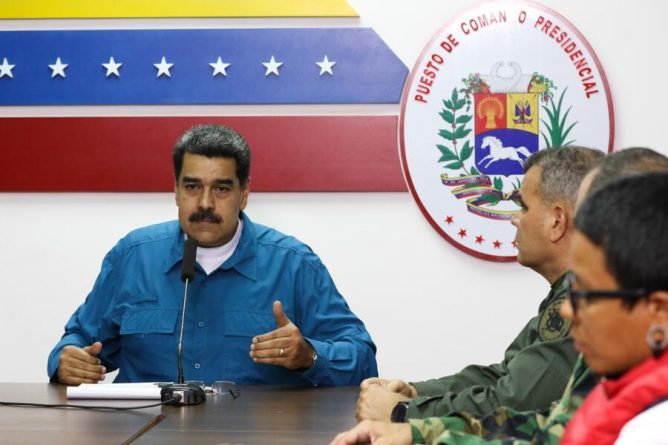 Venezuelan President Nicolás Maduro reported on Sunday night on the national radio and television network that the electricity service will be restored gradually, for which he approved “a 30-day plan for electricity administration regime (rationing)”, for the entire generation process, the secure and insured transmission processes, and the service and consumption processes throughout the country, with a fundamental emphasis on guaranteeing water service to our people “. In addition, he asked the population, social movements and popular organizations to fight to preserve peace and not allow violent demonstrations, known as “guarimbas”, which can lead to chaos. “It’s a battle where we must persevere!” he emphasized.

From the Presidential Command Post at the Miraflores Palace in Caracas, the Venezuelan President explained that “we have been managing a very serious situation, because the blow went directly to the generation system, and affected the generation capacity from the Guri to the rest of the country. We have managed to restore the service, in some places faster than others. We have achieved this in the east of the country, in the south, in Greater Caracas, in Miranda, in Vargas, in Aragua, Carabobo, Yaracuy, and we have arrived intermittently at the tail of the electric system, in Zulia, Falcón, Los Andes, doing technological and technical miracles”.

He thanked the efforts of the workers of Corpoelec, of the ministers, of the Vice President of the Republic Delcy Rodríguez, “who is there in Guyana personally.” He also thanked the Bolivarian National Armed Forces for “protecting and accompanying this process”.

He recalled that the water pumping service depends on electricity, and when it is sabotaged, the arrival of water to the communities is also affected. He asked his government team to improve the plan to bring water to the people, and called on the private operators that have trucks to join, to support.

Against the guarimbas
Maduro ordered the security processes to attune themselves around the electric system, which is in the sights of “some monsters that want to destroy Venezuela”, in clear reference to the Venezuelan extremist opposition, and “try to take it to violence, as they try in some places with small groups, to create guarimbas and death “.

The Head of State called on the people of Venezuela to defend peace in every sector of the country, this in the face of the attempts to create pockets of violence, which occurred this Sunday in some points of the city, such as “Fuerzas Armadas” Avenue, Cotiza and some sectors of Catia “They are not going to take away our peace! We are going to replenish and rebuild the electrical system from these imperialist attacks, but we can not let go of peace!” he emphasized.

Maduro instructed the social movements, the collectives, the peace crews and the UbCh’s to go, together with the militiamen, “to defend the peace of each neighborhood and each block. It will not be the criminals, the violent ones, the murderers, the ones who take the lead against the people to do more harm to them! ”

Back to work with part-time
He reiterated the decision to work a reduced shift beginning Monday, until 2 in the afternoon. “We have to go to work!”, he emphasized. Public transport must be guaranteed throughout the country. “The pace of work must be maintained for everyone.” He is thinking about restoring the educational activities on Tuesday or Wednesday, so that “the country can continue its daily life”.

Damage to the electrical system
President Maduro recalled that since March 7 attacks on the National Electric System began, and so began operations to free the computer system and “restore the service as we did,” with specialists, engineers, scientists and hackers “that allowed us to freeing the brain of the national electrical system, which was penetrated with viruses and hacked from the north, from Houston and Chicago, as we explained and we showed it. ”

He also reiterated that electromagnetic attacks continued on the transmission lines, which completely cross the country. “We were replenishing the service, we were freeing from electromagnetic attacks and also from physical attacks, from fires ignited that are facilitated by the hard summer we are having, hot and very dry. We have seen whole lines here, in Caracas. We saw how they sabotage the mountain, the Waraira Repano, and they constructed with flammable liquids a route to try, on several occasions, to create very powerful fires around the transmission towers there and create a disturbance”.

Maduro said: when they had recovered the service, on 25 March, “we received the main fiercest attack, brutal, violent, an attack with bullets to the transformer equipment, transmission equipment of our power plant essential to the country: El Guri. They exploded during the night of Monday, March 25!” There began a new stage, explained Maduro.

He explained that several government spokesmen from  Donald Trump had announced that “we would be without electricity”, but “we did not know or believe it would be such a criminal and so murderous, to attack directly and cause the explosion and the almost total destruction of that equipment.”

“Brutal attacks” on Friday and Saturday
“On Friday (March 29) at 7:28 pm, we suffered a brutal attack on the transmission lines, an attack that is being evaluated for its damage capacity.” He indicated that the attacks combined two elements:

Maduro explained that what happened on Friday was a “hard blow” that took almost 3 hours of diagnosis, recovery and replacement.

On Saturday, when the east and center of the country had been energized and the rest of Venezuela was stabilized, a brutal electromagnetic blow was received almost at 7 o’clock at night. “These are the blows of an electric war, to drive the country and the people crazy. And we will not allow it! ”