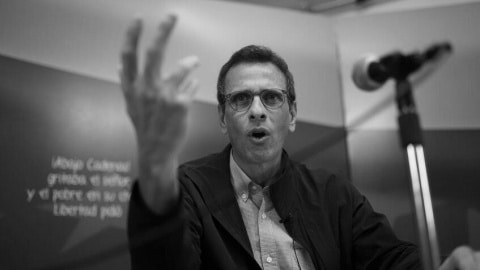 Addressing the expectations regarding the scheduled negotiation process to be held in Mexico in the next few days, the leader of Primero Justicia, Henrique Capriles Radonski, stressed that he is committed to this new stage of dialogue as well as the electoral schedule for November 21.

In an address before local media, he affirmed that his party will be present at the meetings that he assured will begin this Friday, August 13, in Mexico.

In addition, Capriles effectively vindicated the role of the Venezuelan National Electoral Council (CNE) as he defended without hesitation the CNE rectors Enrique Márquez and Roberto Picón, whom he defined as two persons committed to the struggles that the national opposition has led in recent years.

“I hope we can all align ourselves on the basis of a route to resolve the disagreement that we have had,” expressed Capriles. “I believe that the elections cannot be missed, because they are an opportunity for organization, mobilization and expression to regain strength,” he explained, supporting the process of dialogue and elections.
With these words, he stressed that, although he is not a candidate for the regional elections, he will tour the country to support the local and regional leaderships of the opposition. He confirmed that he will vote in the November 21 elections, and called for massive participation. “Grab the bull by the horns, don’t be so indecisive,” he advised right-wing candidates.

What other sectors of the opposition say
On the subject of the dialogue, the opposition coalition called Alianza Democrática maintains its conviction about the indispensable nature of the meeting and the understanding for “the institutional, political and economic rescue of our country.”

This was expressed by that sector of the Venezuelan right in a recent statement. In the text, they have ratified their willingness to continue with the mechanisms of political conversations with the Bolivarian government. However, they claim that they have not received invitation to the sessions planned in Mexico.

“Our development of political dialogue is not temporary, but constant,” said Alianza Democrática in its statement. “We practice it daily, with the conviction that, despite our profound differences and approaches, we can find common grounds that will allow us to advance in meeting the needs of our people.”

Moreover, this sector of the Venezuelan opposition stated that important results have been achieved in the different stages of rapprochement and negotiation. They even referenced to the procedure that led to the appointment of a new National Electoral Council (CNE) for carrying out the parliamentary elections of last December.

RELATED CONTENT: Confirmed: Venezuelan Government and Opposition to Sit Down for Talks in Mexico

Criticisms and conditions
However, Alianza Democrática pointed out that only “a tiny sector of the opposition that has a phobia of elections and calls for abstention was invited to the upcoming dialogue in Mexico.” The secretary general of Accion Democrática, Bernabé Gutiérrez, posted this on social media.

Meanwhile, another spokesperson for the opposition coalition, Timoteo Zambrano, asserted that the countries that will be present at the talks among the Venezuelan political sectors must support the regional elections scheduled for November 21 as a gesture of goodwill for the benefit of democracy.

He also reiterated that the alliance maintains its position in favor of promoting dialogue as a way to establish agreements. “We await the definitive cessation of shortcuts and magical exits promoted by radical sectors,” he added. “Venezuela needs serious proposals.”

In recent days, it has been publicized by the media and social media that leaders such as Gerardo Blyde, Tomás Guanipa, Carlos Vecchio, Mariela Magallanes, Stalin González and Luis Emilio Rondón will be present in Mexico, representing the Venezuelan extreme right. The representation of the Bolivarian government will be headed by Jorge Rodríguez, president of the National Assembly, and Héctor Rodríguez, governor of Miranda state.