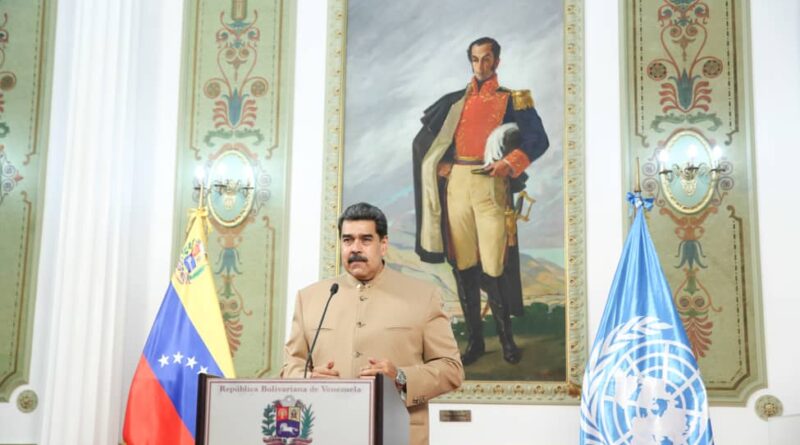 75 years after its foundation, the United Nations has the challenge of building a multipolar world where full respect for international law is imposed to face the imposition of a hegemonic world, stressed the Venezuelan President, Nicolás Maduro, during his speech in the High Level Meeting to commemorate the 75th Anniversary of the UN.

“75 years later, today we are faced with a challenge: either we build a multipolar world where we all exist, we are respected, a world of balance, with full respect for the United Nations system and international law, or a hegemonic world, dominated by a single hegemon, a unipolar world, that is the contradiction of the historical epoch. The multipolar world versus the unipolar world, the world in its diversity, in its peace, in its cooperation, versus the world of the hegemon, of imperialism,” he said.

He reiterated that Venezuela advocates a multipolar world and “for a renewed United Nations system, for a United Nations system that enforces international law, that protects the peoples of the world.” In this regard, he mentioned the Covid-19 pandemic that affects the world and that has threatened “the social and economic life, the life of our peoples; this pandemic requires the greatest unity of humanity.”

“We want to ratify, in this special session for 75 years, all the support for the World Health Organization, as an expression of multilateralism, in a fundamental area of the life of the peoples that is health, especially in this time of pandemic in which the World Health Organization has had to endure attacks, aggressions, insults. It is not time to insult or offend the WHO, it is time to unite to support it, that is the cry from Venezuela. Venezuela cries out for a new world,” said the Venezuelan president.

Elections
President Maduro also referred to the parliamentary elections on December 6 and reiterated the invitation to the UN to send a technical delegation.

“We have invited the Secretary General of the United Nations to send a technical commission to accompany the election process for a new Parliament, a new National Assembly on Sunday, December 6. Venezuela is open to the world, democratic Venezuela, free Venezuela, sovereign Venezuela,” he stated.