This Wednesday, June 1, within the framework of the Communal Homeland Plan, Venezuela’s President Nicolás Maduro and various ministers visited the Altos de Lídice Socialist Commune in Caracas, where they held discussions regarding the productive development of Venezuela’s communes. The head of state took a tour of the socio-productive areas of the community and met with cooperative members, entrepreneurs, and community producers.

“I want to be more and more connected with the reality of the neighborhood, with the reality of the people,” President Maduro said. “For that, I created the 1×10 System of Good Government, for that I am promoting the communes more than ever. Commune or nothing!”  He encouraged the ministers who accompanied him on the tour to respond directly to the needs of the commune in matters of health, education, drinking water, housing, and telecommunications.

President Maduro once again highlighted the potential of the 1×10 System of Good Governance, and programs connected to it such as the map of solutions, the specific action agenda, and Line 58 of VenApp—which allows citizens to register complaints about public utilities—as strategic tools to help solve citizens’ problems.

President Maduro urged the construction of a coordinated civic-military system involving government entities and the electorate to connect the 1×10 System with the priorities of the people. “If there is no neighborhood, social organization, and People’s Power, it is impossible to address the problems and gradually solve them,” said the head of state. “There must be popular self-government, government of the territory.” 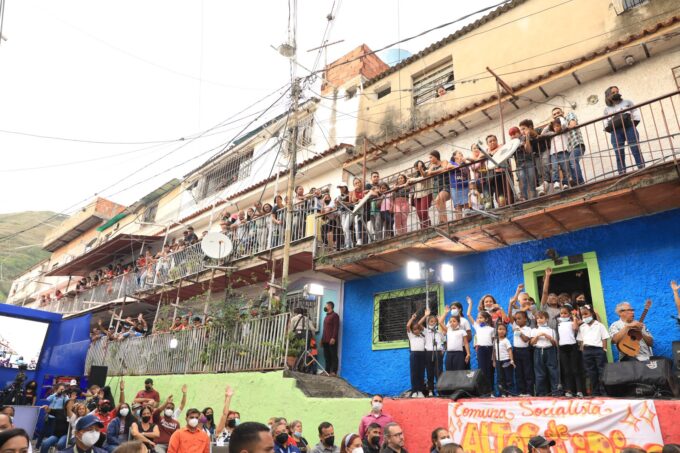 “One of our main missions is to build the people’s power, to enrich it with political, organizational, legal, ideological, educational, and financial tools so that we can sow the new system of popular government,” said the national president.

As part of the announcements made to encourage the implementation of the 1X10 System of Good Government, President Maduro reported that a CANTV command post will be established in Miraflores Palace to receive and respond to the telecommunications needs of the people.

New automated registration process for Community Councils
Alongside the Minister for Communes and Social Movements Jorge Arreaza, the head of state announced the opening of a new automated online registration system for the country’s Communal Councils.

The president explained that this process is part of the 3R.NETS program, for the democratization and renewal of the councils, with the aim of creating communal cities throughout the country.

He recalled that self-government by the people is the “greatest dream of Commander Chávez” for socialist Venezuela.