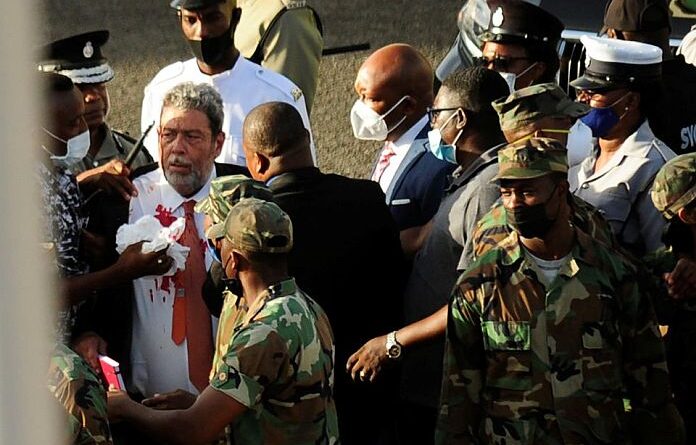 The Prime Minister of Saint Vincent and the Grenadines, Ralph Gonsalves, who was injured on Thursday during protests, will be transferred to the neighboring island of Barbados to receive medical attention.

“I want to inform the public that based on the analysis and advice of the medical professionals at Milton Cato Memorial Hospital, a decision has been made that the Prime Minister needs to be transferred to Barbados for an MRI as a result of his injuries,” said the Minister of Finance Camillo Gonsalves.

The head of state was heading to the Parliament headquarters this Thursday when he was hit with a stone while passing through a demonstration that was taking place outside the enclosure. Demonstrators were protesting against new measures put in place to combat COVID-19.

Where is the statement condemning this abhorrent act?

Camilo Gonsalves, who is the son of the prime minister, stated that “this is not a scratch. This was an attack” against the head of government.

Previously, the Prime Minister’s Secretary, Schon Marshall, indicated that Ralph Gonsalves was transferred to the Milton Cato Memorial Hospital in Kingstown (the capital), where he was treated by medical personnel.

According to the information, other members of the Executive and those accompanying them were also subjected to attacks. Water bottles and stones were thrown at them.

In a press release, the Office of the Prime Minister stated that “About 200 demonstrators, responding to a call to action from the Leader of the Opposition, picketed the Parliament and blocked the entrance to the building… An Opposition demonstrator then hurled a projectile at the Prime Minister, which struck him in the head, inches above the temple… The use of violence in pursuit of political purposes is entirely unacceptable”:

The protesters were expressing their dissatisfaction with the modification of the Public Health Law to mandate coronavirus vaccinations for certain sectors that work in the first line of medical care.

So far, Saint Vincent and the Grenadines has registered almost 2,300 infections and 12 deaths from COVID-19, in a nation that has a population of 110,940.

Later on Thursday the Saint Vincent and the Grenadines Police arrested the person allegedly responsible for the assault and attempted murder of the country’s Prime Minister. The assault has been condemned by regional organizations and representatives of local political forces, reported Telesur.

“They have arrested a woman, there might be more arrests,” said Francis. “She wanted to apologize to the prime minister. I told her no, that she is not going to go in front of my political leader. To do what? Because they locked you up, you want to apologize.”