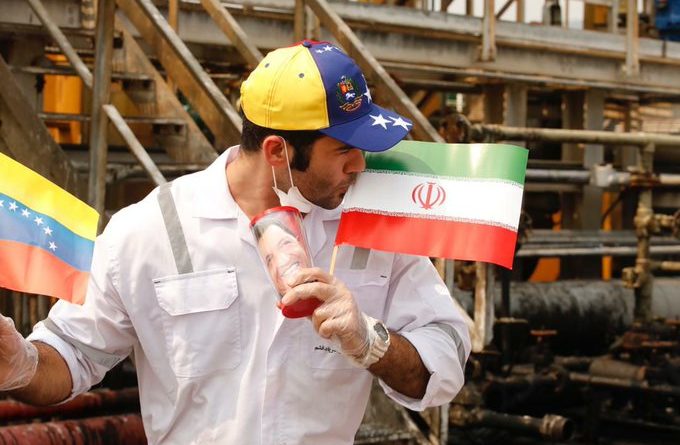 The arrival of the Iranian tanker Fortune to the great refinery of El Palito in Venezuela has a meaning far, far greater than the quantity of gasoline and other crucial supplies transported in this ship. There are other aspects that are much more important. I would like to point out three.

First, this has successfully defied the U.S. blockade that impedes the arrival of all sorts of products – from food and medicine to the repair parts for the metro trains of Caracas to fuel – to the Bolivarian Republic of Venezuela, blockaded and under attack. This represents a major triumph for the government of Nicolás Maduro and a resounding defeat for the White House. This is all the more true when we consider that the ships of the Fourth Fleet have been patrolling the Caribbean for a couple of months now, and could easily have intercepted this ship, which they did not do.

Second, that it has been precisely the Islamic Republic of Iran that succeeded in overcoming Washington’s prohibition. This is another country that has been subject to the White House’s cruel sanctions, and even to the U.S. assassination of one of the principal figures of the Iranian government, General Qasem Soleimani, carried out early this year. The international media, bought accomplices of the United States and accustomed to covering up its crimes, which has boldly ignored the slow assassination of Julian Assange in London, barely noted this and showed no tendency to reveal and analyze it.

Third, it remains to be seen what will happen with the other four tankers that are en route. It is obvious that the Trump Administration has reversed its initial stance and its threats have remained just threats, typical bragging like a mob-boss personality who regards himself as the messiah, called to utilize his hoodlum techniques to restore the now-lost U.S. supremacy which it has held from the date of the fall of the Soviet Union until the attacks of September 11, 2001. A sociopath who has been responsible for 100,000 deaths of his own people due to the mixture of arrogance and ignorance he has so clearly demonstrated, as he plays out his re-election strategies while confronted with the COVID-19 pandemic which in less than 6 months has produced an economic depression worse than that of the 1930s.

But it is obvious that we have not reached the end of this history. We will have to see what happens with the other four tankers. It seems unlikely that Trump, battered by serious domestic problems, would order that they be stopped, attacked or sunk because these are serious acts of war loaded with unforeseeable consequences that would damage still more his waning chances of being re-elected next November 3rd. The most reliable electoral surveys show him 5 or 6 points behind a candidate as uninspiring as Joe Biden, and everything indicates that this gap will increase to the same degree as the deterioration of the internal situation of the United States. For another thing, Trump’s menaces were resoundingly responded to by Tehran. President Hassan Rouhani warned Washington that his country would not remain indifferent if any “problems” occurred on the way to Venezuela. In an unusually strong declaration, he said, “If the United States creates problems for us in the waters of the Caribbean or anywhere in the world, we will reciprocate and create problems for them. We have a legitimate right to defend our territorial integrity and our national interests, and we hope the United States does not make a mistake.”

It is evident that the government of the U.S. is continuing to reap failures in its foreign policy. The arrival of the Fortune is one more proof, and there are others. Trump did not mince words in insulting North Korean leader Kim Jong-un in 2017, and two years later he ended up crossing half the world in order to meet with him in the Demilitarized Zone that separates the two Koreas.

What was this change due to?

Noam Chomsky has said this hundreds of times: the United States only attacks defenseless countries. North Korea is not only not defenseless, but has also developed a nuclear arsenal that even under U.S. aggression retains a retaliatory capability of reducing major cities to ashes, including Seoul, just 195 km away, and Tokyo, at a distance of 1,291 km. Venezuela, Cuba, and Iran do not fall into the category of defenselessness and for that reason they have been able to resist decades of diplomatic pressure, economic sanctions, blockades, and despicable campaigns of demonization undertaken by “self-righteous intellectuals” of the type of Vargas-Llosa and the hundreds of publicists for the empire embedded in the major mass media, the so-called ( miscalled) “free press” of our continent. When the then-President of France Nicolas Sarkozy convinced Muammar Gaddafi that it made no sense to renovate his previously powerful air force since Libya and the West were now “friends,” he signed his death warrant. He accepted the advice of the French leader and of the Mafia chief head of Italy, Silvio Berlusconi, and when Washington mobilized NATO to blockade Libyan air space in 2011, Gaddafi was at the mercy of his rivals who overthrew him and not only captured him but also lynched him with savage brutality, as well as killing his three sons. Gaddafi had disarmed; Venezuela, Cuba and Iran have not done so and for that reason alone, they remain free countries, although they have had to pay an exorbitant price for their daring self-respect, which has unleashed all the fury of the empire.

Not only have they not disarmed, but, learning from the history of all revolutions, they have created powerful people’s militias – in the case of Venezuela this includes all of four million members – whose mere mention sends cold chills down the backs of the U.S. warmongers when they remember the tremendous defeat that the Viet Cong handed them during the Vietnam War. The definitive conclusion of this analysis will have to wait a few days until we see what happens with the other four tankers. One of these, the Forest, is already in Venezuelan waters. We will return to this theme as soon as this episode ends.

Featured image: Iranian sailor with a Venezuelan flag hat, holding a Venezuelan and Iranian flag and also holding a mug with Hugo Chavez face on it. Photo taken from @camilatelesur on twitter.