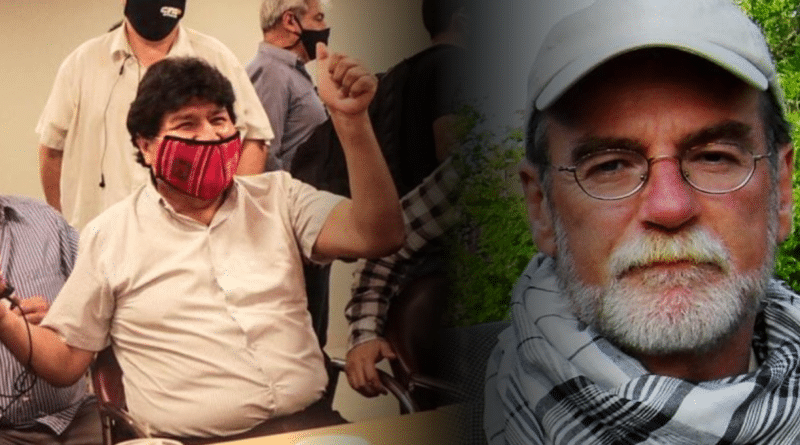 What’s most egregious about Glavin’s Bolivia writing isn’t that he’s wrong, as usual, but that he seems to care little about the consequences

Yesterday, for the first time in a long time, I woke up to some good news.

The exit polls from Bolivia’s presidential election are in, and the results are inspiring: the current leader of Evo Morales’ Movimiento al Socialismo (MAS) party, Luis Arce, won in the first round with more than 52 per cent of the vote. This means that if the official results are respected, Jeanine Áñez Chavez — who led the far-right, anti-Indigenous interim government that took power through a coup — will step down, and socialism will return to Bolivia.

Now is the time to hold people in Canada who supported the coup to account. At the top of this list are Chrystia Freeland and Justin Trudeau, but I’m confident leftist outlets such as Ricochet, Canadian Dimensions and the Canada Files will do a great job eviscerating them. As such, I want to focus instead on someone in the Canadian media.

Newspaper columnists have a platform that allows them to help shape how Canadians understand issues. As such, it’s dangerous that Canadian columnists have a nasty record of supporting devastating regime change operations, coups and military ventures in the Global South, — such as in Iraq, Afghanistan and Libya — helping to drum up popular approval for doomed ventures. What makes matters worse is that they often move on without admitting their errors when the nations in question are destroyed, escaping without any consequences.

This absolute disregard for the lives of people in the Global South, and the lack of media standards when it comes to commenting on matters pertaining to them, is one of the most frustrating aspects of the corporate press. What makes it worse is that many media watchdogs who can do great work elsewhere don’t even bother to try holding them to account. It’s just taken as the natural order of things, unworthy of serious criticism.

And that’s why I’m writing about Canada’s preeminent media regime change cheerleader, Terry Glavin, and his work on Bolivia during the leadup to the coup and in its immediate aftermath.

Glavin is a Postmedia columnist, and is also frequently published in Maclean’s. In his writing on Syria, China, Venezuela and other countries, he effectively takes the Canadian government’s line but presents it as coming what he considers to be the left.

At 65, Glavin has had decades to perfect his craft, but they’ve been mostly squandered — his writing has not gotten better, just more predictable. As such, it’s no surprise that his comment history on Bolivia has followed old patterns.

Here’s a quick look at some of the claims about Bolivia he madein a few articles as well as on Twitter, and how they’ve held up. Let’s just say this should be a hard week for Glavin.

The Election Was Rigged

Glavin, and other commentators seemingly eager to see Morales out of power, based his views on Bolivia on the idea that the 2019 elections were rigged. There’s no proof he didn’t genuinely believe this to be the case. Regardless, it’s a convenient way to launder something less savoury: cheering on a leader being taken out by any means necessary, regardless of how they’re viewed by their people.

To back his claims, Glavin pointed to a report from the Organization of American States (OAS) that held, contrary to Bolivia’s election board, that the election was illegitimate because Morales’ lead over the next candidate increased from 7.87 percentage points to more than 10 after the final 16 per cent of votes were counted the morning after the election.

The report from the OAS, which has close ties to the U.S. government, has been refuted on numerous occasions.

In early November 2019, just a couple weeks after the election, the Center for Economic and Policy Research released a reportfinding that, “Statistical analysis of election returns and tally sheets from Bolivia’s October 20 elections shows no evidence that irregularities or fraud affected the official result that gave President Evo Morales a first-round victory.”

This February, Massachusetts Institute of Technology researchers put out their own report. Writing in the Washington Post about their findings, John Curiel and Jack R. Williams state, “The media has largely reported the allegations of fraud as fact. And many commentators have justified the coup as a response to electoral fraud by MAS-IPSP. However, as specialists in election integrity, we find that the statistical evidence does not support the claim of fraud in Bolivia’s October election.”

In June, the New York Times reported on an independent study from three U.S. scholars looking at the OAS reports on the election. Describing the study, one of these scholars told the Times, “We took a hard look at the O.A.S.’s statistical evidence and found problems with their methods. Once we correct those problems, the O.A.S.’s results go away, leaving no statistical evidence of fraud.”

All of this is to say that it was apparent at the time that the election was fair, and research since — including from the sort of institutions Western regime change cheerleaders are more likely to trust — has only bolstered this fact.

It’s clear that the 2019 election was fair and free of fraud, and consequently that Morales was legitimately elected. With that in mind, here is what happened after:

What more would it take to classify something as a coup?

Morales’ Ouster Was What The ‘Bolivian People’ Wanted

Glavin portrayed the coup as a popular uprising that represented the will of the “Bolivian people.” There certainly was a segment of Bolivian society that did long to see the end of Morales — one that just so happens to be supported by the West, and is overwhelmingly, though not exclusively, wealthy, Christian and white.

However, as the initial election results show, this segment was not the majority. This was further evidenced by the mass protests that took place during the coup in support of Morales. Moreover, the most recent election results are a resounding show of support for Morales’ party, indicating that the only people that denied the “agency and the humanity and the complexity of the Bolivian people” were regime change hacks like Glavin, who seem to believe taking their reactionary government’s line on Global South states make them qualified to asses who is “genuinely progressive, indeed radical.”

With this in mind, supporting an anti-Indigenous coup government instead of its opposition would be “at the very least borderline racist.”

What’s most egregious about Glavin’s record on Bolivia is not that he’s wrong, as that’s often the case, but how little he seems to care about the consequences, based on his subsequent writing, or lack thereof.

Prior to the 2019 election and the following coup, I could only find one authored tweet from Glavin mentioning Bolivia, which is from 2016 and refers to Morales as “among the scum of the earth.” I also searched the Canadian Newsstream database and other publications for articles from Glavin mentioning Bolivia, and found just one, from August 2016.

From late October to November 2019 we got the articles and tweets I quote from above. But in the months since then, when the central claims Glavin made about Bolivia were proven wrong, close to nothing.

Of the published articles from Glavin I reviewed, Bolivia was mentioned just once in an August 2020 Maclean’s piece — after all the studies proving the OAS wrong — where he demonized Morales again.

As of writing this article, Glavin’s last authored tweet mentioning the word “Bolivia” or “Morales” was sent on Nov. 24, 2019. The only acknowledgement of Sunday’s election on his Twitter was a retweet of someone claiming the coup wasn’t a coup because it wasn’t successful at the polls.

I doubt Glavin will admit he was wrong about Bolivia. But I hope that we don’t forget, and will remind him of it so that he doesn’t either. More importantly, just keep this in mind the next time you see him ranting about how he “stands with the people” of whatever leftist Global South government is under attack.