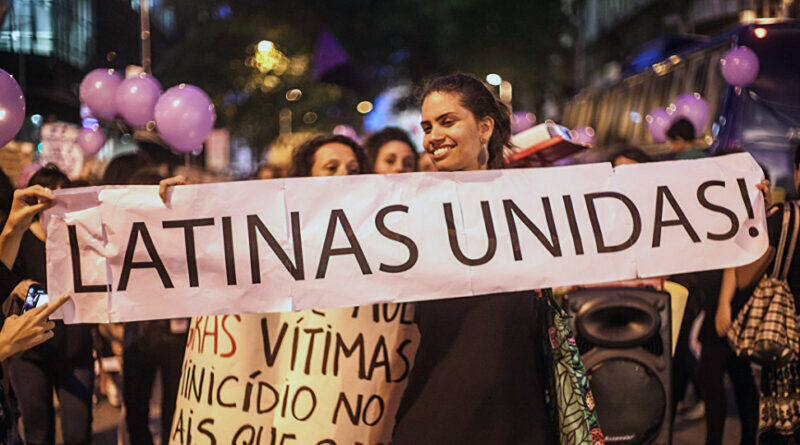 The time has come to raise the voice for Cuban and Venezuelan women, because the economic blockade and the restrictive measures that the United States is carrying out against these sisters is a particularly aggressive form of gender violence, fundamentally affecting the most vulnerable populations, and therefore women, girls, young women, adults, workers of yesterday, today, tomorrow, at home, in the factory, in the countryside and intellectuals; all of them.

Social roles are built up over centuries, and progress is made on them, but they do not change quickly, and it has been 62 years of revolution in Cuba and 62 years that Cuban women have been a revolution in the revolution, as Fidel said. But it has also been 62 years of blockade and external obstacles to development, causing a multiplicity of daily problems that they themselves will illustrate in interviews for a research project currently underway.

RELATED CONTENT: Venezuelan Women are the Hardest hit by the Blockade: Overburdened, Exploited and Carrying the Emotional Cost

In Venezuela, its women who are also an example of resilience, with almost 7 years of imperial blockade and billions of dollars locked up in more than 40 international banks. They are the backbone of the Bolivarian revolution.

Let the women speak!
In Havana last year, before the pandemic broke out, we talked to Barbara (53 years old), and when asked if the economic blockade mainly affected women, she told us:

B- Clearly, because today there are many women at the head of the household, and we have to take care every day to provide a varied diet. Every day a woman has to fight for her children to go to school and have a snack. Every day she has to go to work and suffer the shortage of transportation due to the lack of fuel. All this is violating your life because of a policy that intends to encircle us, to drown us.

It is not incompetence, it is that there are no resources. It takes a lot of work to obtain things. There are many homes where the father is not there, or is not there all the time, but the mother is.

Julieta (40 years old) was listening and waiting her turn. She immediately enters into the conversation:

J- I agree with what Barbara said, but I want to add another topic. Something as simple and common as the monthly need for sanitary pads. During the special period there were none, we had to use cloths and wash them. It is a problem of hygiene, of comfort, of privacy. Now there is a shortage of toilet paper. These are two very simple examples; another example could be the different footwear for men and women. I used to say that I could see the blockage because of the shoes, I had the ones I was given and sometimes they were too tight. In short, three simple examples, not counting the issue of children, home, work.

In Caracas, they have also resisted for years. There we found a peculiar movement called “Cocineras de la Patria Fernanda Bolaños”. Fernanda Bolaños was Bolivar’s cook. These women are in the schools, they cook in the schools, their work is fundamental. Erika was their spokesperson and she tells us that the blockade hit them hard, but as good revolutionaries and Venezuelans, they knew how to move forward.

E- There are many women here who are mothers and it hit us hard, but we are looking for alternatives, especially in terms of food, and here we are with our President Nicolás Maduro and ready to continue advancing in the revolution.

Then Gisela, from the organization “Humanized Childbirth”, denounced that there is a shortage of basic elements for pregnant women and infants. She said that vitamins, food, and medicines are often lacking. They organized themselves to protect pregnant women and infants in these circumstances from the communities, and they have taken vitamins “even from the most natural”, she says. We see day by day how the blockade affects women so severely.

We met again with María, a humble woman who, years ago in another visit to Bolivar’s lands, showed us that this revolution was serious with that phrase “Homeland, Socialism or Death”. She said that the U.S. government believes that the blockade is against “our” president, but it is the people who suffer. We conclude this part with her words, which are more than eloquent.

Around the world on dates close to March 26, different activities were carried out, also in Uruguay (caravans, activity in networks, dissemination and various denunciations), on this occasion focused on the demand for the immediate lifting of the blockade of Cuba, at the same time that almost 2000 Latin Americans and people of the world met with Nicolás Maduro within the framework of the Peoples’ Congress to be held in June of this year.

The blockade is a crime against humanity. From here we salute all these popular initiatives, and we join our voice of solidarity to the many voices from around the world.