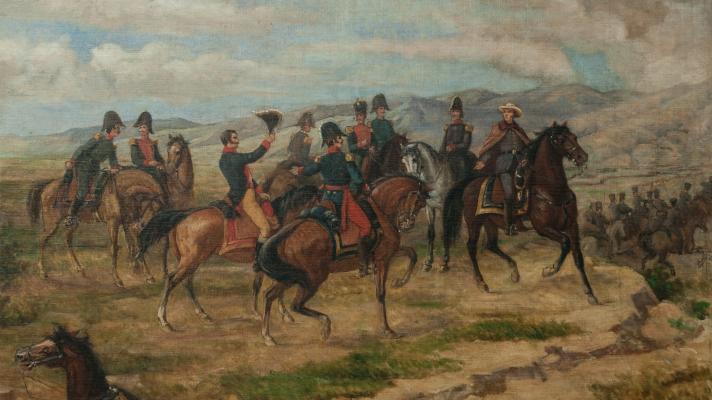 This June 24, Venezuela commemorates the bicentennial of the Battle of Carabobo in which, under the leadership of the Liberator Simón Bolívar, the patriots defeated the royalist army under the command of Spanish general Miguel de La Torre, thus sealing the independence of Venezuela. Already before the consummation of victory, Bolívar had reflected on how to continue the war outside of Venezuelan territory. He was fully convinced that as long as a single Spanish soldier remained in America, there would be no peace or stability for the new republics.

In order to coordinate actions and operations with the southern republics, he had written letters on May 2, 1820 to the Supreme Director of Chile, General Bernardo O’Higgins, and to the Supreme Director of the United Provinces of Río de la Plata (today’s Argentina). Likewise, on December 22 of that year, in a letter to the Vice President of Colombia Juan Germán Roscio, he expressed his intention that, as soon as circumstances permitted, he would march south to meet General San Martín with the same objective. Similarly, in preparation for the campaign in that area, in February 1821 he sent General Antonio José de Sucre to take charge of the Army of the South. All this happened long before the Battle of Carabobo took place.

Immediately after the victory, Bolívar headed to Caracas, where he entered on June 29, staying only a few days. On July 6 he moved to Valencia. He was greatly concerned about the concentration, in Puerto Cabello, of the Spaniards who survived after the battle. The economic situation was very difficult, and there was daily disorder and chaos. Furthermore, he was alarmed that his orders to hunt down and annihilate the remnants of Spanish soldiers dispersed after surviving the defeat suffered on June 24, were not carried out. In this sense, he had to severely reprimand General Santiago Mariño. In a letter to Santander [president of Gran Colombia, 1819-26] on July 10, Bolívar confessed that once the Spaniards were defeated, he would be concerned about the possibility of a civil war, and expressed his conviction that only unity and strength could protect Venezuela from it.

In that letter to Santander, and in one of the same date addressed to Fernando Peñalver, for the first time after Carabobo Bolívar takes up international issues. He tells both that he has no information about what is happening in Europe, except that Spain is still in poor condition and that the King of Portugal returned to Lisbon from Brazil, which he believes could be of great importance. These lines show that, despite the difficult internal situation in Venezuela, he did not abandon his idea of ​​prolonging the war outside the territory, for which knowledge of the international situation was vital.

He returned to Caracas on July 31, but was only there for five days. On August 5, he started the march again. He was extremely uneasy about Spanish plans to capture Coro and Maracaibo and from there attempt a reconquest campaign. However, on August 7, he issued precise instructions to organize an expedition with 600 men (later the figure would be increased to 2,000) in order to allocate them to evict the royalists from Panama.

On August 16, Bolívar wrote to Santander to announce that he was going to Bogotá, where he expected to arrive in mid-September (in fact, he did so at the end of October). He orders him to prepare an army of four to five thousand men “so that Peru will give me two sisters for Boyacá and Carabobo.” This was to be fulfilled a few years later after the patriotic victories in Junín and Ayacucho. In preparation for continuing the war, he instructed Santander to “send everything you have to the south, so that… a liberating army can be formed there.”

Two days later, Bolívar sent a letter to the new vice president of Colombia José María del Castillo y Rada in which he communicated that his main dedication during those days was to create “so to speak” a republic in Venezuela because, according to his own words in the country, “each individual and each man is a little world.” His concern for unity was obvious. He let the vice president know that his dedication to the task was total. He told him that he marched during the day and wrote at night, because he had no right to rest while there were enemies in Colombia, since his decision was to fight them until they were destroyed.

After the patriots recovered Coro, El Libertador believed that a certain stability had been created, allowing him to leave Venezuela in order to fulfill his purpose of linking the victory of Carabobo with the independence struggles of those countries where Spanish rule still prevailed. On August 23, he communicated to Vice President Carlos Soublette that it was necessary to promptly end the war in America, for which new sacrifices had to be made in order for peace to be complete and glorious. He concluded by noting that, in this context, his sights were on the south.

He was fully convinced that this was necessary to “unite the three sisters of Colombia.” His central concern now was that the situation in Quito would continue to worsen, which is why it was essential to organize an “army worthy of Boyacá and Carabobo.” As can be seen, after Carabobo, his main efforts were aimed at guaranteeing stability for Venezuela and Colombia and consolidating their independence by achieving the freedom of Quito. For this reason, he once again demanded that Santander form an army that could sustain “the honor of Colombia in Chimborazo and Cuzco,” that is, in Quito and Peru.

But Bolívar goes further, and proclaims that this army should show the way to the victors of Maipú and liberators of Peru, expressing his will to meet with General San Martín to achieve the freedom of South America together. He even ventures to say that he could contribute to the objective of providing peace to the Río de la Plata, immersed in internal struggles, and give life to the struggle in Brazil. That letter to Santander on August 23, in which he reflects on these issues, concludes by stating: “Everything is dreaming, my friend.”

Many of his dreams came true, others did not, which was not an obstacle to his commitment to them body and soul. Being able to remain in Venezuela to witness the many glories already conquered, his strategic thinking made him understand —like no other—that as long as there was some remnant of colonial power in the region, his task could not be completed. Bolívar assumed that he should put his leadership and organizational skills at the service of the Great Homeland. After Carabobo, he did not take a minute of rest, almost immediately he marched south to consolidate his colossal work in favor of independence and freedom.