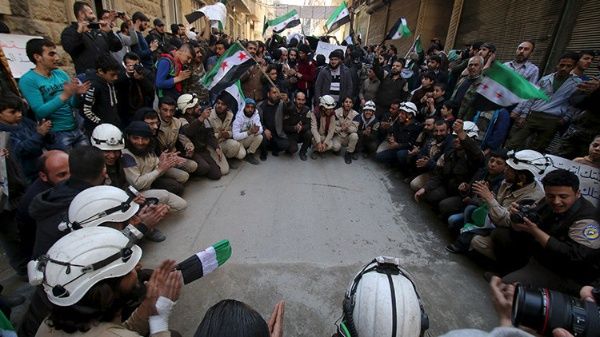 The “White Helmets” has gained wide international recognition after being nominated for the Nobel Peace Prize in 2016. Despite its prestige, the true origin of this organization is rarely disseminated.

The decision of the tycoon-president, Donald Trump, to order the return of more than 2,000 US soldiers fighting in Syria perplexed the political world. In fact, the Secretary of Defense of that country, James Mattis, submitted his resignation after describing the withdrawal of the troops as a “strategic error”.

Some fissures begin to appear within the White House government, because while the generals and military high command rejected with vehemence the decision of President Trump, the middle and lower ranks of the army celebrated the announcement. Analysts agree in assuring that the withdrawal of the armed forces in Syria obeys a media strategy of the president to appease the heated internal environment. It has nothing to do with Trump’s own representation that “the United States defeated ISIS and that, therefore, its mission in the Middle East was concluded.” In fact, the opposite is happening: the rebel forces have gotten a second wind and are preparing for an attack in the Arab Republic. Perhaps the fundamental reason is that the United States wants to avoid a humiliation similar to Viet Nam. However, the withdrawal of US troops can open a window of opportunity for a negotiated exit from the confrontations.

RELATED CONTENT: Moscow Calls on the US to Withdraw from Syria Before Commenting on Russian Presence in Venezuela

In fact, the war in Syria is one of the most virulent current conflicts if one takes into consideration the number of actors involved, the delicate balances of power and above all the number of deaths and physical damage caused. Thus, it is estimated that in almost nine years of confrontations (2011-2019), more than 500,000 people have lost their lives, of which about 43% are civilians and wi them thousands of children.

This panorama shows the complexity of the situation, since in addition to the various factions in combat and the truculent alliances, every day new actors and interests are added that seem to complicate the situation even more. And although the United States has announced its withdrawal from Syria, it should not be ruled out that this could be a ruse to continue the war on other fronts.

During the course of the war, several groups (legal and illegal) have gradually joined the confrontational sides; others provide humanitarian aid, as is supposedly the case with “white helmets”. This organization, created at the beginning of 2013 as an “alternative humanitarian force”, operates in the territories affected by the violence in Syria and its borders. Its objective is to help the victims and rescue innocent people who are in crossfire. With more than 3,700 volunteers, the “white helmets” participate in rescue activities as manifested by its main spokesman, Raed Saleh. The organization has gained wide international recognition after being nominated for the Nobel Peace Prize in 2016 and having achieved, for its supposed humanitarian work, the “alternative Nobel” of the Swedish foundation Right Livehood.

Despite its prestige, the true origin of “white helmets” is rarely disseminated. In the dawn of 2013, former British army officer James Le Mesurier, began training the first “civil defenders” in Turkey. For that reason, contrary to Western majority opinion, the origin of the Syrian Civil Guard has a clear military influence. In fact, Le Mesurier served in the infantry of his country during campaigns in Bosnia, Kosovo and Northern Ireland to then conduct consultancies on security and counterterrorism issues in the United States, Britain and the United Arab Emirates. In this way, the godfather of the “white helmets” is part of one of the active participants in the conflict and is an agent that continues to serve the interests of his nation.

Hence it is implausible to believe that the “white helmets” are a humanitarian and “neutral” force in the conflict. On the contrary, they are an organization supported not only by Western governments that finance it financially but also by the United States Academy of Arts, which in 2017 awarded an Oscar to a documentary that exalted in an exaggerated and uncritical manner the badly designated humanitarian organization. This overexposure in the mass media has caused the “white helmets” have quickly become the heroes of the conflict. However, in several video clips they have been betrayed as real actors and producers of false rescues. For this reason, the organization has become an audiovisual company that, sheltering itself in supposed humanitarian actions, hides a clear political tendency that favors the interests of the great Western powers involved in Syria. It should also be noted that the website of the “white helmets” belongs to the group of lawyers TheSyriaCampaign, registered in the United Kingdom.

The so-called “civil guards” have played a double role in the conflict in Syria. On the one hand, they have become an effective means of discrediting the defensive actions of the government of Bashar Al Assad and the Russian army and, on the other, they have concealed the harassment and serious damage caused by the killings perpetrated by foreign governments, i.e., their allies. All this pantomime is done through edited videos in which they are presented as “humanitarian saviors”. However, a series of videoclips have been circulated, evidencing their clear support for Western doctrine, which transforms into provocative exercises that deepen the cycle of violence, with which their contribution to the solution of the conflict has been almost null

Their “neutral and anti-war” discourse is nothing more than a strategy to win the support of unsuspecting Western media companies. In videos members of the “white helmets” have been recorded with weapons and even supporting factions of groups like Al Qaeda. It should not be forgotten that the main funder of the terrorist organization was and has been the Pentagon. Then, under the cover and prestige of being a “group of volunteers who carry out humanitarian actions”, the “white helmets” have hidden terrible crimes and have offered support to groups that have caused irreparable damage to the civilian population. It is curious that the organization only operates in areas controlled by the Al Nusra Front (linked to Al Qaeda) and that multiple organizations, including the Swedish Physicians for Human Rights, have classified as false the procedures they observed in an audiovisual product prepared by the “white helmets”. All this evidence shows the accommodations of the supposed humanitarian organization.

In addition to the above, it is worth mentioning the support that the “white helmets” have received from states such as Israel. Indeed, after the false accusation against the Syrian government of using chemical weapons in Duma, east of Damascus (something that could never be proved), the false humanitarian group had to flee the country demonstrating in this way who financed their activities of disrepute and false propaganda. The Prime Minister of Israel, Benjamin Netanyahu, supported the evacuation of at least 800 members of the organization and their families from Syria to Jordan, proving that the “white helmets” are not a neutral or an apolitical group. On the contrary, they obviously serve particular interests, paid for by their bosses who are in comfortable chairs in Washington, London and Ottawa.

The obvious question is: what level of independence can a supposed humanitarian organization have that is financed by the great powers of the world? The main donor of the “white helmets” is the United States Agency for International Development (USAID) which contributed more than 23 million dollars in 2015. For its part, the British Ministry of Foreign Affairs recognized a contribution of about 3.5 million pounds sterling to support the so-called Syrian civil defense, which joins other donors in Japan and Denmark and even the tycoon George Soros. Thus, it is confirmed that the “white helmets” are not any “humanitarian force” but are more like a class of professional agitators and producers of audiovisuals financed by powerful governments that seek to meet their basest interests, passing over even the pain of the victims.

The strategy of this group is to conduct the “conflict by other means”, turn the war into a spectacle and present the West as “humanitarian saviors”. However, the effect has been contrary to what had been proposed, since seeking to attack and discredit the governments of Syria and Russia, the only thing they have achieved is to lose credibility of the actions that they supposedly carry out in a disinterested manner. The funny thing is that the “white helmets” have not helped the victims who support the Al Assad government, so their “humanitarian action” is selective and discriminatory. All in all, the only thing the Syrian “civil defense” has been able to do is to deepen warmongering actions in the territory.

To summarize the above, it is necessary to say that the self-appointed Syrian civil defense is not an authentic and genuine democratic force committed to the solution to the conflict in Syria as the media and even the cinema have wanted to present it. The “white helmets” have a hidden face that is characterized as an infiltrated organization and financed by foreign governments that pursue specific gains and interests that are based on the prolongation of the conflict. The ambition of the great Western powers led by the United States and the United Kingdom demonstrate once again that war is a lucrative business and that they do not mind trampling the victims they hypocritically claim to defend.