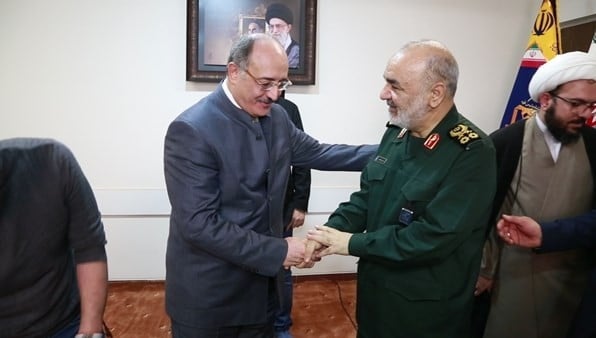 The response to the murder of General Martyr Qassem Suleimani (or Soleimani) occurred at a specific place, but its effect was global, said the commander in chief of the Revolutionary Guards in Iran, Major General Hussein Salami, in an exclusive interview with Ghassan Ben Jeddou, president of the Board of Directors of the Panarabic Al Mayadeen Satellite News Network.

The response to the murder of General Martyr Qassem Suleimani occurred at a specific place, but its effect was global, said the commander in chief of the Revolutionary Guards in Iran, Major General Hussein Salami, in an exclusive interview with Ghassan Ben Jeddou, president of the Board of Directors of the Panárabe Al Mayadeen Satellite Information Network.

In this regard, he pointed out that “the first dimension of our response to the murder of Suleimani was emotional because the Americans attempted against figures that have a prominent place in the hearts of Muslims and free men.”

“General Suleimani occupies a very distinguished place in the hearts of the Iranians and the oppressed peoples, and his murder was a shocking event,” he said.

“Our response occurred at a specific geographical point, but its impact was global. The action against the United States was defensive par excellence, which is legitimate and legal,” he added.

The commander in chief of the Revolutionary Guard in Iran said Suleimani entered Iraq at the invitation of its leaders, and moved publicly and officially. Therefore, the American action was an obvious injustice.

He considered that the response to the murder of Suleimani was military par excellence as it should have been: a clear and understandable response that everyone could see.

“We had to stop the Americans at that point and let them see that they should change their calculations regarding their confrontation with Iran,” he said.

“The Americans are used to face any country without a reaction, and this led them to misbehave in their attacks on Iran. Trump threatened to attack 52 locations in Iran if we carried out a military response, and we responded by stripping Washington of its artificial prestige,” he said.

He reiterated that “the military response was strategic and limited, but it demonstrated our strength and our ability to strike a direct blow against US bases. The goal was to show Washington’s real strength in psychological operations and its real power on the ground, and this changed the world’s view of them.”

At another time in the interview, Salami said the attack on US forces in Iraq was not the end of the strategic response, but its starting point.

Salami stressed that there is no objective in the United States that has the weight of the martyr Suleimani, “and if we gather Trump with all his officials on the other side of the scale, then Suleimani will still have more weight,” he said.

He remarked that responses will continue, but in different ways. “The main response will take place when the objectives of the martyr Suleimani are achieved,” he said.

IRGC Commander said that these objectives revolve around the collapse of the Zionist entity and the elimination of its existence and the American presence in the region.

Later, he said that the Iranian authorities chose the answer to be on Iraqi soil because these two great generals were killed there.

“We were ready in the most extreme level of state mobilization to launch devastating missiles. Hundreds of rockets were ready to be launched against other bases. We were ready to face and win the various possible scenarios of war,” he said.

“The United States tried to impose an international political isolation on us, but they failed because we played professionally in the field of politics. They spent billions of dollars in the region, but failed and their political and military prestige was beaten,” said Salami.

The commander in chief of the Revolutionary Guards in Iran, Major General Hussein Salami, said the martyr Suleimani united the Islamic world and established a united front and built forces to confront the Zionists and the Americans. Suleimani is the designer of the defeats and failures of the United States in this region.

“The participation of tens of millions at Suleimani’s funeral is evidence that all Washington’s expenses were useless,” he added.

He also considered that all underdevelopment in the Islamic world is due to the politics of the Americans. “Trump himself said that Obama is the founder of Daesh, and this is an admission made by an American president,” he said.

“The Israelis must pay attention to the fact that they face a Hezbollah, which has become more armed, more immune and more experienced,” General Salami said in an exclusive interview with Al Mayadeen.

On the matter, he said: “We send a warning to the Israelis, who are much smaller and more incapable than the Americans, that all the points they occupy are within our range of fire.”

“Today there is great potential to eliminate (Israel), but the circumstances so far are not conducive to this happening. The Israelis should not count on the Americans, as others have done so and have not achieved any results,” he said.

He warned that Iran has developed its capabilities on a global scale even to reach the level of a largest military power in the world.

Returning his comments to General Suleimani, he said he was a strong person, but the authority and popularity he had gained did not make him a self-sufficient person.

“Suleimani moved among the people, even standing on the bus, taking pictures with the countrymen, he was the owner of the hearts (of Iranians). Suleimani was not only a military man, he had a great capacity for political analysis,” he added.

He recalled that Suleimani prevented many defeats from happening, that Islamic states were divided and that their villagers were displaced. “He was a true defender of Palestine, and the liberation of Palestine was, for him, the ultimate goal.”

According to Salami, General Suleimani was a lover of the Wilaya (Supreme Leadership Authority of the Iranian Revolution) and considered himself a soldier of the Wilaya, as it was written in his Mausoleum.

“The relationship of the martyr Suleimani with the Imam Khamenei was a mutual heartfelt relationship and he esteemed him very much,” Salami said.

The commander-in-chief of the Revolutionary Guard in Iran said borders are not a standard or reference point for choosing the fields of fight.

“When any Muslim in the world is exposed to injustice, we will be there by his side. We will all follow the path that Suleimani traced, we believe in this path and our desire is to fall in combat to be faithful to him,” he said.

“The fact that Trump boasts of the murder of a great figure like Suleimani indicates that the martyr was great. Trump today represents terrorism and has carried out a cardinal murder by attacking Suleimani, and must be ashamed of himself,” he said.

He emphasized that the Americans will face painful consequences, will repent and will know who the martyr Suleimani was. “Nothing is over yet. Suleimani is a unique and unrepeatable leader, his path will continue and perpetuate and there are already societies and leaders [working] in Suleimani’s method.”

The blood of the two martyrs Suleimani and Al Muhandis – he commented – changed the course of Iraq and imposed isolation on the Americans and has disturbed them ever since.

On the other hand, General Salami expressed that Iranian support to Palestinians, Lebanese and Syrians will be more than in the past, and reaffirmed that they will defend Yemen, Bahrain and Afghanistan.

“Trump and Netanyahu,” he said, “should not presage the good of their policies in the Islamic world, as both will be buried alongside their policies.”

In this regard, he added that Iran has proposed to stand out as a military force on land, sea and air, and wants to be a force that can defeat the United States and its allies.

“We have only shown a small part of our missile capabilities and the enemy saw their accuracy and ability to bypass US air defense systems. And despite US sanctions on the military, we have created these capabilities without relying on any foreign power,” he said.

He added: “Our drones fly thousands of kilometers, perform precise operations and manage to avoid air defense systems. Our defense is also much more precise than that of developed countries, and we have relied on ourselves to manufacture them.”

He insisted that Iran today can fight great battles in the seas through thousands of fast and slower boats. On the ground it has an infinite power of popular mobilization.

“And when I talk about power, he said, I mean the Revolutionary Guard and the Army, which is very strong today, with powerful motivation and faith. The more the enemy seeks to sabotage the relationship between the people and the Iranian Revolutionary Guards, the more the people believe in us, because we protect this people and are fighters to death.”

“Today and tomorrow we will continue on the path of the martyr Suleimani until we achieve his goals and he is satisfied with us, until we meet him again,” he concluded.

Featured image: Meeting between the commander in chief of the Revolutionary Guard in Iran, Major General Hussein Salami, and Ghassan Ben Jeddou, Chairman of the Board of Directors of the Pan-Arab Satellite Information Network Al Mayadeen.