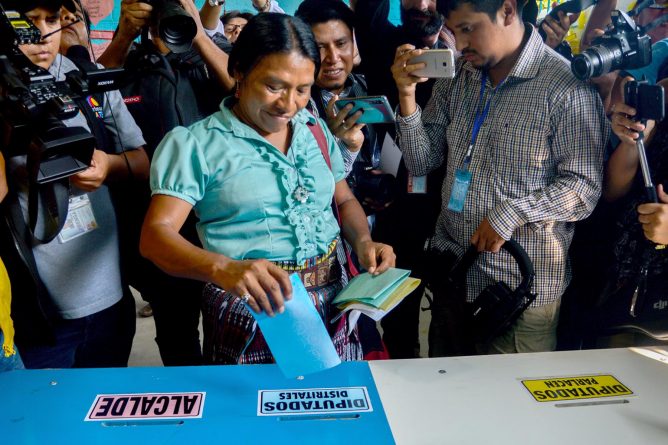 The campesino leader is running for president in a country whose indigenous majority is chronically overlooked – and she has a chance of making the runoff.

An indigenous campesino woman who pledges to root out racism is hoping to cause a historic upset in Guatemala’s elections on Sunday, amid simmering voter anger over political corruption.

Thelma Cabrera Pérez, 49, has unexpectedly risen in presidential polls after a frenetic campaign across Guatemala’s rural heartlands where organised crime and agriculture magnates have controlled land and politics since the 36-year civil war ended in 1996.

Cabrera, a Maya Mam indigenous rights defender, is currently polling fifth in a crowded field of 20 candidates, but Guatemalan polls are notoriously weighted towards urban areas, and analysts believe she has a serious chance of getting through to a runoff vote in August.

Win or lose, her political ascent marks a historic achievement at a time when trust in the country’s status quo is at rock bottom.

About 60% of the Guatemalan population is indigenous, but Cabrera is only the second indigenous person to run for president after the Nobel Peace prize winner Rigoberta Menchu.

Indigenous groups suffer the highest rates of malnutrition, illiteracy, landlessness, social exclusion and poverty – all of which have helped drive waves of emigration. In November, Guatemalans overtook Mexicans as the largest group detained at the US border, and the regions where most migrants set out from are overwhelmingly indigenous.

Cabrera pledges to tackle the inequalities of Guatemalan society with a sweeping constitutional reform to ensure fair representation for the country’s indigenous, Afro-Guatemalan and mestizo peoples.

Other priorities include stopping illegal land-grabs, ending immunity for elected officials, nationalisation of electricity, and legal scrutiny of mining, dam and agricultural licences sanctioned without consultation.

“I didn’t ask for this role or buy it – I was elected for this mission by the people, and I’m daring to break the silence as a Mam woman,” Cabrera told the Observer.

Cabrera, who speaks Spanish as a second language, grew up in El Asintal, an impoverished community on the west coast, where she worked on coffee fincas with her parents and siblings, and was married at 15.

“I came from nothing – from under the rubbish. But for many years I’ve worked with communities suffering lack of opportunities, undignified wages, migration and violence as a result of structural problems and corruption,” she said.

She was selected by grassroots members of Codeca, the country’s largest campesino organisation to represent its newly formed political party the Movement for the Liberation of Peoples (MLP).

Cabrera’s political hopes were given a major boost by a recent online campaign organised by volunteer communication experts who designed the slogan Yo Elijo Dignidad (I choose dignity).

As the buzz around Cabrera got louder, the criticism got uglier. She’s been derided as uneducated and uncouth, and condemned as a radical communist who wants to turn Guatemala into the next Venezuela – an accusation she denies.

“She’s given a face and voice to the excluded majority with a radical political project to disrupt and transform the oppressive state. She’s unlike anything we’ve seen since the 1940s,” said Andrea Ixchiu, a member of her communications team. “This candidacy is historic.”

The election race has been marred by repeated accusations of corruption as a UN-backed commission against impunity (Cicig) prepares to leave the country after President Jimmy Morales unilaterally declared an end of its mandate.

The current frontrunner is Sandra Torres, a former first lady accused of money laundering and illicit campaign financing. In second place is Alejandro Giammattei who was director of prisons while a clandestine death squad carried out extrajudicial killings of detainees.

In third place is the businessman Roberto Arzú, who faces sanctions in Miami for failing to comply with a court order to pay off multimillion-dollar debts to his political strategist.

The odds are stacked against Cabrera, who closed her campaign last Saturday by thanking in Mam her supporters who had travelled overnight from remote villages with homemade signs.

But for many at the event, the hopeful atmosphere was reminiscent of the 2015 anti-corruption protests that eventually led to the resignation, arrest and imprisonment of the then president, Otto Pérez Molina.

“It’s time the state stopped being racist – and for that we need structural reforms,” said Linda Rabanales, 24, an anthropology student. “That’s why I’m voting for Thelma.”