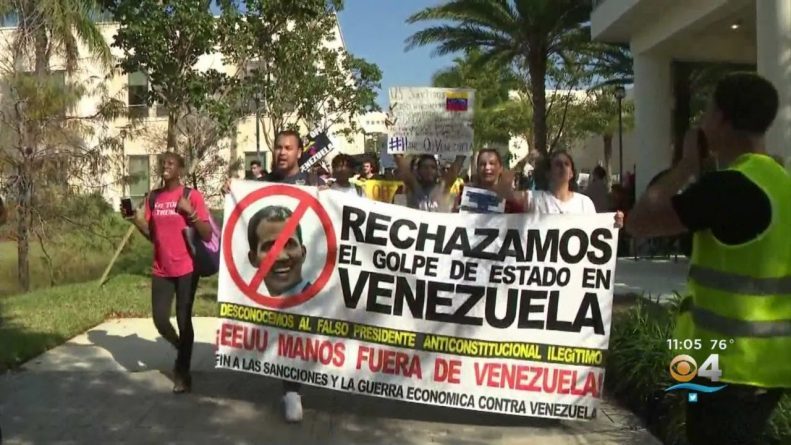 Yesterday in the Florida International University, Miami Campus, the US President, Donald Trump organized a political rally to nurture his radical right-wing supporters and Senator Marco Rubio (at the time in Cucuta-Colombia preparing the US “aid”) in a clear attempt to add support for his 2020 Presidential Race, in this very important electoral state.

He did it with the excuse of “Regime Change” in Venezuela in the name of fighting an ‘humanitarian crisis’ that do not exist in reality but that has been encouraged and promoted by US sanctions imposed on Venezuela since 2015.

The only thing they did not expect was the wonderful show of force organized by students of that University opposing Trump policies especially the one related to Venezuela. “The political calculation from the White House might have crashed with something most political analysts have been saying in recent year, which is that right-wing core in the state of Florida have been shifting to the left due to the generational gap between hard core gusanos and the millennials that are far from being as radicalized as their relatives”, said to OT a political expert.

Below you will find some video footage posted on Twitter. “The chavismo in Venezuela is indebted to these young US companeros for showing their support” a Venezuelan political expert said to OT.  This evening, President Maduro referred to the protest in Miami, from a graduation ceremony of medical students he attended and showed his admiration for the bravery of these US students and activists.

Trump came to #FIU today and we had a lot to say back #TrumpHandsOffVenezuela #Trumpresign pic.twitter.com/v4ciOTv1uD

When Trump came to Florida International University to deliver his speech he hoped to find a friendly audience, but outside young students said loud and clear #HandsOffVenezuela #TrumpHandsOffVenezuela pic.twitter.com/2ANi3uLlRw

This afternoon on Florida International University campus, students protested as Trump was speaking.#TrumpHandsOffVenezuela