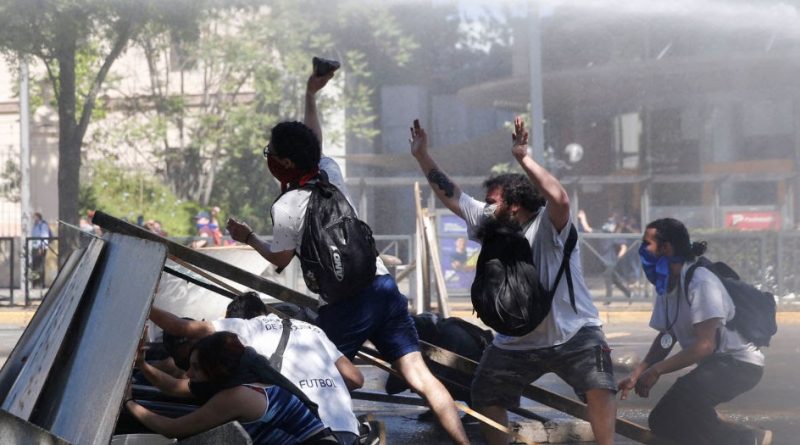 Mass protests against the Sebastian Piñera Administration continue in Chile regardless of a curfew imposed by authorities; a nationwide strike is being organized for today by several workers unions. One union activist Esteban Marturana, told Sputnik that demonstrations of this kind have not taken place since the last dictatorship in Chile.

“Chile had not seen such an outburst of people’s unrest in 30 years as the one we are living now,” said Marturana, leader of the National Confederation of Municipal Health (CONFUSAM), one of the workers’ unions calling for a general strike against police repression.

The strike had been initially called to demand that funds be directed public health but the state of emergency and the curfew imposed by the Chilean Government caused a change scope and direction of the strike.

The leader highlighted the support given by social organizations to the protests, which erupted spontaneously among students who use the Santiago subway system every day. The triggering event was indeed the decision taken by the “panel of experts” in charge of setting increases in transport fares, rising it by 30 Chilean pesos.

The increase, which came into effect on October 6, hiked the subway fare up to 830 pesos ($114) during rush hours in the morning and evening.

Protests began on October 14 and continued even though Piñera retracted on the price increase. He also pulled back on other demands by the people

“The problem is not about the 30 pesos hike. This is about 30 years of corruption and abuse on behalf of the political class, the Church, and Armed Forces,” Marturana stressed. He went on to say that demonstrators, are now demanding “a reform to a Constitution that dates back to the dictatorship,” as well as “high quality health and public education.”

According to Marturana, the only solution to the crisis as the one like the one we have lived in the country is that President Piñera calls for a “social pact” to analyze the claims of the poor sectors of society, such as a 40-hour work week for instance. The member of the CONFUSAM also commented that it is necessary to call for a National Constituent Assembly.

Similarly, he condemned the actions carried out by police and military forces that are repressing demonstrators. Confrontations have resulted in at least 15 deaths, according to official information, most of them due to fires inside stores.

“We think there will be more casualties anyways. You can see several videos in the social media of officers appointing their guns at demonstrators running or lying on the ground. This uprising has burst out of control of the inept Piñera government forcing it to invoke the Emergency Law and a curfew.”

“These things happen when soldiers go to the streets,” said the worker’s leader, warning that “every time a governor puts shields on the Armed Forces, people end up bearing the consequences.”