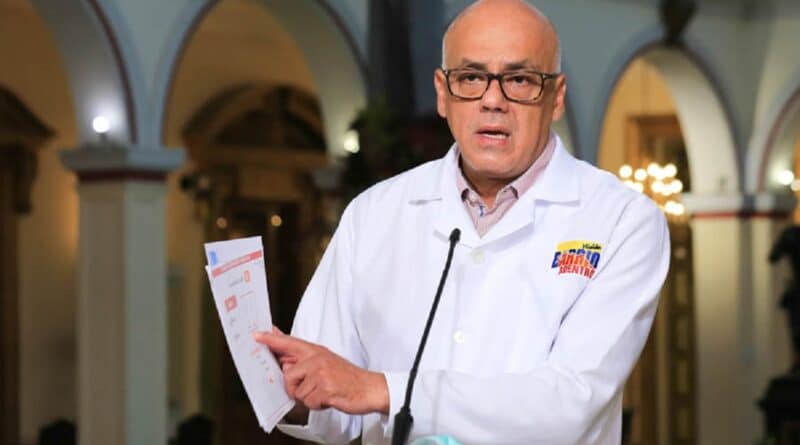 In the last 24 hours, Venezuela has detected 834 new cases of Covid-19 infections by community transmission and 35 imported, for a total of 869 for this Saturday, August 1, in addition to five new deaths. This was reported by the sectoral vice president of Communication, Tourism and Culture, Jorge Rodríguez, in statements via telephone to Venezolana de Televisión after the meeting of the Presidential Commission for the prevention and combat of Covid-19.
With this figure, the country reaches a total of 19,443 cases since the fight against the pandemic began in the nation 139 days ago.

He explained that of the 869 positive cases detected in total in the last 24 hours:

He emphasized that in 21 of the 22 parishes in the Capital District there is a presence of Covid-19.

Of the 35 imported cases, Rodríguez indicated that 32 come from Colombia, one from Brazil and two from Peru.
Of the 19,443 people with Covid-19 as of today Saturday since the pandemic occurred in the country, 11,129, 57% of the total patients have already fully recovered and 8,145 cases are active, of which 98% are being cared for in the national public health system.

Rodríguez regretted the death of five positive patients with Covid-19, which increased the number of deaths to 169 in the country.
He pointed out that of the deceased, two were inhabitants of the Capital District, one from the Zulia state, one from the Merida state and the other from the Guárico state.

He indicated that the number of tests applied for the screening of the Covid-19 amounts to 1,545,895, which is equivalent to 51,530 tests per million inhabitants. “We are one of the countries that performs the most tests per million of inhabitants for Covid-19 infection,” said the sector vice president.
On the other hand, he insisted on the call to the entire population to respect health protocols and prevention measures to stop and cut transmission chains. Rodríguez stressed the importance of using the mask as one of the fundamental tools to cut the contact chains of the Cóvid-19, as well as respecting the rules of social distancing.
Likewise, in view of the start on Monday of a new stage of easing the quarantine in the country under the 7 + 7 scheme at three levels, Rodríguez was emphatic in urging the people to respect each of those levels that allow some type of economic activity. “In the case of level 1 radical quarantine, especially in areas where they have important sources of infection, such as Caracas, Miranda, Sucre, Bolívar Zulia. Then there are levels 2 and 3 with staggered situations of flexibility,” he said.