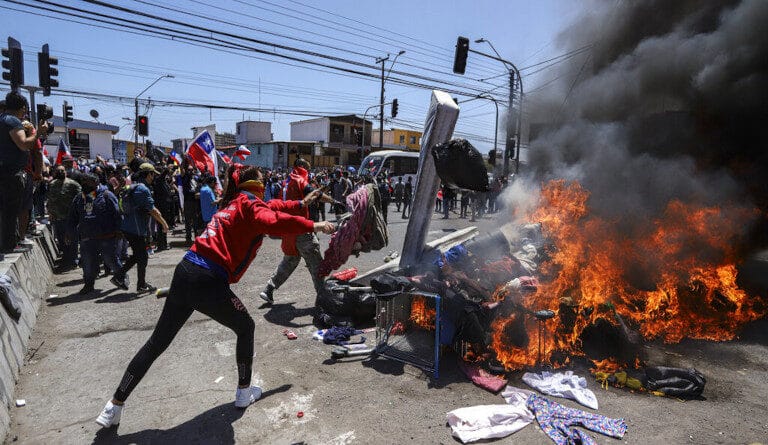 On Monday, October 18, Chilean Police reported that three men have been detained for involvement in violent actions against Venezuelan migrants in Chile. The detainees are accused of setting fire to tents where undocumented Venezuelans were living, during a September 25 anti-migrant protest in the city of Iquique in northern Chile.

According to a statement by the Chilean Investigative Police (PDI), “the detainees were placed under the order of the Supervisory Court of Iquique, being charged with the crime of arson, decreeing a prohibition on leaving the country, plus nightly house arrest and a prohibition on attending further marches.”

On September 25, some 3,000 people held a demonstration against Venezuelan migrants living in the public squares and beaches of the port city of Iquique, located 1,800 km north of the capital, Santiago. Some of the protestors set fire to the migrants’ tents and other belongings.

After an inquiry and an analysis of images taken during the demonstration, the police were able to identify and arrest three “alleged inciters and perpetrators of the crimes of arson and property damage.”

The protest featured xenophobic slogans and banners bearing anti-immigration slogans directed at the Venezuelan migrants. These migrants reached Iquique after crossing the inhospitable Bolivian border on foot and arriving in the town of Colchane in Chile, of 1,600 inhabitants, located at an altitude of 3,650 meters.

Featured image: Protesters burnt tents and items belonging to Venezuelan and Colombian migrants during an anti-migrant march in Iquique in northern Chile on September 25. Photo: AP