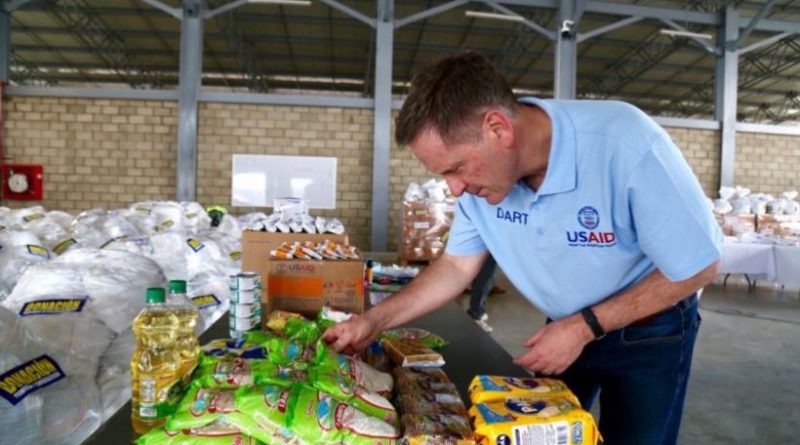 Latin America and ALBA-TCP Opinion
September 24, 2019September 24, 2019 orinocotribune Colombia, Corruption, Migration, NGO for Imperialism and Regime Change, USAID, Venezuela
OPACITY AND POSSIBLE CORRUPTION OF ONE OF THE MOST DELEGITIMIZED INSTITUTIONS OF THE US GOVERNMENT
When the United States Development Agency (USAID) extendss cooperation and “humanitarian aid” in a country or region, rather than seeing it as an altruistic action we must determine the hidden interests that operate behind it.

The body founded by John F. Kennedy in 1961 and whose principle is “to provide non-military assistance outside its [US] territory”, has a long history of interference in the sovereignty of nations that do not align with the foreign policy of domination that the North American country exercises.

As Jean-Guy Allard, a late Canadian journalist and researcher, characterizes it, USAID serves as an espionage and interference device in any geography where the United States wants to extend its influence.

In the book “USAID, NED and CIA: The permanent aggression”, Allard describes how the US institution has been involved in regime changes through direct support to the opposition in certain countries, a fact that has been recognized by the agency’s own authorities.

He also says that this institution is an intricate system of corruption that diverts millions of dollars through propaganda narratives of the miracle of “humanitarian aid” in the United States.

VENEZUELAN MIGRATION: A BUSINESS IN LATIN AMERICA?
On September 4, USAID published the report corresponding to fiscal year 2019. In the document, John J. Sullivan, undersecretary of state, and the administrator of said institution, Mark Green, announced the financing of more than 120.2 million additional dollars for the response to the crisis in the region caused by Venezuelan migration.

The agency maintains that this increase is justifiable because the exodus has collapsed medical services in border areas and there is a risk of infectious diseases spreading.

The agency points to the government of President Nicolás Maduro as the cause of the political and economic crisis that forces thousands of people to flee their territory. The cynicism is evident when it is obvious that the country it represents is directly involved in the hyperinflation that they point to as one of the main causes of migration in Venezuela.

In recent years, the United States has intensified the financial and commercial blockade against Venezuela. This, without a doubt, has generated a severe impact on the purchasing power of products and services by Venezuelans.

The report details that between the US Department of Population, Refugees and Migration and the offices of Foreign Disaster Assistance (OFDA) and Food for Peace (FFP) of USAID, more than US$ 333 million are allocated to help refugees, an amount that excludes the 20 million announced by the Secretary of State, Mike Pompeo, earlier this year.

According to the report, this money will allow NGOs to continue providing support to Venezuelan migrants moving through the continent. These organizations constitute the arm of the United States intervention policy while, as recipients of money, they are committed to their foreign policy objectives.

In addition to Colombia, which received the largest amount of funds for being the main recipient of Venezuelans, Brazil, Ecuador and Peru join the list of nations that receive money from the United States to address Venezuelan migration in the region.

These additional resources, USAID says, are due to the fact that in August it was estimated that 4.3 million Venezuelans were outside the country and this figure is projected to increase this December, according to data provided by the International Organization to Migration (IOM) and the Office of the UN High Commissioner for Refugees (UNHCR).

RELATED CONTENT: Venezuela Denounces the Dismantling of PDVSA’s Monomeros Corporation in Colombia by Guaido and Duque

This measure, which came into effect on August 26, caused many Venezuelans to stay in Rumichaca, a border crossing between Colombia and Ecuador. This migratory policy of Ecuador affects Colombia while, in addition to being a mandatory territory for Venezuelans traveling through South America, it “congests” another border area of that country.

USAID AND THE NGO SCAM
According to the policy of the US agency, these NGOs that receive the money must provide food vouchers, hot meals, as well as training to improve nutrition. They must also guarantee health care and psychosocial assistance to families that require it.

UNHCR, through the 1984 Declaration, “expanded the definition of refugee to include people who have fled their home countries due to threats to life, liberty or security due to public order disturbances due to foreign aggression, violence in general, internal conflicts and serious violations of Human Rights.”

Although the number of Venezuelans outside their territory has increased in recent years, the migratory flow is not comparable with other similar phenomena in the Middle East and Africa.

In May of this year, the Colombian Foreign Minister, Carlos Holmes Trujillo, argued that the resources granted to his country by the UN, 228.1 million dollars, were insufficient to serve the displaced who arrived from Venezuela, according to the EFE agency.

FORCED COMPARISONS
In an EFE piece, they detail that the displacement of Venezuelans in Colombia is only outnumbered by the immigration crisis in Syria, a country that has been overcoming a terrorist war for more than eight years, a conflict imposed by the West that has already taken the life of more than 300 thousand people.

Attempts have been made to propagate the narrative of the “humanitarian crisis” in Venezuela and to manipulate its side effects in the region. According to the UN, only in Colombia, there are supposedly more than 1 million 400 thousand Venezuelans. If this volume of people were there as refugees, the expense in economic and human terms would be incalculable.

On the other hand, organizations such as UNHCR, which claim to be deployed in border areas of Colombia and Brazil, offer few details of the number of temporary shelters installed.

“So far, 13 temporary shelters have been opened in Boa Vista and Pacaraima, which house more than 6,000 Venezuelans. In Maicao, Colombia, a temporary care center was inaugurated in March 2019, which was established upon request of national and local authorities, with an initial capacity to accommodate about 350 people,” is the only reference in this regard on its website.

The Coordination Platform for Refugees and Migrants of Venezuela is made up of 41 organizations, including 17 UN agencies, 15 NGOs, donors, financial institutions and the Red Cross. This multisectoral organization, although it has a more detailed report with the projections for this year, does not offer a concrete account of the number of services.

USAID’S NOT-SO-HIDDEN AGENDA
True to the principles of intervention, USAID has been in tune with the political events inside and outside Venezuela.

The institution says it remains neutral in the face of the Venezuelan political conflict but praises its link with the National Assembly (AN) and describes Nicolás Maduro as former president of the Republic.

Since the political crisis in the country worsened, with the self-proclamation of Juan Guaidó as head of the Venezuelan State in January of this year, USAID began to recognize him as president in charge.

In February, the Venezuela Aid Live concert, organized by billionaire Richard Branson, was held to collect funds that would be allocated to those displaced by the Venezuelan “crisis.” The total amount collected and the destination of these resources are currently unknown, but it is known that Juan Guaidó got there through the logistic favors of the Los Rastrojos paramilitary group.

This event was to be the preamble for “humanitarian aid” to cross through the borders from Colombia and Brazil. Much of this “help” was granted by USAID.

As a measure to protect the country, President Maduro made the sovereign decision to close the borders (in response to a similar decision from the Colombian side) and with that the epic that was intended to be created was demolished.

CORRUPTION AND FALSE FLAG
Subsequently, a journalistic investigation by PanAm Post revealed that those in charge of Guaidó to manage the “humanitarian aid” of USAID and other governments in the region had embezzled the funds.

Expenses of thousands of dollars in hotels, payments in stores and restaurants, and a list of Venezuelan military deserters inflated to receive more funds, were some of the acts of corruption committed by the friends of Guaidó, Rossana Barrera and Kevin Rojas, undeniable facts that were detected by Colombian intelligence.

The reportage of Orlando Avendaño, editor-in-chief of that media, also indicates that at least 60% of the food intended to enter Venezuela had been damaged. This showed that “humanitarian aid” was used more as a political flag against the Maduro government than as a gesture of corporate altruism.

THE INVESTMENT OF RESOURCES AS A FORM OF CONTROL
With the arrival of Hugo Chávez, Evo Morales, Rafael Correa, among other governments not aligned to Washington in Latin America, USAID began to increase its support to “promote democracy.” This translates as funding to the opposition in Venezuela, Bolivia and Ecuador and other countries that show autonomy from Washington’s policies.

It is naive to believe that behind the goodness of the United States there is no plan to impose its agenda. Historically, the resources provided for “humanitarian aid” is proportional to the level of dominance they want to establish in that territory.

USAID has acted as a frontal and active political actor in the international siege against Venezuela. Said by its own president, his intention is to promote a change of government: “For the good of the Venezuelan people and the entire region, we must expect the Maduro regime to release its overwhelming control and see a return to democracy and the state of law “, as is written on its website.

Most of the resources provided by the United States for “humanitarian aid” have been allocated to the Colombian Department “Norte de Santander”, which has been the base of operations for all the aggressions that have been carried out against Venezuela, including the assassination attempt with drones of 2018 against President Maduro and the terrorist plan unveiled recently.

Featured image: The head of USAID, Mark Green, simulates that he reviews products in Cúcuta, the city with the highest reception of “humanitarian aid” for migrant Venezuelans (Photo: US Embassy in Colombia)
Source URL: Mision Verdad