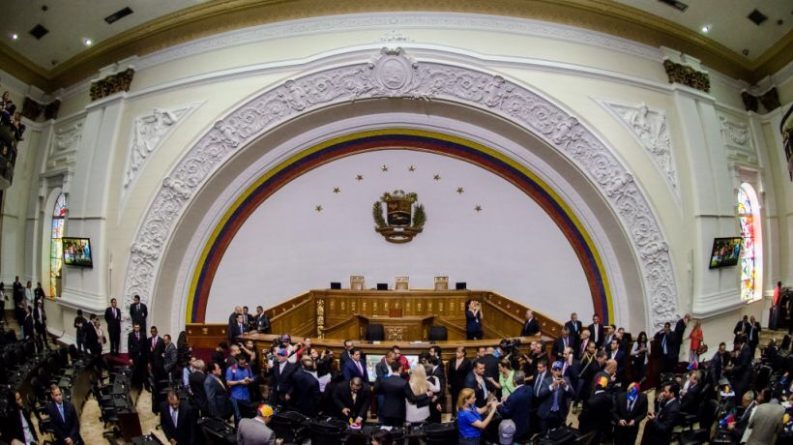 The opposition deputies are in the task of landing the maneuver to decree the figure of power vacuum, developing the actions within the legal framework that delineate the arguments to annul the national government.

For this reason, the preliminary draft of the Transition Statute Law was discussed, a document that has not yet been included in the laws of the National Assembly (AN) web portal.

What are the main aspects that are discussed within the AN? The corresponding to the ways to materialize the seizure of power. Only by announcement you can not revoke the command of Nicolás Maduro.

After Guaidó in a first attempt invoked the “restitution of constitutional order”, the scenario was opened to materialize the transition.

A special commission was delegated to evaluate this preliminary bill, days prior to the swearing in of President Nicolás Maduro. Juan Miguel Matheus, parliamentarian who presented the text, relies on Article 233 of the Constitution on a abandon from office premise that does not apply, as a starting point to create the statute, a figure that allows the transition and exposes the areas that would be addressed, including the steps to follow for that seizure of power.

In this sense, the transition law works on three central areas. The first one (already in progress) is the not recognition by the National Assembly of the elections held on May 20, 2018 and the current presidential representation, taking the attribution of designating themselves as the “only legal authority” in the country.

The support of international organizations and countries in the region is the essential feature of this area in the path that leads to the installation of a parallel government.

The National Security Council, in the voice of John Bolton, comes out to confirm the intellectual authorship of the White House in the layout of the legal framework that protects the AN in search of its legitimacy.

In a statement from the adviser, he gives support to the AN. It also details the logistical support via financial aggressions stating that they will continue “using the full weight of the economic and diplomatic power of the United States to press for the restoration of a Venezuelan democracy that reverses the current constitutional crisis.”

Instances such as the OAS and the most hostile countries against Venezuela have already defined their role in the legitimization of a parallel government, but the question remains of nations that opt for lukewarm temperatures when defining extremist diplomatic positions.

The other dimension contemplated by the statute covers the actions to break into power and displace the national political high command that they qualify as “usurpers”.

The formation of a “National Council for the Democratic Transition” enters there. The members, appointed by the AN, will be responsible for coordinating the actions that produce the political break.

What the document shows about these measures to stop the supposed usurpation is that they aim to determine the process to assign new officials in the Public Powers with the additive of granting “legal incentives” to officials who denounce the Venezuelan State, making special emphasis on those belonging to the FANB (Army).

To close the restitution, the law states that elections will be held “once the conditions of electoral integrity are restored and with them, the citizen’s confidence in the vote.”

This would be achieved by designating five new chairs of the Electoral Power, as is the case in article 17 of the document that also includes the appointment of the Public Defender and the Comptroller General of the Republic.

In this way, previous isolated efforts to install simultaneous structures such as the “Supreme Court of Justice in exile” are centralized. The magistrates of this paratribunal would be reincorporated to the Judicial Power according to the preliminary draft.

CONFISCATION OF NATIONAL ASSETS: FUNDAMENTAL OBJECTIVE OF THE TRANSITION STATUTE

Proclaiming as a representative of the country before the international community, and having been validated as such, would allow appointing members of diplomatic missions and multilateral organizations that put pressure on the agenda of confiscating assets of the Venezuelan nation, intensifying the financial blockade applied by the United States.

Article 9 of the legal draft lists the “legitimate” actions that include the appropriation of bank accounts, the payment of invoices by the government and the management of external public debt, allowing the intermediation of external factors to address the mediated “Refugee crisis.”

The collaboration in the fight against corruption accompanied by the timely armed record against Venezuela is the excuse for the deputies to build the legal bridge necessary to channel these national resources seized abroad to the new parallel institutions that the United States endorses.

On this the Secretary of State, Mike Pompeo, celebrated the creation of a Fund for Asset Recovery product of corruption, proposed from the ranks of the political party Voluntad Popular in the AN (National Assembly).

Pompeo, who also maintained communications with Guaidó, referred to Venezuela saying it was time to “begin the orderly transition to a new government.” The State Department works diligently to consolidate the establishment of a parallel government.

WHY IS THE ARMY CALLED (AGAIN) TO THE CUP AGENDA?

The route now focuses on achieving a consensus of approval by the rest of the nations that guarantee authority in matters of sensitive sovereign decisions and the deterioration of the Venezuelan government.

Using the experience in Libya as the only reference model with the establishment of the “Libyan National Transition Council” and its recognition in the General Assembly of the United Nations, it may be that in the attempt to materialize this action it is about taking care of the forms, reducing the negative reactions in the international community, taking into account the rejection of the interventionist policies that the United States receives.

The United States has to tie the loose ends in order to establish solid relations with the neuralgic aspects of the State to make the overthrow of the Venezuelan government irreversible. That is why the document drafted by the National Assembly tries to emphasize the reconciliation with detractors of the military institutions that collaborate in the transition process.

The current attention of the opposition political actors in convening the FANB with greater impetus than ever confirm that urgency. The violent escalation, which until now is projected with the support of Brazil and Colombia, of having an army composed of dissenting figures from the FANB, would encourage the narrative of internal forces in an attempt to disguise the marked foreign intrusion.

The turbulent Libyan result that produced an immediate rectification of the powers, especially Russia, in the development of the Syrian war, does not leave room for errors in the steps to be taken regarding Venezuela. The lesson learned by the countries that make up the multipolar world would not allow a unilateral action typical of a hegemony that is currently weakened.