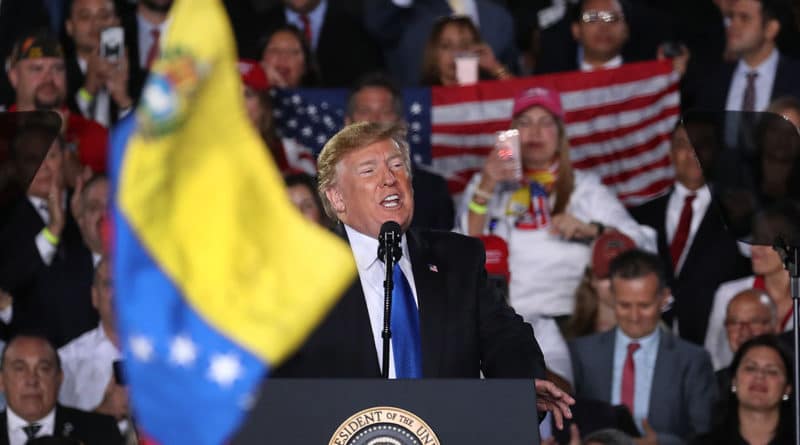 The frustrated incursion of a group of mercenaries trying to land on the shores of Macuto, La Guaira state, is the umpteenth proof that the United States is a “rogue state”; that is to say, a country that systematically violates international legality and in doing so endangers world peace. The attempt at dawn last Sunday confirms that the White House persists in its criminal attitude of continuing with the blockade and trying by any mean to overthrow the governments of Cuba, Venezuela and Nicaragua. And it insists on this attitude in the midst of the disaster that the pandemic is causing in its country (69,000 dead and more than 30 million unemployed). Unfazed by the chaos,[1] The objective of this first attack was to test the FANB (Bolivarian National Armed Forces) response capacity, its cohesion against the invaders and its eventual vulnerability to the temptation of that the millionaire reward offered by Washington. Not to be confused: what happened in Macuto is not an isolated incident but a cog in a meticulously conceived plan and whose final outcome, in the feverish hallucination of those who devised it, is the kidnapping or murder of President Nicolás Maduro and the solidifying of the so longed for as elusive “regime change.” In fact, the day after the first incident in Macuto, a new mercenary collective was intercepted and subdued by popular fishermen militias in Chuao, in the coastal region of Aragua State.[2]

There is no doubt that the scale of this operation was incomparably less than that launched by a group of Cuban counterrevolutionaries at the landing of Playa Girón on April 15, 1961. On that occasion, some 1,400 men, more than a dozen planes, were mobilized, transport and bombers, numerous ships, tanks and impressive weaponry. The overwhelming response of the Cuban Revolutionary Armed Forces prevented the invaders from achieving their first strategic objective, preamble to other more ambitious ones.

The Macuto thing had another dimension, but one should not fall into the error of believing that this was the whole plan. In fact, the new foray into Chuao proves what we have been saying. Both operations are “test balloons” to measure the speed and forcefulness of Chavismo’s response and, also, distracting operations to facilitate the eventual entry of mercenary contingents – “private military contractors”, according to United States law, such as Academi (former Blackwater) and Triple Canopy have thousands of troops – regularly hired by the CIA and the State Department to carry out what are euphemistically called “special operations.” For example, organizing micro-operations on the long Atlantic-Caribbean coast of Venezuela or along the extensive Colombian-Venezuelan border (2. 219 kilometers) that offers many alternative routes of illegal and difficult to detect entry. Of course, the narcogovernment of Iván Duque in Colombia will do absolutely anything that is requested by Trump, as he is aware that if he and his political boss, Álvaro Uribe Vélez, disobeyed the order, they could end their days in a maximum security prison as former Panamanian President Manuel Antonio Noriega did. On the other hand, the fact that the Fourth US Fleet has been patrolling the Caribbean Sea for the pretext of dismantling drug trafficking networks when DEA reports indicate that 93% of cocaine entering that country -this cannot be forgotten- does it from Colombia and via the Pacific Ocean. That vast naval deployment was designed to provide logistical support, and eventually troops and equipment, to the disrupted operations in the last hours. The situation, therefore, is extremely serious and the lack of coverage by the press is the best proof that they want to minimize the danger for the Bolivarian government to lower its guard and make them think that the worst is over. Such attitude greatly underestimates the leadership of Nicolás Maduro and the patriotism of Venezuelans who, if the attack occurs, will lead to a tremendous defeat for the invaders. It would be good for someone to tell the ignorant of Trump what happened to the United States in Playa Girón and in Vietnam.

The media hitmen of the empire say that the attacks on Venezuela have the approval, or at least the acquiescence, of the “international community”. But it happens that such a community does not exist and is a deceptive entelechy. This is how it was described by an American expert, Samuel P. Huntington, a conservative but little friend of the “post-truth” and propaganda schemes of the right. He wrote that “American leaders constantly say they speak on behalf of ‘the international community.’ But who do you have in mind? China, Russia, India, Pakistan, Iran, the Arab world, Latin America, France? Could it be that some of those countries or regions perceive the United States as the spokesperson for a community of which they are integral parts? The community on whose behalf the United States speaks includes, at most, to its Anglo-Saxon cousins (UK, Canada, Australia, New Zealand) … Germany and some small European democracies … Israel on issues related to the Middle East and Japan. They are important states, but they are far from being the “global international community.”[3]

Despite this, Trump and his followers of the Fundación Libertad continue to say, for example, that Juan Guaidó or the blockade on Cuba and Venezuela are supported by “the international community.” Or accusing Latin American governments of being “populist”, “authoritarian” or violators of the separation of powers, who prioritize the health of their populations instead of guaranteeing the free operation of the markets, something that for Mario Vargas Llosa and his troop of unpresentable politicians beginning with Álvaro Uribe Vélez, José María Aznar and Mauricio Macri, reflect the aspirations of the “international community.” They lie knowingly and should remember, before they have an abrupt awakening, the wise sentence of Abraham Lincoln when he said that: “You can fool all the people some of the time and some of the people all the time, but you cannot fool all the people all the time.”

In the face of this Washington offensive, the first thing that is needed is to close ranks in defense of the Bolivarian government. The interference of the United States and its Colombian pawn in Venezuela’s internal affairs is absolutely inadmissible and must be strongly condemned. This is a categorical imperative, with Kantian roots, essential to prevent the international system from unleashing an irrepressible spiral of chaos, violence and deaths. Second, any eclectic attitude or one that seeks to appeal to an imaginary neutrality should also be unacceptable, least of all in times of a universal pandemic. And if some rulers go astray, either because they yield to the coercion of the White House or because of their own ideological weaknesses, they should know that popular rejection of such behavior sooner rather than later could cause the collapse of their governments. Third and last: to strengthen the coordination mechanisms through the Internet that we have been forced to use due to the quarantine to form a great movement of continental opinion repudiating the North American offensive against the Bolivarian government and, of course, of Cuba, Nicaragua and Iran. And, we would add, against the economic sanctions policies against Russia and China and the “extraterritoriality” of the laws of the United States that exacerbate the already dangerous tensions of the international system. We have learned that even when we cannot physically meet, we can do so virtually, and promote self-defense initiatives that prevent capital from using the ravages of the pandemic to rebuild, in an even more authoritarian key, its domination over the peoples. This “digital associativism” can and should become a significant contribution to facilitate the international coordination of anti-imperialist struggles and the ideal instrument to fight the lies and media manipulations with which they want to subjugate us.

Notes
[1] Cf. María Fernanda Barreto, in Correo del Alba , March 26, 2020, accessible at: https://correodelalba.org/2020/03/26/trump-abre-la-licitacion-para-la-invasion -military-to-venezuela-in-the-middle-of-the-pandemic / The figure of 55 million dollars results from adding the 15 million offered for the capture (or murder) of Nicolás Maduro to which the 10 million are added for Diosdado Cabello and Tareck El Aissami and, in addition, for the traitors Hugo Carvajal and Clíver Alcalá who will surely want to capture them alive. Cf. the data in the Colombian newspaper El Tiempo : https://www.eltiempo.com/unidad-investigativa/quienes-estan-con-maduro-en-el-cartel-de-recompensas-de-ee-uu-477386
[2] https://twitter.com/oriolsabata/status/1257378597439967239
[3] Cf. “The lonely superpower”, in Foreign Affairs , March-April 1999, Vol. 78, Number 2