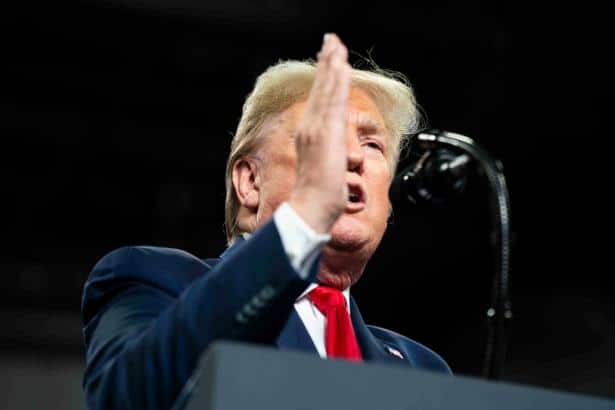 Trump’s adoption of smears, combined with a shift in rationales for the killing of Qassem Suleimani, appears to reflect alarm that he is losing the Iran messaging battle.

After insisting for almost two weeks that he ordered the assassination of the Iranian general Qassem Suleimani to thwart an imminent Iranian-inspired operation, or operations, that could have killed hundreds of Americans, Donald Trump changed tack on Monday. In a series of statements, he claimed that Suleimani’s history of orchestrating attacks on American soldiers and installations was sufficient to justify his killing, and he also suggested that Democrats who questioned his judgment were giving succor to terrorists.

In one of a barrage of Twitter posts on Monday morning, Trump said, “The Fake News Media and their Democrat Partners are working hard to determine whether or not the future attack by terrorist Soleimani was ‘imminent’ or not, & was my team in agreement. The answer to both is a strong YES., but it doesn’t really matter because of his horrible past!” Later in the day, Trump told reporters, “We killed Soleimani, the No. 1 terrorist in the world by every account. Bad person. Killed a lot of Americans, killed a lot of people. We killed him. And when the Democrats try and defend him, it’s a disgrace to our country.”

The Democrats haven’t been trying to defend Suleimani, of course. “No American will mourn Qassem Solemaini’s passing,” the Presidential candidate Joe Biden said in one of the first Democratic responses to the January 3rd drone strike. “He deserved to be brought to justice for his crimes against American troops and thousands of innocents throughout the region.” Other Democrats made similar statements. But Democrats have also pointed out that the Administration has failed to provide any convincing evidence to back up Trump’s claim that the Iranian was plotting imminent attacks against Americans. Some of them, including Nancy Pelosi, the Speaker of the House, have made the argument that killing Suleimani was a dangerous escalation that has created greater danger for Americans, especially American service members in the Middle East.

When Trump feels challenged, he doesn’t let the truth or common decency or respect for his office impair his demagogic response. Last Thursday, he told reporters, “You know what bothers me? When I see a Nancy Pelosi trying to defend this monster from Iran who has killed so many people.” Pelosi didn’t defend Suleimani. “In fact, we were not able to find any examples of Democrats who have defended or ‘mourned’ the death of Iran’s top military commander,” FactCheck.org reported last Friday. But, of course, this admonition didn’t halt Trump’s efforts to demonize the Democrats. On Monday morning, he retweeted a Photoshopped image of Pelosi and Chuck Schumer, the Senate Minority Leader, wearing traditional Islamic headwear, with an Iranian flag behind them. The caption on the tweet was “The corrupted Dems trying their best to come to the Ayatollah’s rescue. #NancyPelosiFakeNews.”

Appearing on Fox News, Stephanie Grisham, the White House press secretary, didn’t just defend Trump’s inflammatory retweet. She sought to expand upon it, saying, “I think the President is making clear that the Democrats have been parroting Iranian talking points and almost taking the side of terrorists and those who are out to kill Americans.”

Trump’s explicit adoption of McCarthyite smears, combined with the shift in rationales for the assassination of Suleimani, appeared to reflect alarm that he is losing the Iran messaging battle. This past weekend, an ABC News/Ipsos poll showed that a majority of Americans agree with the Democrats: fifty-two per cent of the respondents to the poll said that killing Suleimani made America less safe. And, on the same day that the poll was released, Trump’s own Secretary of Defense, Mark Esper, stated publicly that he hadn’t seen a single piece of intelligence that backs up Trump’s claim that Suleimani was plotting to blow up four American Embassies. “I didn’t see one with regard to four embassies,” Esper said on CBS’s “Face the Nation.” (He hastily added, “I share the President’s view that probably—my expectation was they were going to go after our embassies.”)

Esper’s admission was only one of many developments that have undermined Trump’s initial explanations. On Monday, there was another one. NBC News reported that Trump gave provisional authorization for the killing of Suleimani seven months ago, “if Iran’s increased aggression resulted in the death of an American.” Citing five current and former Administration officials as sources, the NBC News story went on to say that the June Presidential order “came with the condition that Trump would have final signoff on any specific operation to kill Soleimani.”

Trump hasn’t disavowed his claim about an attack on four embassies being imminent, and he surely won’t. However, his Administration is clearly looking to make a case for the strike on Suleimani that doesn’t hinge on the danger of an imminent attack. In a speech on Monday, Mike Pompeo, the Secretary of State, argued that Suleimani’s elimination was part of a broader U.S. strategy for “reëstablishing deterrence—real deterrence—against the Islamic Republic of Iran.” During a press conference at the Justice Department, William Barr, the Attorney General, also weighed in, describing the question of whether there was an imminent threat as “a red herring.” Barr said, “I think when you’re dealing with a situation where you already have attacks under way, you know there is a campaign that involves repeated attacks on American targets, I don’t think there is a requirement, frankly, of knowing the exact time and place of the next attack. That certainly was the position of the Obama Administration when it droned leaders of terrorist organizations.”

The Obama Administration didn’t drone a sovereign state’s top general. Nor did it needlessly create a war scare with Iran that could have easily escalated into a full-scale conflict. Just how easily became clear on Monday when reporters visited the Ain al-Asad airbase, in Iraq’s Anbar Province, which Iran hit with a barrage of missiles last week. Contrary to initial reports, the Iranian weapons caused extensive damage, which included the destruction of a dormitory that housed U.S. service members. “A lot of people would have died if we hadn’t moved,” U.S. Army Sergeant First Class Dan Kvasager told Richard Engel, of NBC News.

If the Iranian missile strike had resulted in multiple American deaths, we’d probably be on the way to war with Iran now—and Trump would be busy lying about how it came about.

John Cassidy has been a staff writer at The New Yorker since 1995. He also writes a column about politics, economics, and more for newyorker.com.