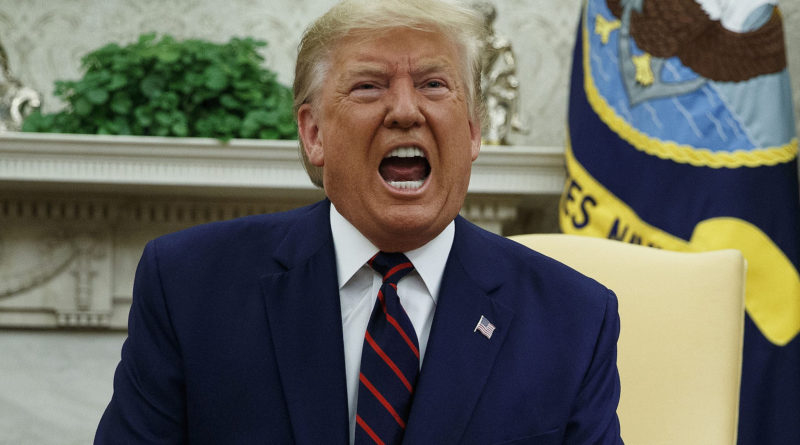 A new research report from a leading journalism organisation says President Donald Trump’s attacks on the news media have endangered American democracy and imperilled press freedom in other countries.

The report from the Committee to Protect Journalists (CPJ) catalogues a lengthy list of Trump’s anti-press behaviours, from repeatedly tarring credible reporting with charges of “fake news,” to trying to bar reporters from the White House, to scrubbing or withholding information from government websites.

Mr Trump’s attacks on the news media have “dangerously undermined truth and consensus in a deeply divided country” at a time when the nation faces the unprecedented challenge of the coronavirus, concludes CPJ, a New York-based organisation that monitors press issues around the world.

Its report, titled “The Trump Administration and the Media,” documents such Trump administration practices as using US Customs and Border Protection to question journalists and search their electronic devices at border crossings; Mr Trump’s calls for boycotts of news organisations and for changes in libel laws to punish reporting he doesn’t like; the ending of formal White House press briefings for more than a year; and Trump’s repeated lies to discredit accurate reporting.

It also cites the president’s harassment of media companies – he has threatened regulatory action against corporate owners – and his re-election campaign’s recent lawsuits against The Washington Post, the New York Times and CNN for opinion columns it disputed.

Mr Dubke, who largely defended Mr Trump’s approach to the news media in the report, nevertheless endorsed its conclusion that Mr Trump has emboldened foreign leaders to crack down on their own news media. “What concerns me is that authoritarian leaders who had already placed restrictions on their press are using president Trump’s words to justify what they are doing,” he is quoted in the report as saying. “It’s convenient for them to do so.”

The report was written by Leonard Downie Jr, the former executive editor of The Washington Post and now a journalism professor at Arizona State University. Mr Downie was the author of a CPJ report in 2013 that criticised the Obama administration’s “aggressive” prosecution of suspected government leakers and investigation of journalists who reported on the leaks.

“I hope this (report) helps people will see what’s going on,” Mr Downie said in an interview.

“People can see Mr Trump’s attacks on the press, but not really know their impact” or scope, he said. “You can be aware of the drip, drip, drip of this every day, but not see the whole picture, which is shocking.”

Mr Trump’s habit of telling “the same lies over and over again,” combined with conservative lawmakers’ efforts to restrict voting rights, raise doubts about whether the November election will be conducted fairly amid the coronavirus pandemic, Mr Downie said.

RELATED CONTENT: The White House and Western Media are Smearing, and Humiliating the WHO: It Will Backfire!

Public attitudes toward the media have remained generally stable during Mr Trump’s presidency, although public-opinion polls have shown a deepening partisan split, with self-identified Republicans far more likely to express distrust in news reporting than Democrats.

This split was reflected in a Pew Research Centre survey about the virus in mid-March: At a time when Trump was still minimising the risks of the pandemic, only 33 per-cent of Republican and Republican-leaning voters said the outbreak was a major threat to the health of the US population, compared with 59 per-cent of Democrats and Democratic-leaning independents.

The report says the Environmental Protection Agency and Interior Department are among the federal departments and agencies whose websites have been scrubbed of information about several controversial subjects, such as climate change, corporate taxation, the Affordable Care Act and LGBTQ+ issues. At the same time, less information is available online about officials’ schedules and visitors to the White House and cabinet departments, it said.

The report documents a series of attacks by Mr Trump or his administration against the owners of media organisations in an apparent attempt to punish them for unfavourable coverage.

In May 2018, for example, The Post reported that Mr Trump had urged the US Postal Service to double the rate it charges Amazon and other firms to ship packages, a move that appeared to be aimed at Amazon’s founder and chief executive, Jeff Bezos, who owns The Post through a company separate from Amazon.

Mr Trump was also critical last year of Amazon as the Pentagon was about to award a $10 billion cloud-computing contract. After the contract was awarded to Microsoft, Amazon filed a formal protest, saying Mr Trump’s “repeated public and behind-the-scenes attacks” on Amazon had swung the contract to Microsoft.

What’s more, Mr Trump has threatened to remove the broadcast licenses of TV station owners, such as NBC, after critical news reports, and made multiple statements critical of AT&T as it was seeking to acquire Time Warner, the parent of CNN. His Justice Department subsequently challenged the merger, arguing that the company should be required to sell the part of Time Warner that operates CNN as a condition for approval of the deal. Two federal courts rejected the argument, clearing the way for the merger.

Mr Trump’s deployment of the term “fake news” has encouraged authoritarian leaders in other countries to invoke the same phrase to justify press restrictions in their countries, the report said.

It noted that between January 2017 and May 2019, 26 countries enacted or introduced laws or rules restricting online media and journalistic access in the name of preventing “fake news.” The leaders of Poland, Hungary, Turkey, China, the Philippines and Cambodia are among those who have cited Mr Trump and “fake news” to criticize or restrict the press in their countries.

While the report primarily focuses on Trump, it also offered some criticism of the American news media. It said news organisations have contributed to a blurring of the lines between fact and opinions by mixing opinion, analysis and conventional reporting in articles and in cable TV panel discussions.

The organisation made nine recommendations to the Trump administration, including that it refrain from “delegitimizing or discrediting” journalists, “not least during a public health crisis like the Covid-19 pandemic.”

The White House didn’t respond to a request for comment.