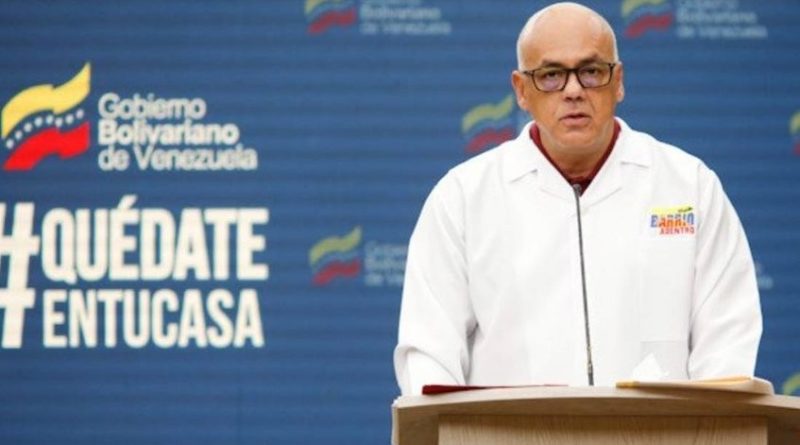 Venezuela confirmed a total of 62 new Covid-19 cases on Friday, bringing the number to 944 infected, reported the Minister for Communication and Information, Jorge Rodríguez.

In statements broadcast by Venezolana de Televisión, Rodríguez explained that eight are of community transmission, 44 are imported cases and 10 are due to contact with international travelers.

He explained that of the 44 imported cases 42 are from Colombia, of them 25 entered through Táchira and 17 through Apure and 2 returned through Brazil.

RELATED CONTENT: Reopening Plan in the Making in Venezuela

Regarding the 10 contacts with international travelers, the minister was energetic in calling security personnel, doctors and collaborators to respect the sanitary protocols for the cases of Venezuelan migrants coming back to Venezuela across the border.

Of the contacts with international travelers, 6 of them are officers of the police stationed at the Santa Elena de Uairen checkpoint in Bolívar state and 4 are collaborators in FASI (an agency dealing with migrants returning and under quarantine) posts in Lara state.

He stressed that Venezuela is the only country in the world that in recent weeks has received more than 47 thousand people returning to their country, which increases the exponential curve of the pandemic due to the arrival from countries such as Brazil, Colombia, Ecuador and Peru.

He added that since May 9, 556 cases have been detected in the country, 441 of which are imported.

Of the 8 cases by community transmission, five are from the Casacoima municipality of the Delta Amacuro state, a locus that involves health personnel apparently infected when treating patients with Covid-19.

The Venezuelan government has carried out – as of this Friday – 735,426 tests for the detection of the Covid-19 coronavirus in the country, this figure is equivalent to 24,514 tests per million inhabitants.